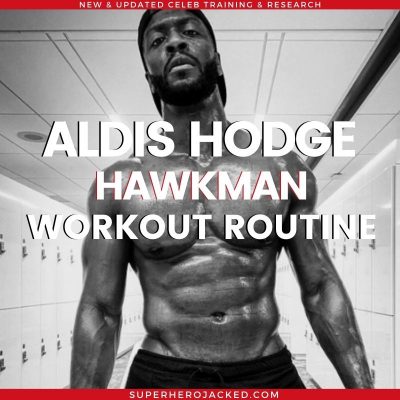 I’m not sure if you realized, but Aldis Hodge is JACKED!

He’s set to star as Hawkman alongside Dwayne Johnson’s Black Adam and I suppose when you have Dwayne Johnson next to you it’s motivating to keep chugging alongside your team working just as hard.

Hodge was nice enough to hop on a video with Men’s Health and give us some insight into how he has been training to unlock the Hawkman physique!

In the video Hodge takes us through a chest day, which is actually what I shared of Dwayne Johnson’s Black Adam training above as well.

If you guys want a full weekly Dwayne Johnson Workout and Diet Plan we do also have a handful of research on all things “The Rock” – and I’m sure we’ll see more of Hodge in the future as well.

Hodge starts us off by telling us about what he’s going to be sharing, stating:

“Today we got a big chest day. We’re going to work a few different ways, a couple different areas of the chest; poppin’ the pecs!”

From there he goes on to acknowledge something I was mentioning with Dwayne Johnson and a jacked team by saying:

“I’m out here of course working on the fantastic Black Adam.  The thing I gotta say about this production is everybody is fit.  From the top down. There’s so much inspiration walking around set 24/7 that it keeps me motivated, it keeps me hyped, it keeps me focused!”

This is something we do our best to replicate within The SHJ Academy as well.

Because, in reality: fitness doesn’t have to suck. And simple does not mean ineffective.

Before finally moving into his workout Hodge also talks about his character Hawkman:

“I get to play Hawkman, who is fantastic. But this brother is ripped. He’s a tank. So I definitely had to kick up my whole workout regimen in a completely different way. You know, this shoot is what? Maybe five or six months. That’s continual upkeep. That’s consistency. That’s making sure my body is primed and ready to go whenever we have to go.

He then goes into the workout, and it’s a good one!

This workout is shared by Men’s Health, Uli Latukefu and Maile Latukefu!

Hodge says the bike saves him from running because he hates running!