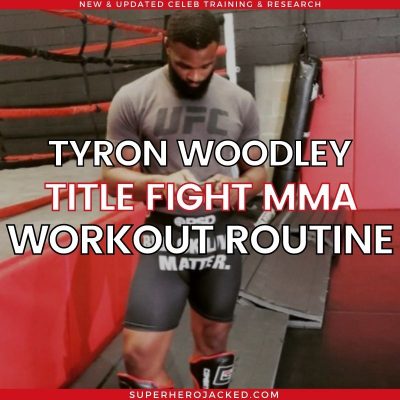 Tyron Woodley joins the growing list of fighters that have been making their way into our Workout Database.

We made it a priority to research more and more professional athletes this year after researching hundreds of celebrities and their workouts, nutrition, and daily life – and Woodley is a great example of a stellar athlete that we can learn from.

We’ll actually be pulling from Muscle and Fitness as our main source, as they did an interview with Woodley and he even shared the workout he utilized to train to prepare for his UFC Title Card.

Here’s how M&F leads off the article to tell us a bit about Woodley:

Tyron Woodley has spent the past decade becoming one of the top draws in mixed martial arts—first as an up-and-coming rookie in 2005, then as a UFC contender in 2013, and since 2016, as UFC welterweight champion. Early on, T-Wood kept fans on the edge of their seats. His versatility, jaw-dropping athleticism, and knockout power put asses in chairs and opponents to the canvas. At press time, he had an 18-3 record, with 11 finishes (submission, knockout, technical knockout), but he began losing favor with fans after claiming UFC gold last year.

They continue on with a ton of information about Woodley, but then work their way into more about what he tells them about his training regime.

Prior to switching up his training to specifically function around his MMA career he was using big heavy lifts, as he would say “football lifts”:

“When I first got to Mizzou, everyone did the same football lifts—Olympic lifts, squats, bench presses, and deadlifts,” Woodley says. For those of you wondering, yes, T-Wood is as strong as he looks. At 165 pounds, he squatted 425 pounds for five reps, benched 365 for five, and deadlifted “600 or 605…something crazy.” An elite athlete to boot, he also boasted a 43-inch vertical jump.

He continues on to discuss how he skips the heavy lifting and it’s all entirely geared towards his functionality as a world class fighter:

Those days are long in the past. Now Woodley forgoes heavy weights altogether and focuses on his agility—with ladder and band work—and conditioning. “Now I don’t need to be underneath anything more than 185 to 200 pounds,” he explains. “I don’t need more muscle. I need endurance. I need explosion. I need quick feet. So that’s why I’m hitting the agility ladder, pushing a sled, doing sprints, and slamming the medicine ball. These are the things that I can do and still perform at 100 percent.”

And he was awesome enough to share a full body workout that he used specifically to prep for UFC 228.

Be warned: it is intense!

This workout is shared by Muscle and Fitness.

Perform exercises marked with the same number back-to-back, with no rest in between. After each circuit/superset is complete, adhere to the prescribed rest time.

*Begin each set with a 5-second isometric hold at the top.