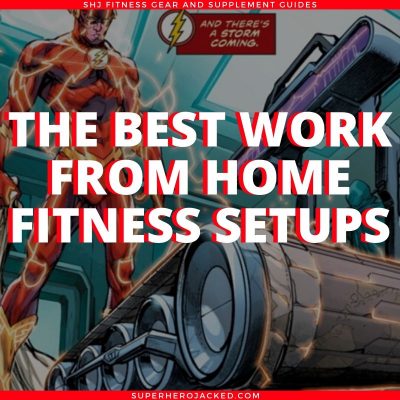 Regardless of whether you’re stuck at home working due to the current situation the world is going through, or just want to get in some fitness while you’re playing video games or “working” after normal shifts; this post is for you.

Normally I do minimum 30 minutes of cardio a day. Normally.

Now I’ve been averaging about 60-180 minutes on the bike…daily.

But that doesn’t mean I’m going all out intensity like an absolute crazy person (so hold your comments about over training and being silly; it’s OKAY!).

I work, read, play video games and do essentially anything I would be doing at my desk (minus playing certain video games from my awesome PC setup with trip monitors….) while burning calories.

Yesterday I burned about 400 EXTRA calories (extra because I’m still training from home as well) just because I was moving my legs a bit while I worked.

If you guys want to really sync up and start training from home as well, I have a couple helpful articles already up, and will also share my current programming:

But, okay, let me tell you a bit of what I’m currently working with. 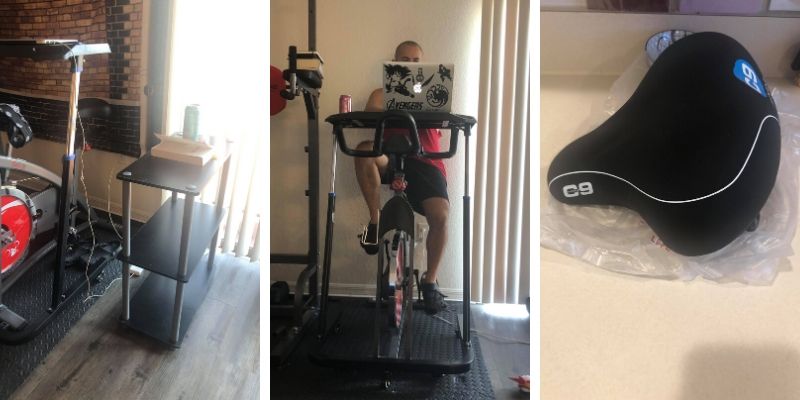 These pictures show not only my current bike and bike desk setup that allows me to work while burning hundreds of calories, but also some of the upgrades I’ve added to my work from home, home gym.

And, don’t worry, I’ll go into detail about each choice I made while purchasing.

I’ll also be sharing some of the best alternative options I’ve come across along the way as well.

And, spoiler alert, if you’re looking for those, they’ll come after I discuss my current setup, which I personally think is the absolute best bike desk bang for your buck.

We’ll start with the most obvious: the bike.

After a bunch of research on the right bike to purchase, I narrowed it down to a two brands:

I scoured the internet for reviews and forums specifically there from users who had experience with multiple brands and seemed to be “bikers”.

Of course, there is a chance I missed one or two great options out there that could make a top five list, but I’ll share the simple alternatives later.

For example, I’ve seen that a Peloton desk addition is pretty simple and easy.

The issue is: Peloton and Nordic Track are usually thousands of dollars, so the fact that the desk addition is easy and fairly inexpensive (similar to something like this) does not make up for the fact that you just spent $2,000 extra on the bike.

So I researched some more to make sure my research was strong, and narrowed it down to Sunny Health and Fitness.

Then you come across about 2-4 different selections from SH&F you can choose from that I felt are within the class (good enough) that I’m wanted to achieve.

From there the main differences were:

Please disregard how dirty the monitor is.  I took this picture while riding the bike with the desk above the monitor very quickly to give you guys an idea of what I’m talking about.

As you can see, without having to purchase an additional piece, the bike I comes with a tracker that shows: Time, Distance, Calories Burned, and Speed.

And, I don’t know about you, but even if some people don’t think this is that important, it’s absolutely necessary for me.  It makes it super easy for me to mentally keep track of goals and daily checkpoints I’d like to hit.

To add to that point, I do want to make it clear that it is pretty easy to add a monitor to your setup yourself, but with the price ranges being so similar, and the belt drive already pushing me in that direction, it felt like an obvious choice to go with this one.

So with those two distinctions I was able to narrow it down to the perfect bike: Sunny Healthy and Fitness Indoor Cycling Bike, Belt Drive.

Since purchasing, I have made a few upgrades.

The obvious one being the desk and the seat that are both shown within the picture above.

I’ll break down all three upgrades that I’ve made, and why I made these choices:

Oh, and to answer what some of you might be thinking: Yes, the desk is extremely easy to maneuver around just like the bike itself.

We move it around the house and in front of the TV all the time.

Here’s an example, with the right side being where we usually have it setup, and then the left of Ryan after having moved it around to watch My Hero Academia. 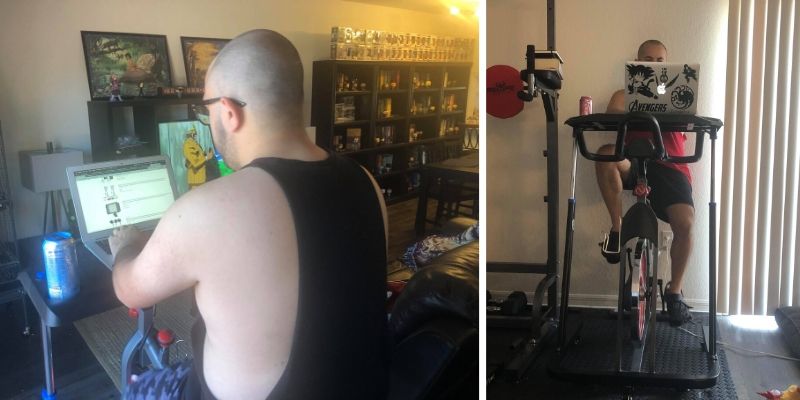 As I mentioned above: at the time of writing this article there is limited availability (due to COVID-19 and everyone wanting to purchase home gym equipment), so even the following list of alternatives is going to be very limited.

The good news is that there are still Sunny Health and Fitness [alternative options] available on Amazon, and also all the upgrades I’ve made, including the desk/workstation (which is the most important part after the bike), and the new seat and pedals, which should easily attach to most models.

That being said, I will do my very best to list some alternatives.

I want to start by linking to some alternatives that I ultimately decided to pass on, but feel I should still show you.

These are bike or even treadmill stations that already have the desk built into them, but I felt I was losing out on the quality of the bike itself to gain the desk setup, which all in all did not seem that great.

I don’t want to give anymore options that I haven’t personally tried myself, so please do note that this below list is to give you ideas for alternatives, not that I specifically recommend them.

I specifically recommend the first variation that I”m calling “The Best”, if that was not clear.

Get to work, burn those calories, and enjoy!