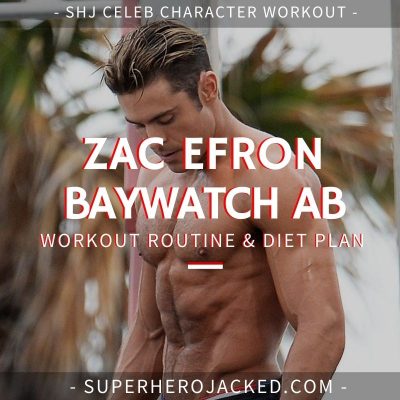 First we got our Bruce Lee ab workout and now it’s time for a Zac Efron ab workout.

We have actually seen a few articles about Zac Efron…

Starting with our Zac Efron Workout Routine and Diet Plan after he showed off his transformation in Baywatch, which was EXTREMELY popular among The SHJ Army, we also had a Zac Efron Calisthenics Workout and even a workout Zac did with Juju Smith-Schuster!

Luckily for us, Zac Efron is pretty awesome about sharing the workouts he does.

And, he even invites other celebrities along with him on his YouTube Channel!

With nearly 1.5 million subscribers he’s doing a bit better than ours…

The workout routine, as you’ll find it, is pretty tough but also super fun and fairly simple.

There is some scaling you’ll need to do if you’re going to be doing the workout without a partner, but it shouldn’t be an issue for you, and if anything it makes scaling it down for beginners even easier.

If that wasn’t clear: it actually becomes harder with a partner, which is awesome considering you’ll have the extra motivation!

This is a full ab workout Zac Efron and Alexandria Daddario did together while preparing their core for Baywatch!  Efron was nice enough to share this workout with everyone to try, so you can go ahead and give it a shot with a partner or even solo!

Done as a Partner Workout or Solo

(Exchange KB or Medicine Ball Back and Forth)