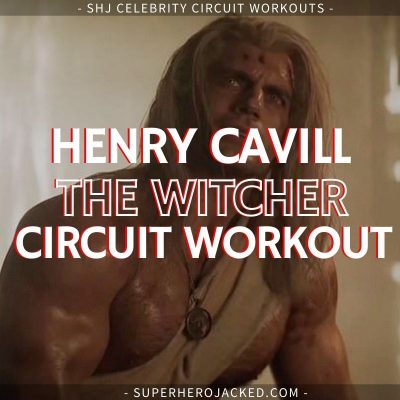 The trend is very, very clear.

We’re seeing more and more of these celebrities opt for high intensity, efficient training to piece in with their workouts.

You can add Henry Cavill’s Witcher Workout to the rapidly growing list of circuits that we’ve seen.

We’ve also hosted multiple workouts already for Henry Cavill, one for Man of Steel and one for follow up roles like Justice League as well:

But now we’re expanding out Workout Database into new worlds and hosting solo circuit workouts from these celebrities as well.

You can check out more celebrity circuits [like this one] here.

As I also mentioned when we recently saw Michael B. Jordan Circuit, and a Mark Wahlberg F45 Workout; these top celebrities are also huge case studies in my book Superhuman Secrets; and driving members of SHJ’s Superhuman System.

But before we get into the actual circuit in which I’m referring to (along with the training style similar to it), let’s see what Cavill and his trainer had to say about it.

Right off the bat he told Men’s Health UK:

“It’s some of the best, or most enjoyable cardio I’ve done,”

Which he follows up by stating:

“It’s only 20 minutes, so it’s not massively exhausting,” he admits. “It’s not like doing HIIT, which, psychologically, can be quite grueling. My heart rate’s at 125-135bpm, so it has a really good effect on fat-loss.”

Men’s Health and Cavill go on to share even more information about his circuit, saying:

“Out of all the things I’ve done in the past, I think the fasted cardio stuff is actually working best for me,” he admits. “I’m in the best shape of my life.” Of course, it’s easy to argue that a Hollywood actor, with the correct time, assets and resources, will find it easier than the average man to get into other-worldly shape. But what if he told you that his day started at 3am?  “Tomorrow, I’ll be up at 3am, before showering and getting to the studio for hair and make-up,”

Now, don’t worry, you don’t actually have to wake up at 3am to get in Cavill shape.

You can still to your normal schedule and throw this killer circuit in where needed.

One Circuit
(To Be Repeated)

All Dumbbells and Jump Rope (Double Unders) for Assault Bike

Steady 5min on a stationary bike, then perform 10m of each of the following before starting: Alternating kicks, high knees, butt kicks, bear crawl, walking lunges and dynamic lunges.

1A: 12 Calories on the Assault Bike