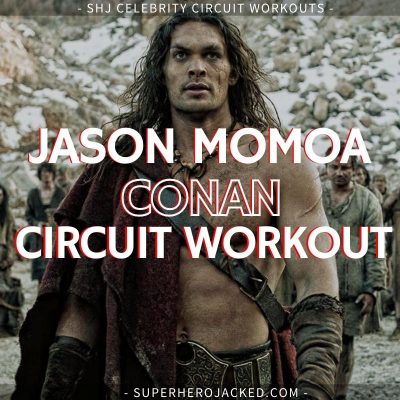 When I first tried Jason Momoa’s Conan Circuit I was ready to fall over.

I will tell you right off the bat that this one is on another level of intensity.

We also have Jason Momoa’s Workout Routine and Diet Plan article that has two workout routines for Momoa and dietary information (including Guiness, of course); but this one is

But now we’re expanding out Workout Database into new worlds and hosting solo circuit workouts from these celebrities as well (including ones we may have already seen, like this one, that deserve their own slot).

You can check out more celebrity circuits [like this one] here.

These workouts are becoming more and more popular among celebrities and the training style is consistently shifting from typical 3-5 day weightlifting splits to circuit training and varied styles that change almost every single day.

I wrote case studies on tons and tons of celebrities who have already made the switch in my book Superhuman Secrets, and our Superhuman System is built with that premise as well.

At the time of his Conan training, Momoa’s trainer states this about sessions with this circuit:

“In 30 minutes, you’ll do 330 reps of three exercises—two to three times more than you’d do in a typical old-school weight workout,” explains Laciste. “But because they’re grouped into sets of no more than seven reps, the focus is still on muscle building.”

One Circuit, Two Variations
(To Be Repeated)

Start with Series A. (Should be on the lighter side – Choose a weight that will allow you to complete the following 7-6-5 progression for each exercise.)

First do seven sets of seven reps of the squat with seven seconds rest between sets.

Once you’ve finished the entire 7-6-5 progression, rest one minute, and then repeat with exercises two and three.

Momoa did these series (which should take around 30 minutes) around 2-3 times a day.

Try to include Series A and B for a complete body workout.

Double Unders (Multiply by 3 if doing singles on jump rope)