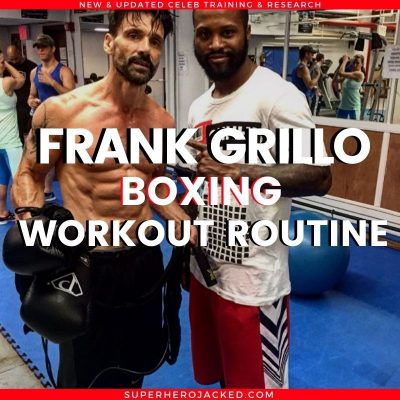 He’s 55 years old, and everyone wants to know “What is Frank Grillo’s workout like?!”

Well, we’re here to talk about it, and it’s not the first time we’re talking about Frank Grillo here at Superhero Jacked.

He is our Crossbones in the MCU, but he’s also much more than that.

He’s a boxer and a fighter, and he plays the role extremely well as well.  He is incredible in Kingdom, Netflix’s FIGHTWORLD, and Warrior which he plays a fight in all; and he has a ton of other roles like in The Purge, Billions, Point Blank and a large handful of new shows and movies coming out as well.

And, as I mentioned, this isn’t the first time we’re seeing Frank Grillo, we’ve already had a full breakdown about Frank Grillo’s Workout Routine and Diet Plan if you want to get more information outside this article.

Spoiler Alert: We talk about how he uses the Paleo Diet in that article, but for this one we’ll be tweaking that information ever-so-slightly with his recent interview.

In his recent interview with Muscle and Fitness Grillo gives them the information that they then share as:

Grillo’s preserved condition surely also owes something to his immaculate diet. He eats no grains,no dairy—“nothing that is post-agricultural revolution,” he says. “All of my meats are grass-fed or wild caught, and they can’t eat grains either.” It might seem limiting, but Grillo says he eats a lot, including lots of fat from nuts, seeds, and avocados. He’s nearly done with his order of salmon and kale at Cheebo, a low-profile organic eatery on Sunset Boulevard, and he says he’ll eat again when he’s hungry. Grillo doesn’t count calories, track his macros, or even weigh himself, and he doesn’t take supplements. “I’ve never done fucking steroids.”

Grillo and M&F continue by stating:

As for his organic, Paleo-esque diet, Grillo says, “I’m the first one to say, ‘That’s a fad,’ but it works. For years I avoided fat, but I was fucking myself up. They tricked us into believing if you ate fat you’d get fat, and it’s the opposite. My cholesterol and blood pressure, all my vitals, have never been better.”

So still Paleo, but with his own little twist.

Continuing on into the training portion of the interview Grillo says:

“I love training more than acting,” says Grillo. “But there’s not a career there for me.” But if he were 20 years old again? “Yeah,” he says, he probably would have tried to pursue boxing. “But then I would have fucked up my life,” he says, laughing.

Grillo and M&F also finish off with one last piece of advice before sharing his boxing workout routine:

Grillo also needs to think about longevity for the sake of his wife and three sons. I ask him if he has any advice for his kids, or anyone, on building the kind of toughness that makes for success. “ Grit…is a word that I love.” He describes how his sons come with him to the boxing gym, and he recently enrolled his youngest son in a kids’ boxing class.

“About halfway through, he was being a pain in the ass. So I pulled him aside and I said, ‘Listen, I don’t care if you don’t like doing this. You don’t have to. But it’s an hour once a week. You can make this fun, or you can sit over there and watch the other kids, but you are never going to quit.’ He went back in reinvigorated. Does he love it? No. But did he understand what I was saying? Yes. And that’s the important thing. Whether you’re in the ring or you’re auditioning over and over again, don’t fucking quit. I know that sounds clichéd, but when you think about it, only good things can happen.”

But, not you’re hopefully ready to get your butt kicked into shape, because Grillo is going to do just that.

Frank Grillo uses this training schedule on a daily basis but switches up his accessory work and constantly varies his training the same way we would within our Superhuman System (with the workout changing every single day).

Frank Grillo shared this workout (as mentioned above) with Muscle and Fitness, and they explain the programming as such:

“Rounds last three minutes, and Grillo rests only 30 seconds between them. After hitting the heavy bag, Grillo rests five minutes before strength training. Sometimes he’ll perform a set of battling ropes between sets of strength exercises for a more active recovery. Grillo changes his workouts constantly, opting for whatever exercises he feels up to on a given day. He performs weight-training exercises for the entire body over the course of a week. Despite having impressive arms, Grillo does no direct arm training and credits his development to boxing.”