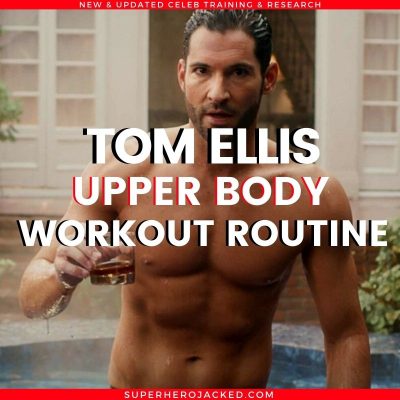 We’ve already had a ton of information about Tom Ellis’ Workout Routine here at SHJ.

But now we’re going to be specifically taking a look at four different exercises that really shaped his upper body during his transformation.

In our original Tom Ellis Workout Routine and Diet Plan we had a ton of information from all different sources and even discussed a ton about his overall diet plan in order to get absolutely shredded for his role in Lucifer.

From there we also broke down his diet plan separately as well to not only take a more zoomed in approach, but also make it much easier for members to find it (as it was a super popular request), which you can find here: Tom Ellis Diet Plan.

If you have seen our Workout Database lately and obviously our new databases like our Celeb Diet Plan Database and Healthy Recipe Database, you know we’re expanding into a ton of different areas.

For that reason you probably noticed we’re doing a lot more singular role workouts and articles that break apart some of these actors individual training resources now that we’re QUICKLY approaching over 1,000 workout routines here at SHJ.

It can be daunting.

For that reason it’s important for me to reiterate (if it wasn’t clear) that if you want a FULL WEEK of training for Tom Ellis then you’re going to want to utilize our original Tom Ellis Workout Routine.

This one is specifically zooming in on one highlighted area for research purposes.

But okay, now let’s dive into some of the information we’ll be utilizing here.

Luckily for us, Mascitti even shared four specific exercises that were his “go-to” movements during Ellis’ training.

Mascitti starts by talking about Ellis’ commitement to his training:

“I don’t need to work hard to motivate Tom when it comes to the gym,” says Mascitti. “He enjoys being challenged, and listens to any instruction I give him.” The training continues over FaceTime when Ellis arrives on set or is traveling, allowing Mascitti to keep the actor on track and making gains remotely.

Ellis has seen the return on his commitment, through the course of their sessions together; the star put on around 20 pounds of lean mass going into the season. The results have been utilized onscreen, with a number of scenes featuring his shredded physique.

This is SO HUGE.

When I first started SHJ years ago one of my main goals was to create motivation by inspiring people with not only superheroes/characters/celebrity workouts, but also with our community inside The Academy.

Now we have THOUSANDS of members working together in there.

We’ve already taken a look at a ton of resources for Ellis’ diet and nutrition, but it doesn’t hurt to take another look.  Here’s what Mascitti says about that:

“Tom likes to indulge himself from time to time and his food habits weren’t the best,” he says. “He also enjoys the occasional beer, but to accomplish what we wanted he had to give that up.” In order to gain mass, they put him on a caloric surplus with a few starches in the mix; but when they got close to filming they took all the starches away.

Breakfast commonly consisted of five egg whites with one yolk and avocado, accompanied by a bowl of oatmeal with berries. Lunch would be a lean protein with sweet potato and quinoa. Dinner would be another serving of lean protein, like a piece of fish, along with some sautéed vegetables. The aim was to avoid processed foods as much as possible. Between each meal, Ellis would have a shake with fruit and a few scoops of protein powder like Ora. Mascitti also had him take BCAAs and Omega-3s.

Finally Mascitti talks about how much him and Ellis focused on sleep and recovery and then he finishes off with:

“Tom didn’t really do pullups as part of his sessions before we started working together,” says Mascitti. “Now he loves them, and likes to push himself as far as how many more he can do every time. That’s just an example of the ways he’s really taken to the challenge.”

So I hope you’re ready for a challenge!

One Day of Training
(To Be Repeated)

Ellis works out 5-6+ days a week to prepare for his role.  If you want the full training you can find it here.  These are just four movements that Ellis and his trainer Mascitti have been prioritizing this time around, with rep scheme included for you guys to utilize in your own upper body training!