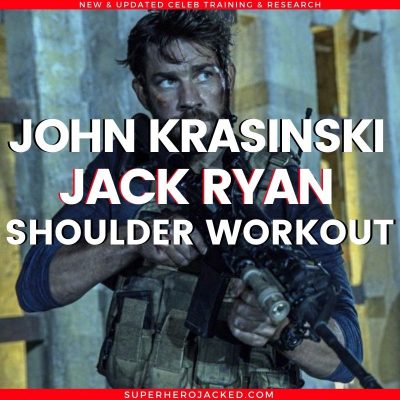 Last week we had a bit of a military theme going, and we’re kind of still on it coming into John Krasinski’s Jack Ryan Workout, but it’s going to be more shoulder oriented, actually.

We’ll be seeing John Krasinski’s shoulder workout for Jack Ryan Season Two, and then directly after we’ll have another big name celebrities shoulder circuit for a huge role as well!

So I hope you’re ready for some upper body work, because we’re pushing some shoulders.

And, if you guys are saying “Hey, haven’t we heard that name here before at Superhero Jacked?”

The answer is yes!

Saladino has worked with actors like Krasinski, Ryan Reynolds, Sebastian Stan and more.

If you want to get an idea of some of his training style I would specifically check out:

And you’ll see a bit of a theme with carries and kettlebells, which Saladino is a fan of.

He said in the interview with Men’s Journal:

“John loves to go heavy when we workout.”

He continued by stating this about Krasinski:

“I have never seen anything like it,” Saladino says, laughing. “It became a running joke where he would walk into the gym and say, ‘Feeling like a PR today.’ But I also made sure that we didn’t push it too hard if he was coming off a stressful day. It’s important to listen to the body.”

Which is why you’ll find a ton of Saladino flair to this workout, but definitely some movements Krasinski could also go heavy on as well!

This workout is shared by Men’s Journal but courtesy of celeb trainer Don Saladino!

Salandino’s note: Go heavy on Military and Savickas but don’t max out.