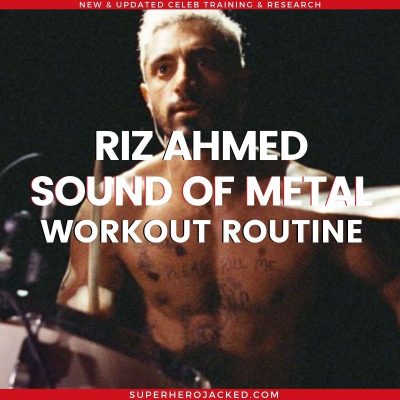 In our original Riz Ahmed Workout Routine and Diet Plan article we talked about his training for The Night Of, Star Wars, and Venom.

This time we’ll be zooming in specifically on his training for Sound of Metal, and then I’ll have another article breaking down his diet for previous transformations in comparison to what he did for SOM.

When he was originally bulking up for the previous roles he was focusing in on big compound lifts, cut cardio nearly entirely, and even relied on some yoga and Pilates mixed in as well.

For The Sound of Metal he swapped to training four days a week that revolved around upper and lower body splits.

“I was checking Riz’s weight and body fat percentage at least every other week, so we knew exactly where we was at all times,” says Grant. “Giving the history that Ruben has, the goal was for him to have a seriously striated physique when he showed up on set.”

He breaks it down further and talks about how they eventually upped the training from four days a week to six days a week here:

The training started with a focus on building muscle with traditional movements over the course of four days a week, split between upper and lower body sessions. During the beginning of the program, cardio was kept to a minimum. As the weeks progressed, Grant began to add conditioning to Ahmed’s training, which included everything from foot work to boxing to kettlebell circuits.

During the second phase of the program, the lifting was kept low and more conditioning was introduced. The training was upped to six or seven days a week. Since the exercise was constant, recovery became more crucial, and Grant would step in to perform instrument-assisted soft tissue mobilization on occasion. Wednesdays were dedicated to boxing as a means to dial in Ahmed’s rhythm and get a great shred.

And, we’re lucky enough to even get a full sample workout from Riz Ahmed’s actual training schedule with Grant.

Grant shares a full upper body day with Men’s Journal that Ahmed used to come in lean and shredded, which I’ll be sharing below.

This workout is shared by Men’s Journal but courtesy of celeb trainer Leighton Grant II!

A. Plank with Hip Hike