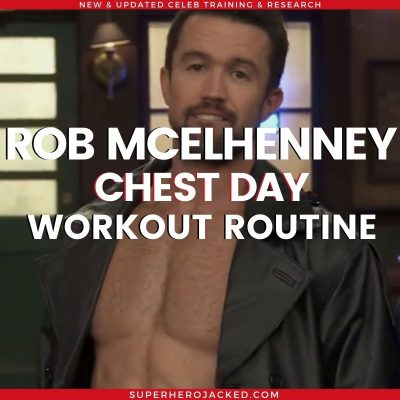 If you missed our original Rob McElhenney research article: he got jacked.

In our first (and more in depth) Rob McElhenney Workout Routine and Diet Plan we broke down anything and everything from workout to nutrition.

This time we’re going to be to be taking a look into Rob McElhenney’s meathead chest day!

And, I specifically make note that it’s meathead structured because of what he says in his video.

McElhenney recently hopped on a video with his coach Arin Babaian for Men’s Health to give us a breakdown of his chest training – which is actually super high volume bench press, and super low volume overall exercises (as we’ll see more of later).

“I’ve never been an athlete my entire life, and so I have a bit of a chip on my shoulder. Some people might call it a Napoleanic Complex, but I’d tell those people to f*** off!”

He then goes on to explain why he made the swap to heavy bench press:

All in all, he eventually let’s us know that Arin let him do bench press to let him feel better about himself.

McElhenney gets more serious as he moves forward into the video, talking about how much training has helped him with his mental health and stress, especially through the pandemic.

As you’ll notice when we get into the routine: Rob McElhenney really loves bench press.