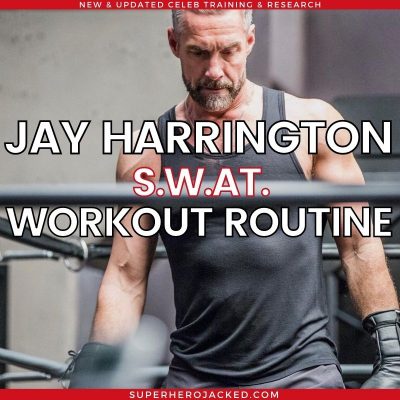 Jay is 49 years old and Shemar Moore is 51 and both are in incredible shape.

We saw Shemar Moore’s workout where he told us the secret to his boxer meets soccer player physique (which he says looks good for TV and feels good for life) is a little cardio, weight training, and cross training.

Now we’re going to take a look at Jay Harrington’s Push-Pull Workout routine that he shared with Men’s Journal.

Before the series kicked off, the cast was put through an in-depth police maneuvers bootcamp. As you’d imagine, the best educator was raw experience. “I put on the tactical gear, picked up the primary weapon, and was shocked by the weight of it all,” says Harrington. The burden became more evident when on set for hours, and getting through the show’s intense action started to take its toll—especially given the star’s almost 50. Bodies don’t recover like they do in your 20s and 30s.

They also go on to give a ton of extra details as to how Harrington and his trainer decided to work around a routine such as this one.

Bolouchi designed a pull-pull program with the purpose of building strength and adding size without getting Harrington too bulky. The trainer’s first move was to dial in the actor’s form and adding variation on classic exercises. This workout is a look into one of those training days, targeting the back and biceps. Move down the list, completing the prescribed number of reps and resting for 60 to 90 seconds between exercises before starting back at the top again. Complete three rounds.

Given that Harrington already spends a lot of time on his feet while filming, they focused more on core than legs. On top of that, one of the actor’s favorite outdoor activities is to run steps in the Santa Monica sun. “I enjoy sweating outside as much as I can,” he says. “These days I’ve found it an important routine for both my mental and physical health.” So if you’re looking for a workout finisher, pound the pavement or find some stairs.

So Harrington is actually moving down each movement one after another and then going back through and then rinsing and repeating for a total of three sets each, or three total rounds.

This is something we do in our 90 Day Systems as well, inside our Academy, and even inside our Assassins Calisthenics Program that has even been used to train new U.S. Marines.

But let’s get into how Harrington does it while focusing on a Push-Pull basis!

This workout is shared by Men’s Journal, Jay Harrington and his trainer Andre Bolourchi.