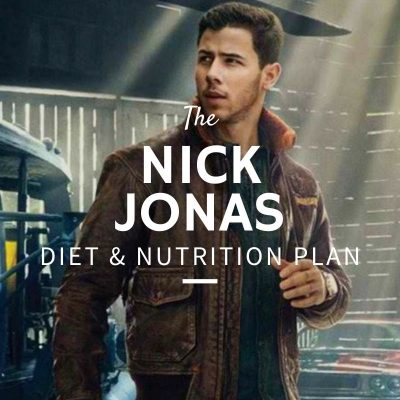 I lead with that, because it’s one of the more important things you should know when going into a diet plan, especially one that goes into a full day of eating, from a specific person.

That being said, he eats extremely healthy and his physique shows the benefits of that.

In an interview with GQ as just one of our many sources we used to build out our original Nick Jonas Workout Routine and Diet Plan Jonas gave us a ton of information.

Here’s what he told them:

“I had about six weeks to put on 12 to 15 pounds of muscle before filming started on [DirecTV’s] Kingdom—my character is a fighter whose strong suits are wrestling and grappling. Diet had a lot to do with it. I went from consuming about 3,000 calories a day to 4,200! Paleta, a food-delivery service, sent me three meals a day and snacks. It was an incredible way to know that I was getting what I need to build muscle and not have to think about it. Breakfast was usually an omelet with veggies and cashew cheese, a turkey-meat patty, and some fruit; lunch and dinner would be lean protein, veggies, and nuts; snacks consisted of things like snap peas with peanut sauce.

And he went on to talk a little bit about being a Type 1 Diabetic as well:

“I don’t have the luxury of eating whatever I want whenever I want anyway, because of my type 1 diabetes, so I have been conscientious about food for a long time. I do have guilty pleasures, though. I wasn’t drinking at all while I was training for the show, but now that we’re done, I keep it classy with Coors Light.

Thankfully for us, Jonas is actually extremely open about his nutrition.

He also shared information about his exact caloric intake as well, which he states:

“I got pretty Hulk-ish. Now that I’m on tour for my album, I’ve leaned out about 10 pounds from what I’d gained. It’s been fun to change my physicality. My meal plan came down to about 2,500 calories, and the portions got really small.

Finishing up with some problem foods for him personally, which was shared in an interview with Men’s Journal:

I include these specifically because his daily meal plan is going to actually consist of you choosing vegetables and proteins for two of your meals, so I want to make sure you know that some of the options are actually cut from his decisions.

This way, if you’re really looking to make the same choices as Jonas, you know which to exclude as well.

Breakfast: Omelet with veggies and cashew cheese, a turkey-meat patty, and some fruit;