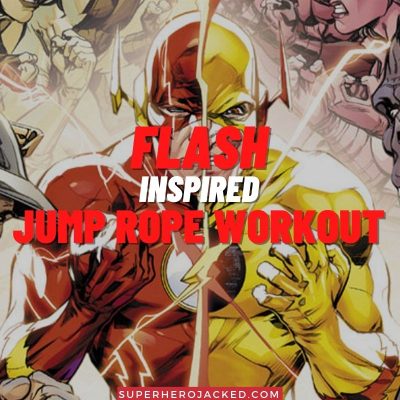 Technically speaking we’re making our way through some of the more popular Marvel and DC heroes and building out our character jump rope database with jump rope workouts inspired by them.

That being said, the more obvious pick here would have likely been Batman, but I really wanted to try to tackle and workout routine based on The Flash that involved no running.

Now the tricky part about that is we’re obviously still using The Flash’s character to build this one out, so we’ll need to take pieces of him and build it, just with a jump rope instead of an open road (or track).

But, before I get too far ahead of myself let me tell you about what we’re actually growing here, now that we’ve seen quite a few.

If you’re a member of The SHJ Army you’ve probably noticed that our Workout Database is growing into all different areas, and jumping rope is definitely one of them.

With our Superhuman System being as successful as it is I recently released our Jump Rope and Calisthenics 30 Day Superhuman Booklet for members to take advantage of as well (after running a 30 Day Jump Rope Challenge inside our Academy) and members have been doing so well it was obvious this new mini-database was needed….ASAP!

And, this definitely isn’t the first time we’ve seen The Flash here at SHJ.

We’ve obviously had a handful of celebrities from The Flash as well, but here are two different takes on The Flash’s character(s):

But now let’s talk about how we’re going to train like The Flash without actually running.

Well, all of our Flash characters are shredded. So that’s one thing we’re immediately going to be looking to achieve.

They’re also, if not obvious enough, extremely fast; so we’ll also still be looking to gain agility and speed.

For the sake of not including running I don’t want to just throw in different jump rope variations and say “Oh, hey! Working on endurance!”; instead I’ll actually be using specific movements that mimic a run to keep us in The Flash mindset.

I’ll also be sticking to a kettlebell workout to pair with our rope so that we’re literally standing in one place, making it that much more challenging to make this Flash inspired!

Our new jump rope workouts can be completed in multiple different formats and are extremely easy to scale.  They emulate our Superhuman System training and are incredible for both beginner and advanced users.  You can complete them by doing the “Rounds” as sets (and breaking in between), or complete the entire thing as a circuit with no break (while keeping track of your time and looking to improve the next time you do it).  You can also scale by dropping the sets, or scaling the movements; as well as adding breaks where needed.

If you want more training similar to this one you can grab our Jump Rope & Calisthenics 30 Day Superhuman Booklet that is built off the aspects we utilize in our Superhuman System and revolves around strictly jump rope and calisthenics to level you up!