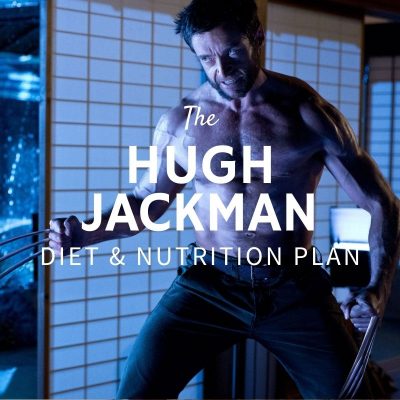 Hugh Jackman’s diet is one that we have studied extremely closely at SHJ.

To this day intermittent fasting is a main pillar within our SHJ Nutrition System, and you’ll see that it’s also a big part of how Hugh Jackman was able to get shredded to become Wolverine.

In our original Hugh Jackman Workout Routine and Diet article we talked a lot about his nutrition, but we’ve also expanded on it in multiple other articles, including our SHJ Guide to Intermittent Fasting!

We do have an even older article that talks a bit more about Hugh Jackman and his intermittent fasting, but I personally suggest the two I linked to above over that one.

And, considering I wrote them all and do all the research here at SHJ, I think you can take my word for it!

Another big aspect of Hugh Jackman’s diet is the fact that he actually used intermittent fasting in conjunction with BULKING!

Many people think of intermittent fasting as a tool that is strictly used to cut weight (mainly because that’s generally the best usage of it considering you’re skipping a large portion of your eating window each day), but Jackman used it to keep a slow and clean bulk and reduce any fat gain during the process.

Since it will actually be such a large portion of this diet that we discuss below I do want to talk a bit more about it here so that you’re not absolutely forced to go through other articles to make use of it.

Here’s what we shared in our original Jackman article:

His Wolverine physique was powered by an eating regime called 16:8 – a form of intermittent fasting (IF) where you eat nothing for 16 hours a day, then cram all your calories into the other eight. It clearly worked for Hugh, so I resolved to follow a 16:8 diet for 10 days to find out if it could for me – and if it will work for you, too.

I actually utilize an 18:6 window, but we go from 14-18+ hour fasting inside our Academy and Nutrition System with our members depending on each individual and what specifically fits their goals and lifestyle.

I also do want to add one disclaimer about the meal plan I’ll be sharing below:

The current sourced meal plan fits everything I’ve researched about Hugh Jackman, down to all the details I even utilized in my book, the only difference is that this source had him listed at 6,000 daily calories where I almost always had Jackman stating around 4,000-5,000.

Now, you should be using specific calculators like the ones we utilize in our Nutrition System to make sure you’re adhering to what is right specifically for YOU, but I did want to bring attention to the differences that have been listed.