CLICK HERE TO GO TO THE NEW OFFICIAL SHJ GUIDE TO INTERMITTENT FASTING!

What the heck is intermittent, and why are we talking about not eating!?

I understand if that’s what you asked prior to reading this post.  I also understand if the only reason you’re reading this is because you saw “Hugh Jackmans Wolverine”.  I get it, because I would have done the same thing.  Truth is, Jackman really did use intermittent fasting when he got insanely ripped up for his role of Wolverine, and we’ll go into a bit more detail about that later in the article.

For now I think it’s important to discuss what the heck intermittent fasting is and why it can help get you Superhero Jacked!!!  Here’s a quote from wikipedia that we can analyze real quick to better come up with our own understanding.

an umbrella term for various diets that cycle between a period of fasting and non-fasting.

And, for those of you who don’t know what fasting is…it’s not eating or drinking anything of substance (particular to the diet) for a period of time.  So, once you put intermittent in front of the term it starts to put a twist on the definition of fasting, because it shows that you will be fasting in different cycles.  I also had to include the word “umbrella” in the definition just for my own sake.  Yes, it made me think of Mary Poppins.

Let’s break it down a bit more and start discussing what it can do for you, and how you can use it.  We’ll start by looking at just some of the benefits.  Here’s a list given to use by Precision Nutrition:

Let’s steal some of the things from here that we really want to focus on.  Sure, we love almost all of it, but we’re discussing the superhero jacked side effects for now.  Increased fat burning, growth hormone release and metabolic rate while also improving my appetite and blood sugar control, and cardiovascular function.  I mean, if that doesn’t all sound absolutely awesome to you, I don’t know how else to sell you on this!

I mention in the title [aside from Wolverine] both Paleo and Bulletproof.  That’s because both of these diet regimes use intermittent fasting to their advantage.  Now I’m not saying in order to be on a paleo or bulletproof diet you have to incorporate it, but it is a recommendation because of the above facts.  The normal and recommended fasting period is generally anything above 15 hours.  Anything less and your body won’t react to the fast the way you are looking for, and you may not see the same results.  That being said, bulletproof intermittent fasting recommends 18 hours as a general rule of thumb (but again, does not state that this is a must).

Let’s take a look at that 18 hour window for a second, and also look at some hacks that 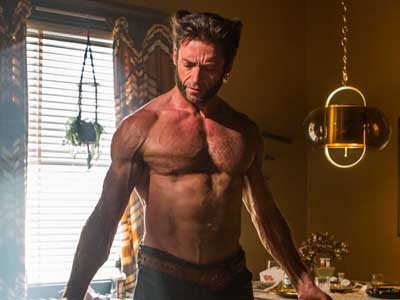 bulletproof uses to pull it off so easily.  Let’s assume you stop eating at 8 pm every night, this would mean if you wanted your 18 hour fast you would not eat until 2 pm the following day.  Not to bad, right?  But, what if you’re starving!?  Paleo and bulletproof believe in a higher fat, moderate protein, and low carb intake diet plan, which really helps your “I’m starving!!!” cause.  Fat satiates you more then any other macronutrient and also can kickstart your fat burning (crazy how that works, huh?) which allows you to use it to your advantage while fasting.

So, while you’re not allowed to have any carbs or protein to keep your fast intact, you can still have things like coffee, tea, or even some added fat to keep you satiated and promote fat burning.  Mmm, yes I said coffee.  Please refer to my SuperHuman Fuel article to start hacking your fast now!  Another great hack is a decaf vanilla latte, or cup of decaf tea before bed with some fat added (MCT or Coconut oil generally does the trick!).  Just make sure you’re indulgent doesn’t have any other additive besides the extra fat, or you’re body might not react to the fast.  [This means, make sure you’re not intaking any protein or carbs if you want to fast to have the same effect]

By now you might be thinking, “but I’m here for Wolverine…”

Alright alright, settle down people, I just wanted to show you the benefits and give you some hacks to increase performance and fat loss.  Is that okay!?  But, since you insist, we’ll talk more about Hugh Jackman and his intermittent fasting.  Here’s a quote taken from Mens Fitness and Jackman discussing his diet.

“I feel so much better on it,” he says. The diet, which allows for an eight-hour window in which to eat followed by a 16-hour, fat-burning fast, is especially useful for the actor, who’s constantly having to bulk and cut for roles. “I haven’t put on nearly the amount of fat I normally would,” he says. “And the great thing about this diet is, I sleep so much better.”

Mens Fitness and Jackman then go on to say:

To build his body for The Wolverine, he followed a brutal, no-nonsense nutrition plan prescribed to him personally by none other than Dwayne “the Rock” Johnson. “He told me that if in a six-month period you want to put on 25 pounds of lean muscle and not fat, eat natural and eat 6,000 calories a day,” Jackman says. “There were times when I would literally eat with the mind set of working out. ‘One more mouthful, one more, come on, come on, you’ve got to finish this meal.’” It’s a sacrifice for sure, but he’s used to that; for him, it’s just “part of the gig.”

I guess we’ll give him an 8 hour window considering the fact that The Rock himself is forcing him to put down 6,000 calories a day!  Talk about being committed.  If hearing about Jackman put down 6,000 calories and then seeing the pictures and watching the film of his chiseled body on the big screen doesn’t support this fast enough, I guess I lose. But, all jokes aside, intermittent fasting can have a huge impact on your diet, fat burn, sleep (which is super important in weight loss AND muscle gain), and overall health.

Does this mean I can eat like crud if I use Intermittent Fasting?

No, you’re not that lucky! I already gave you the link to the Bulletproof Coffee, which will help you with your fast, but you will also be eating according to Paleo Guidelines.  In order to find out more about Paleo, check out the beginners guide here:

If you need any further help, don’t hesitate to ask for it in the comment section below!