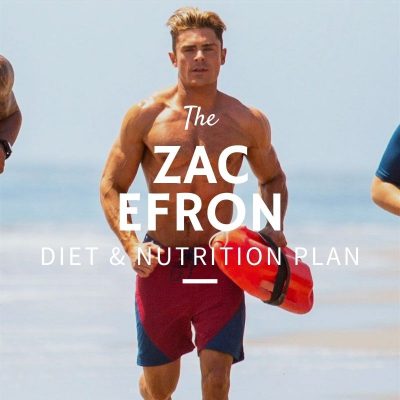 We’re back with some more Zac Efron!

The SHJ Army LOVES Zac Efron and when our original Zac Efron Workout Routine and Diet article went live he was the most popular celebrity on the entire site for a long time running!

But now this time we’re going to be hyper-focused into strictly the diet plan he used for his transformation to shredded (hence the Zac Efton Baywatch DIET PLAN title, yah know?).

In our original article we talked about how Efron utilized 9 days of keto to shred water weight and really look cut for his role, and in this one we’re going to be expanding on that a bit and using some extra resources to talk about the entire process.

In a Tweet we used from Efron in our original article he stated:

And in the image he showed his cheat day which he wrote:

Which, if we break it down a bit more, was really about water manipulation to be ready for the role: deplete the water with keto and a ton of water intake, and then pump up with a carb reload.

Of course it’s easier when you have trainers telling you exactly what to do like Efron has, but that is how it worked in simplest terms.

Jumping of to GQ they (with some help from Efron’s trainer) tell us a bit more about what led up to Efron’s water/carb manipulation:

“Efron also supplemented with whey protein” adds Murphy, who also stipulated it could contain no other ingredients. “He also hit a minimum of 100 ounces of water daily.”

From this we can tell that Murphy was immediately working with keeping Efron’s diet super clean and playing with his water intake to prepare for the carb/water manipulation end game.

GQ also continues by telling us a bit more about how he was tweaking Efron’s calorie intake as well:

Murphy didn’t disclose specifics but says he had Efron change his caloric intake about every two weeks, along with his breakdown of protein, carbs, and fat. “My tweaks worked like a charm,” he says.

Which means he was immediately getting Efron ready for tweaks like the no-carbs and water manipulation right off the bat by constantly switching his overall intake on a biweekly basis to slowly shred Efron up.

Let’s break this down with a full restriction and supplemental breakdown below.

Restriction One: All Organic/Whole Food

Complete this process for a few months before water-manipulation-shred phase.