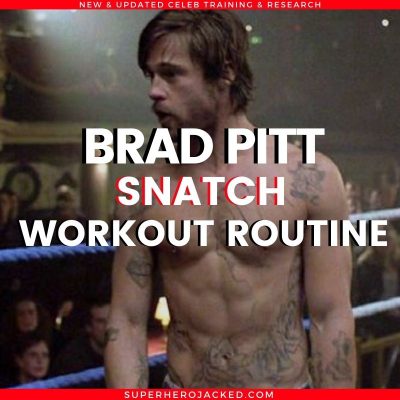 I mean, c’mon, everyone wants to know exactly how he got his physiques for roles like Troy, Fight Club and even Once Upon A Time In Hollywood!

For that reason our original Brad Pitt Workout Routine and Diet Plan article has been around for quite a while.

In this one we’re going to take some of what we learned there, but also focus in on some new information Pitt’s trainer (at the time: legendary boxing coach Joe Goossen) shared with Men’s Journal specifically about his training for the movie Snatch where he played Mickey O’Neil.

Here’s what Men’s Journal tells us about Mickey O’Neil and Pitt’s portrayl:

Onscreen as the tattooed Irish brawler, “One Punch” Mickey O’Neil, Pitt was still the epitome of lean but he gained more mass, specifically on his arms and shoulders. Between the two projects, he put on somewhere between five to 10 pounds of muscle, a fair amount given his frame.

For this one Pitt came in looking quite similar to his physique (MJ even makes mention to how they think his Snatch physique rivals his Fight Club) we saw in Fight Club, which I’m actually happy about being that our original workout was much more geared towards Achilles style aesthetic.

Immediately after seeing his training regime a few other celebs came to mind being that it is entirely geared towards boxing and training like a fighter.

Obviously we’ve seen a couple fighters workouts like Ryan Garcia’s Workout and even Conor McGregor’s Workout (and plan for much more in 2021), but we also have a bunch of celebrities who have transformed their physiques into absolutely shredded fighters like these:

To give you an idea of his training we’ll also be sharing some quotes from Goossen’s interview.

What was your initial assessment of Pitt?

I treated him like any person who walks in my door wanting to become a boxer. I asked him if he’d ever done sports or boxed in high school, and I was shocked when he said he hadn’t. The way he’s put together, he looks like someone who’s been on a playing field or in a ring before. Brad showed up to work every day of those five weeks. The sessions were at least two hours every time. I always say, don’t estimate what some of these actors do. He put himself through the grinder to get where he ended up. I really put him through his paces.

He goes on to tell us a TON about his training which we’ll break down into different pieces below.

How did the boxing instruction begin?

I didn’t have him throw any punches the first few days. And before we even got into jump rope or shadow boxing, I wanted to make sure he had the stance down right. I had him move back and forth, with his feet facing the right position, on the balls of his feet, with the heels up. The idea of footwork was probably the most challenging element of his training. But it only took about one week for him to start going in the right direction. I’ve worked with a lot of young amateurs who are coming up to become professional-level fighters. They come into the gym willing to work, but maybe have a few bad habits. I trained Brad in the same way I would train those amateur fighters, minus the heavy sparring of course.

What kind of bag work did you have him doing?

Following the first week of footwork and hand placement, I got him involved with the speed bag, which he got the hang of very quickly. We would follow that with the double-ended bag, to help with his timing. By the third week we were working the heavy bag, throwing his punches at the hanging 150 pounds. There’s nothing like getting to punch something with the heft of a man and really getting to gas out fully.

Did you have him shadowbox?

That was our finisher for most training days. The gym I work out of is filled with mirrors, so I was able to get a good look at his form and he was able to see how his own movements looked. The key to a great punch is torque. I had to see it, and I could only do that when he was unleashing. So once we got the form right, I let him go all-out—in shadowboxing and on the bags.

I did cut a couple questions, but I kept in the answers that really relate to the actual routine.

You ready to check it out?

Check out Johnny Lee Miller’s Workout to see a schedule of how often you can utilize these boxing style workouts on a weekly basis.

“Perform the drills below in standard boxing rounds: work for 3 minutes, rest for 1 minute. Start with 3 rounds per move, then build up to 5. The best way to become well-versed in these drills is to find a good boxing or MMA gym in your area, but you can also do these drills on your own with a partner.”