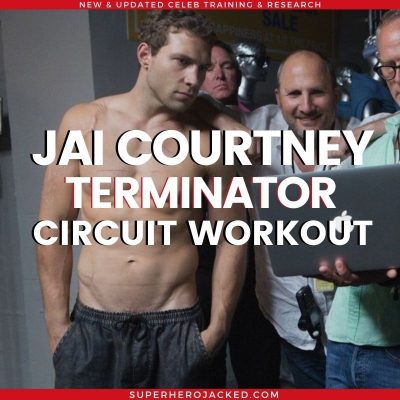 We just took a full look at Jai Courtney’s Workout and Diet, but now I wanted to come back and share a variation of his training specifically for Terminator Genisys!

You guys loved the initial research and were actually really fond of the fact that I based it around his Suicide Squad training, but being that we have this available to us it only makes sense to share it for those of you looking to step it up a notch.

In the interview we’ll be zoning in on for this one, Courtney’s trainer Aaron Williamson talks to GQ about his training and nutrition to get shredded.

I should note that Courtney stayed super lean since then while tacking on a ton of mass, and used different training styles to do so; but some members of The SHJ Army may like this style of training and this lean physique even better.

Here’s some of GQ and Williamson’s conversation about Courtney:

“Training with Jai was pretty cool. The dude is a genetic freak and I would tell him often how jealous I was,” Williamson tells GQ. “It was the first time I’d ever trained someone where we literally had to be careful not to lift too much weight.

He continues by telling a lot more, including the fact that he thinks Courtney has the best genetics he’s ever seen.

From my other research I’ve learned that Courtney is a super hard worker as well, so I suppose when tack that on it may seem like it’s genetics, but here’s what Williamson’s continues with:

“So we focused on cardio and functional training specifically to shave some of his size off and make him looked ripped,” a regimen that also included some serious changes to his diet.

“He was also doing an ultra low calorie diet too so his energy was hit or miss depending on how much sleep he was getting and how long he’d shoot for. Terminator had a gruelling film schedule so we’d train at all hours of the day and night. We’d crank the music way up & set the time for the big circuits we’d do.

“Plyo box jumps, pull ups, planks, plank push-ups, side planks with rotation, medicine ball slams, battle ropes, TRX rows. This is just an example of the one of the workouts we would do. Hands down the best genetics I’ve ever seen on anyone.”

From there Williamson and GQ put together a sample circuit workout that is similar to Courtney’s Terminator training, which I’ll be sharing a variation of below.

It’s super high volume and involves a bunch of different styles of training, but it’s a KILLER workout.

This workout is shared by GQ but courtesy of celeb trainer Aaron Williamson!