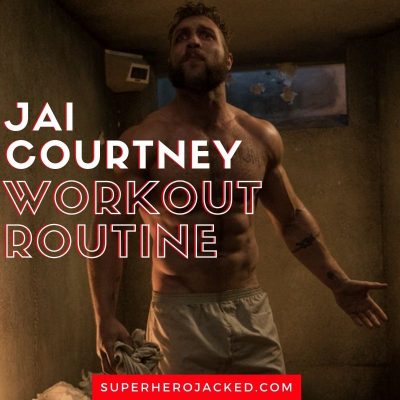 And we want to know exactly how he did it.

Courtney has shown off a fairly lean physique in roles like Spartacus, and then even came in looking pretty shredded up for his role in Terminator, but then he was READY for his shot in Suicide Squad, coming in at a completely new level of training and aesthetic.

It was similar to Henry Cavill who we have seen go from shredded for Immortals to big and massive for Man of Steel.

Basically the difference between our goals inside our Superhuman System and our Behemoth Program.

Courtney will be back for his role in The Suicide Squad this year, and I’m excited to see how he makes his appearance.

Courtney just falls in at the average height range among male celebrities.

He would have missed it had he been an inch shorter, but he does make it, with a fairly bulkier 6’1. 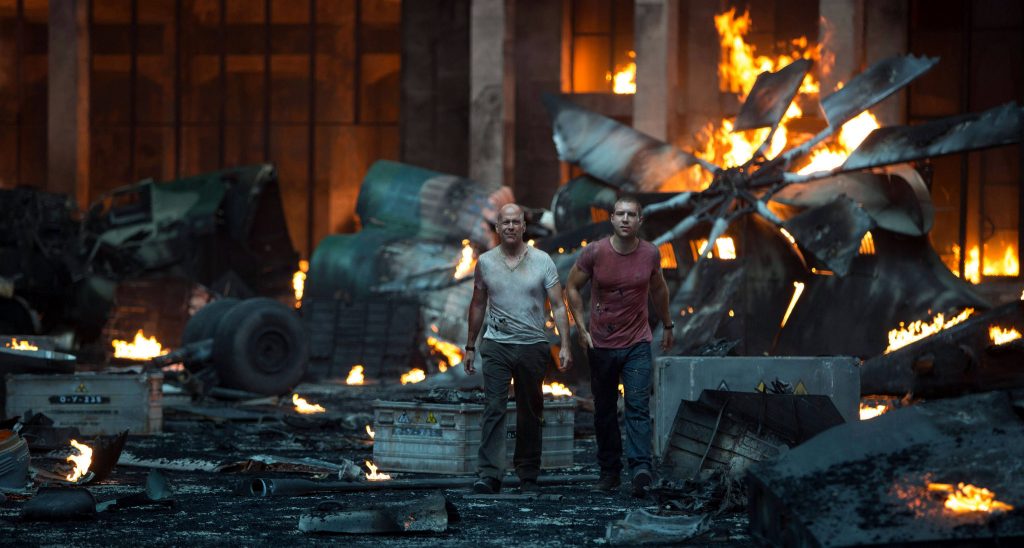 Jai Courtney believes in finding the specific training and nutrition that is suitable for YOU, which is something we can absolutely get behind.

Our Academy is quite literally built around finding the best approach for each and every individual we have joining us.

On training for his role in Spartacus he told Coach Mag UK:

Well, I knew that from the very first day of filming all I’d be wearing was a bloody loincloth! So it was the first time I had taken my training seriously, rather than a bit of fun. It really opened my eyes to the science behind training and nutrition and how you can transform your body to better portray a character on screen. It was really interesting for me to go through that process and I learned so much. But I was younger and could get away with a lot more. It’s remarkable how things do shift and you can become more prone to injury and need to treat your body a little more carefully. But it also allows you to evolve the way you do things to get the right results. You can try different ways of training and new approaches to eating to find the right way that works for you.

And they go on to ask about getting lean for Terminator: Genisys, in which he says:

I’m naturally a bigger-frame guy and it’s meant that I could always get away without doing an awful lot and still look in reasonable shape. When it came to Terminator, put simply, they told me I needed to drop a bunch of weight, about 12kg. That wasn’t something I’d ever had to focus on before. They wanted me to get away from being thick and muscle-bound and get really stripped down. So it was a totally different approach. I couldn’t lift any weights and my training was all low-impact cardio and a more restricted dietary regime than anything I’d ever done before. Honestly, it was pretty mind-bending.

He goes on to talk a lot about his training, but we’ll save that for our next section.

Courtney is also big into eating real food.  He trains at an extremely high volume and opts for the healthy, REAL option whenever he’s able.

“I would much rather have a couple of hundred grams of chicken in the afternoon than neck a shake,” says Courtney. “You’re better off just keeping your diet relatively lean and eating simply.”

His trainer also told GQ about his approach to dropping a ton of weight for Terminator, stating:

“He was also doing an ultra low calorie diet too so his energy was hit or miss depending on how much sleep he was getting and how long he’d shoot for. Terminator had a grueling film schedule so we’d train at all hours of the day and night. We’d crank the music way up & set the time for the big circuits we’d do.”

So keep in mind they did switch it up, but specifically for different goals (as we recommend doing as well; goals and lifestyle changes)! 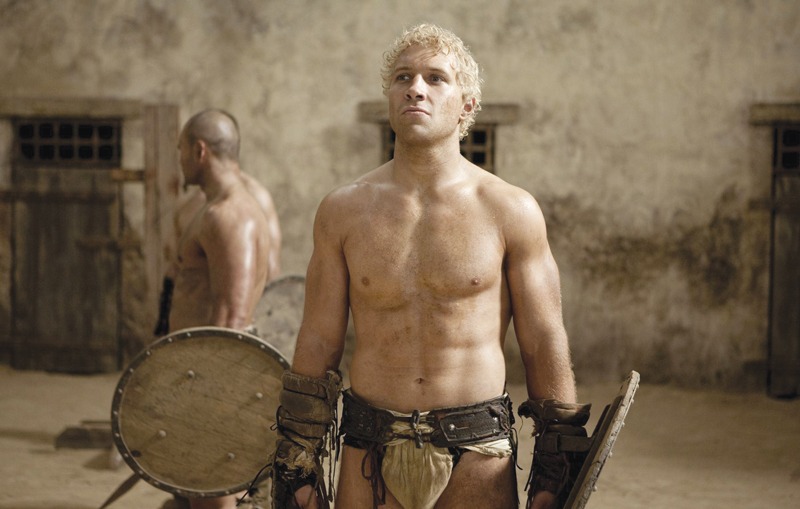 While it may seem like that was a ton of information about his diet and nutrition, we have a lot more to build off of for his training!

Courtney has gone through a couple of phases, always being fairly lean, and recently bulking up for his role in Suicide Squad!

For example, we may be starting backwards, but here’s how Courtney tells Coach Mag he trained for Suicide Squad:

The beauty of this movie was that I was told I could finally gain some weight! So I went from about 190lb [86kg] in Terminator to 230lb [105kg] for Suicide Squad. So for me the physical preparation was massive. We’d all train together. We did martial arts training together from the very beginning. Will Smith and I would roll on the mats doing jiu jitsu, I was lifting weights with Joel Kinnaman, and Jay Hernandez and I got the gloves on every day and we’d spar. There was a great group mentality. It was really cool. Yeah, it could get a little hot sometimes… but it was always cool, man, because he’s your brother. It’s great when there’s expectation across the board and everyone works together to reach physical goals. You use each other for some camaraderie and healthy competition to push each other.

They continued by asking him whether it was better training in a group or on his own, to which he responded saying:

Yeah. It’s competitive, not in that you’re looking sideways and thinking, “He’s doing better than me” but in a way that spurs you on positively to keep pushing. You want everyone to be doing their best. If you can lift with a buddy so he can spot you and push you harder so you hit bigger numbers, then that’s really cool, man. It keeps you fired. Team spirit, a sense of camaraderie, it’s a beautiful thing and as someone who played a lot of team sports growing up, I loved it. One of the best things about training is that you can do it alone, but you can also do it with your mates, teach each other to be better and have a lot of fun in the process.

But that’s not all we have.

There’s much more to build on.

Muscle Madness shares us this from some of Courney’s training style:

Efficiency in Courtney’s sessions is a must. His regular workout ends in 30min. This bodyweight training wastes no time but gives maximum results. “After you’ve finished, you’re gassed,” he says. “You’ve used every single muscle in your body. It’s much more effective than sitting lifting weights and looking in the mirror.”

That is the entire concept behind our Superhuman System, which has been build off research of hundreds and hundreds of celebrities.

Courtney also believes in keeping up with your activity level.

“If you get just a bit of exercise in before every meal, you’ll really see a difference,” says Courtney. “Perform 50 press-ups, sit-ups or prisoner squats, broken up into as many sets as you need before eating. It will force your body to access fat stores for fuel.”

On top of this GQ shares a TON of information about his training.

We saw a bit about how they would train hours and crank it up a notch within his dietary research, but they also share some more about it.

“Plyo box jumps, pull ups, planks, plank push-ups, side planks with rotation, medicine ball slams, battle ropes, TRX rows. This is just an example of the one of the workouts we would do. Hands down the best genetics I’ve ever seen on anyone.”

BUT, we’ll actually be building this one around his Suicide Squad training and then get a second article on the training him and his trainer share regarding Terminator: Genisys shredding!

So get ready to get BIG like Courtney as Boomerang!

For Jai Courtney’s Suicide Squad training he bulked up and tacked on nearly 40 lbs of mass after having cut down to 190 for Terminator.  We’re going to be doing 5 days of weightlifting, starting each session with some jiu jitsu that can be subbed with a cardio warm up and finishing with some sparring.

Courtney mentions how important it is to continue increasing the load overtime. What he’s talking about is progressive overload which is extremely important, and likely pyramid training.  For this we’ll be using traditional pyramid training and straight sets (which you can learn more about here), and also make sure to build up your lifts over time (increasing the weight week to week).

Tuesday: Back and Traps, Jiu Jitsu and Sparring

Jai Courtney Workout: Back and Traps, Jiu Jitsu and Sparring