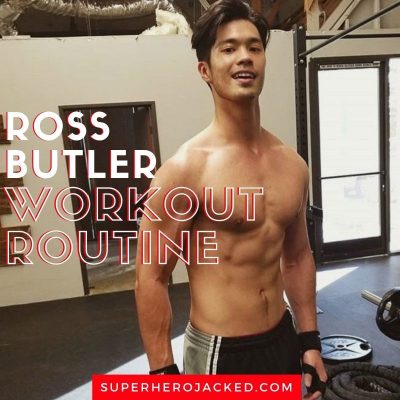 You may know Ross Butler from All The Boys, 13 Reasons Why or Riverdale, but I know him from Shazam!

Okay, I knew him from Riverdale and 13 Reasons Why first, BUT, he also played a super fun role in Shazam!

He recently did a video for Men’s Health which shared a pretty awesome chest and back workout for us, so we’re going to be giving it a shot.

“I’m splitting my muscle groups up into two a day. Today is a chest and back day.”

This means he’s doing splits like biceps and triceps, shoulders and legs, or other variants of two muscle groups per day that we’d normally see programmed together.

This is actually the first time we’ve had Butler hit the site, but he’s definitely not new in terms of CW Stars, or even Riverdale Stars.

Oh, and of course we have Zachary Levi’s Workout and Diet (AKA Shazam!)

Butler was nice enough to take us all through a workout routine for the Men’s Health video, and the way he described his splits make it seem like he’s doing a lot of training to fatigue at a pretty high volume and likely training 3-4 times a week with his double body part splits, and then potentially adding on some extra training on top of that.

He’s definitely looking pretty good, so I’m excited to give it a show; especially because I love any routines that program some failure and blowouts into them!

This workout is shared by Men’s Health, and Ross Butler!

Half-Full Pull Up (Half Range then Full Range = 1 rep)