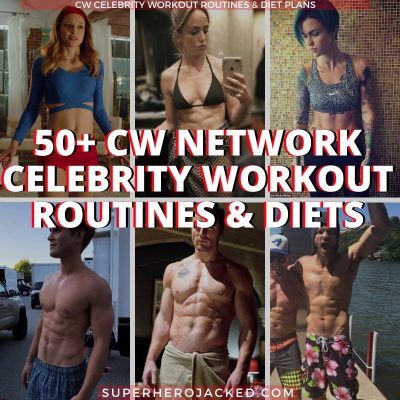 We have had A LOT of CW Stars turn up on SHJ.

Actually, I bet there’s more CW Stars hidden in our Workout Database than I’m even aware of.

The CW has had tons and tons of amazing shows that create literal superheroes, and also physiques that The SHJ Army envies in many ways.

These shows range from Arrow, Flash, Supergirl and The Arrowverse all the way to Riverdale, Vampire Diaries, Supernatural, and tons of shows that are no longer airing.

For that reason, I felt it would be awesome to make a compilation of all the different shows and celebrities we’ve seen from the network.

So basically what I’m trying to tell you is that this one will be a large compilation of any and all celebrity workouts who have starred in a CW Network Series.

I will be doing my best to find ALL of those celebrities, but part of my knows that a handful will naturally be outside of my search and in that instance I will add them if you comment below.

The best way to help me out would be scouring our Workout Database, which is now the most comprehensive on the internet, and then if you see someone I missed just let me know and I’ll add them!

For the sake of this being SUPERHERO Jacked, I will use that as an excuse to start off by going through the celebrities who have appeared in our Arrowverse.

Let’s start with the first series, which will include a mini-list of celebrities.

I’m going to immediately preface this with the fact that I know many celebrities may have first appeared on Arrow and then moved over to a different show (similar to Caity Lotz and Brandon Routh, who we will see towards the top in a different category).

For that reason I will simply be using my discretion as to where I believe they should fall, in what order, and even sometimes more than one list.

That being said, we have a lot of awesome routines from our first series: Arrow!

And, that’ll likely be our longest list from ONE series.

How awesome is that?

You can literally just pick up and begin training like nearly a dozen different Arrow stars.

I’m thinking we’ll need to see Colton Haynes, John Barrowman and maybe a couple others soon to put this list over a dozen, right?

Next up on the list is going to be a compilation of the rest of our Arrowverse celebrities.

To start I want to list our main superheroes, and then we’ll make our way into other main characters that we’ve seen from each show.

And, before you say it, I know damn well there are tons of other heroes I could have added.

I also purposely selected Caity Lotz’s White Canary because she is the leader.

I promise I’ll be naming tons of other celebrities from the shows in just a moment.

But first let’s take a second to acknowledge how freakin’ awesome that list is.

Okay, ready? Here’s the rest of our Arrowverse…

Alright, so maybe I could have just put them all together so the second portion wasn’t so anticlimactic , BUT, it still seems easier for those looking to jump in and read some quick listicle breakdowns.

I blame it on the fact that Arrow hogged all our workouts!

The next section of the list will be compiled with even smaller lists.

So, see, there was a reason for the anticlimactic lists being shown above.

We’re above to break it down, depending on how many celebrities we have from each, by shows within the network.

And, considering it’s the most popular among The SHJ Army, we’ll be starting with Riverdale!

Okay, so apparently we’ve seen A LOT of Riverdale celebs on SHJ.

It doesn’t beat out Arrow, but it definitely puts the rest of the Arrowverse to shame individually, so we’ll have to see about stepping those up a notch…or two.

Next on the list is going to be a mix of some of the more recent shows that we’ve seen at the network, regardless of if that means brand new, or even cancelled within the last five or so years.

Again, I’ll be using my best judgement as to who I should include for you guys most prominently.

It also felt very fitting putting Lucy Hale and Cody Christian directly after each other considering they also have starred as brother and sister in Pretty Little Liars.

We also have the finale which is made up of celebrities from all the shows that ended prior to the one’s already listed (I think the newest we’ll cover on the next list is from 2015).

I won’t be listing them in chronological order and will again be going based on the celebrity or just my own judgement on who you guys would like to see first.

Some of these you may have had no idea were from The CW!

No wonder every time another pops up I’m like “And another CW celeb to add to the list that I can no longer remember”!

That last dozen had at the end there put us at a total of FORTY SIX CW Star Workout Routines.

I’ve mentioned a few times that I want to write a bit more coming soon, so now it’ll be a mission to hit that fifty mark.

So don’t forget to check back.