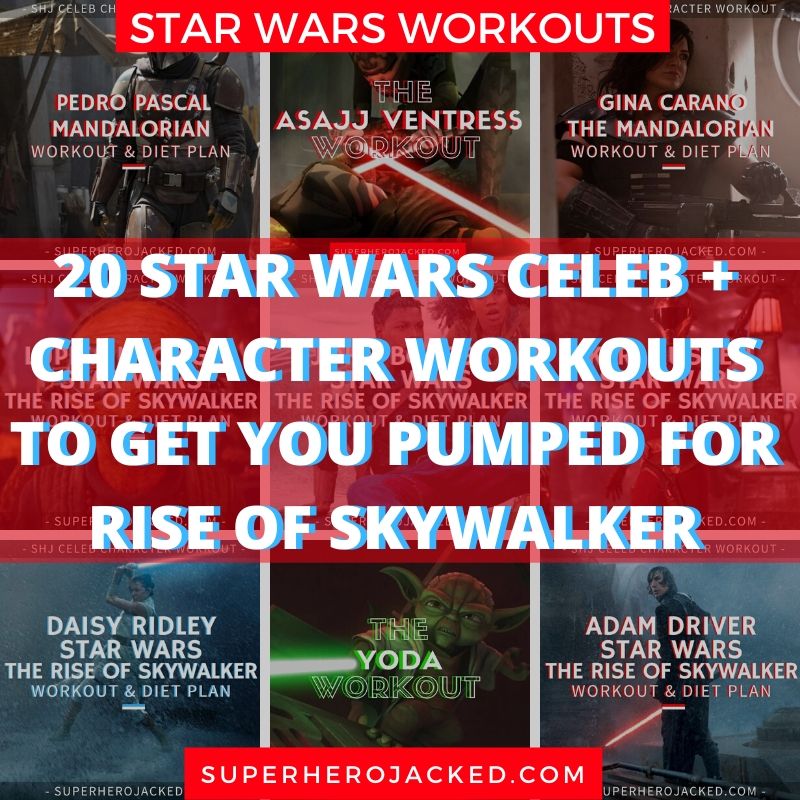 Star Wars: Rise of Skywalker comes out this weekend.

Well, at least at the time of me initially writing this article.

I suppose sharing 20 Star Wars Workouts will stay pretty relevant regardless of if a movie is coming out or not; especially with the consideration that these celebs and characters that I’m going to be sharing are from a wide range of different Star Wars movies and shows.

Oh, and in case you’re wondering (or maybe my future self is wondering and I can come back to this one day): I have tickets for 6:40 tonight.

Before we go any further, though, I do want to remind you that we currently have a Star Wars: Rise of The Superhuman SHJ Tee available, as well as an exclusive offer on our Star Wars Themed Workout Packet (download every routine in one packet) on that tee.

Among other SHJ Nerdy Fitness tees, of course.

Being that we have a large handful of workouts to share, I am going to do my best to break them down into smaller categories instead of going through each one of these characters one-by-one; especially because some of them have only appeared in smaller roles.

Section One: The Rise of Skywalker

Where better to start than what we’re getting ready for?

The Rise of Skywalker.

We’ll start with a full list of actors, big and small parts included, that have been in our final trilogy of The Skywalker Saga!

We’ll start with the big three:

But don’t worry, we have A LOT more where that comes from.

We also have tons of celebs that play smaller roles directly from this main trilogy as well:

Let’s take a moment of silence for those characters who are no longer with us.

Okay, ready for the next section?

We’re eight routines in, and still have a dozen more to crush!

We don’t have as many links to share for the next few sections, but there’s is still plenty of awesome workouts.

Some of the most important, some would say, as well.

If you’re looking to train in the ways of the Jedi (or not), you should definitely start by checking out some of these character inspired workout routines:

I suppose I could have almost called this one a Clone Wars section, but I felt it didn’t do all the characters justice.

You know what I’m saying.

And there’s more where these come from.

Section Three: The Mandalorian, Rogue One, Solo, and more Padme

Next on the list we have another nine workouts.

This time from a handful of different Star Wars movies, and even our newest Disney+ Show.

Okay, you might not agree with my selection of “the biggest”, but give me a break.

It wasn’t easy, and I’m still going to give you the rest of the amazing lineup of workouts we have on the site.

BONUS: I will be adding new Star Wars Celeb and Character Workouts as they are added to the site! 🙂

And therefore I have a confession.

I won’t even tell you wish celebrity I forgot to add to my initial count, but I’m just going to go ahead and blame it on our search function if that’s okay with you!

But there you have it.

No spoilers, just good ol’ fashion workout routines to get you going before and after.