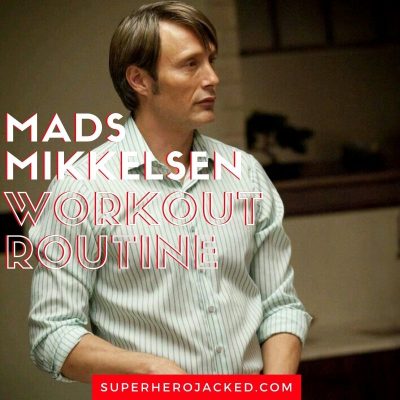 Mads Mikkelsen’s workout wasn’t exactly requested, BUT, it’s a must have for me.

We recently had our Star Wars Workout round-up and Mads will now be added to the list as Galen Erso from Rogue One.

On top of that, Mikkelsen is also our villain in Doctor Strange, Kaecilius, and also Hannibal Lector in the TV show Hannibal (just to name two more incredible roles).

I’ve actually had quite a few members of The SHJ Army ask for MORE villains to be added to our Superhero Workout Database (mainly for characters).

That being said, it does seem like Mikkelsen can take a break from playing the villain, as he did in his most recent role in Artic.

Mikkelsen is actually below the average height we’ve seen among male celebrities here at SHJ.

He literally misses that range by just an inch; but still not quite there. 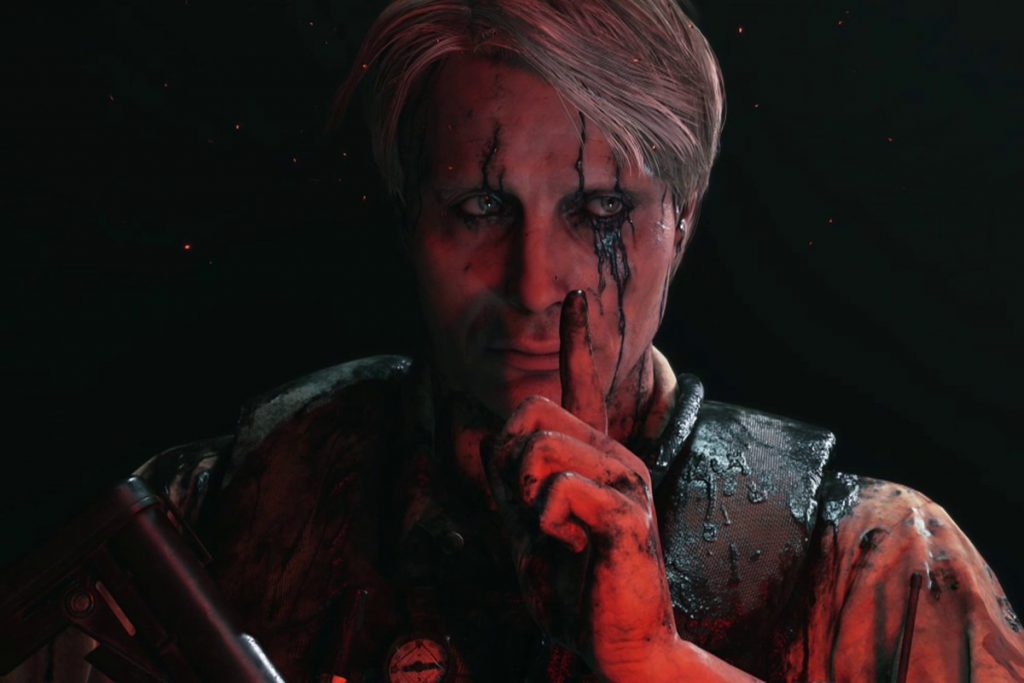 He tells The Global Town Hall about his high metabolism and burgers in an interview with Gabrielle:

Gabrielle Reilly:  How about your diet?  Do you have a good diet?

Mads Mikkelsen:  Because my metabolism is so high I have never worried about my diet.  I have been able to eat hamburgers and fries when I was younger but now I try and eat healthier not to keep weight off, but for healthier living.

Knowing that, I suppose it’s okay to share some of Mikkelsen’s go-to eats outside of hamburgers and fries.

And no, he doesn’t eat like he would if he was a real life Hannibal.

TV Over Mind tells us a couple interesting things about his eating style:

Mads Mikkelsen loves eating his native Danish food and he has many personal favorites. However, in an interview with Shortlist, he admitted that he is not very good at cooking Danish food. Instead, he prefers to cook Asian food. Mikkelsen loves throwing ingredients into the wok and likes to add extra chili. One of the dishes he believes he cooks the best is coconut shrimp soup. In fact, he has bragged that no restaurant version of the dish is as good as his own. Therefore, he must have excellent skills in the kitchen.

He Prefers Beers to Spirits

When it comes to his favorite tipple, Mikkelsen is strictly a beer man, says The Humor Nation. He has said that spirits are not his thing and he really doesn’t like Scotch and Whiskey. Mikkelsen says that he has tried them, but they remind of the smell of a girl who has just put perfume on instead of taking a shower.

There you have it: beer, and Asian food! 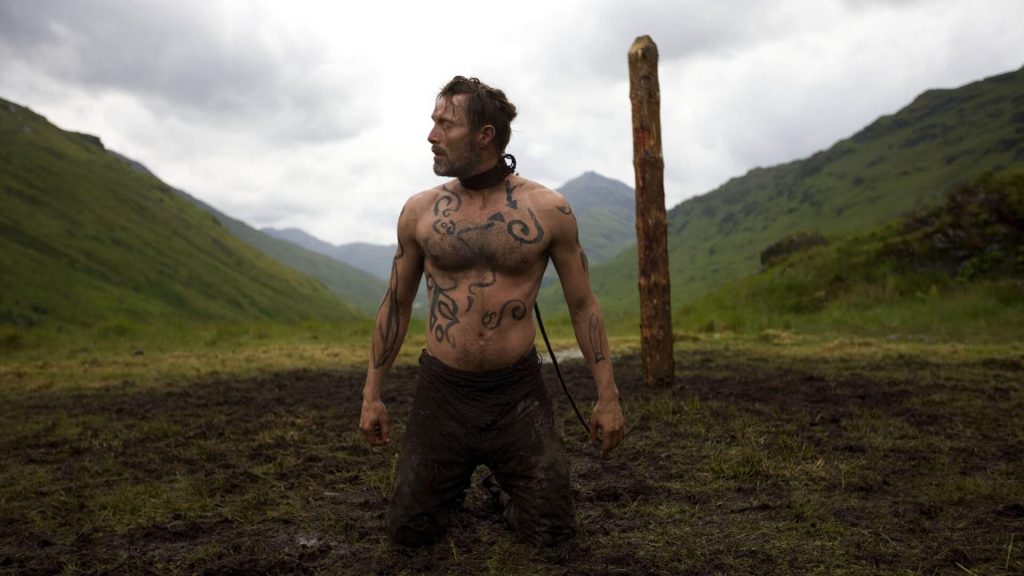 Mads Mikkelsen’s workout is pretty similar to his diet.

And I mean that in the sense that he doesn’t really have one.

Here’s what he tells Gabrielle:

Gabrielle Reilly:  What fitness routine do you follow to stay in such great shape?

Mads Mikkelsen:  I don’t actually follow a fitness routine; it depends on what I am doing.  I have an extremely high metabolism.  I can never gain weight for a movie. Skinny I can do, overweight is impossible for me.  When I have time off, like now, I bike for three hours through the week, play tennis etc, things I enjoy.  I am not one of those people who workout in a gym.  I want to love what I do.

So Mikkelsen has an issue with weight gain, but has never had an issue keeping it off.

Tack that on top of the fact that he doesn’t prefer to hit the gym, and we’re cutting the weights and moving to what seems to be strictly cardio with some mild calisthenics.

I hope you have a bike handy.

If you really want to step up your training, you’re going to have to do it in a Hannibal Lecter fashion for this one.

And by that I mean your brain.  Because Mikkelsen is extremely intelligent, speaks five different languages, and works out his cognitive function more than he trains his physique!

That being said, I will still give you some other resources for the site when we build this workout that will help you stay active like Mikkelsen.

I will also be building this routine around helping you get the Mikkelsen physique using both his style, and some calisthenic work as well (it would be silly to build you a gym-based routine when he clearly states he doesn’t go).

But, for the most part it will revolve around doing the things you love while staying active.

Mikkelsen says when he has time off he bikes for 3 hours a week, plays tennis, and does the things he loves.  So we’ll be getting active using some of our resources 3 days per week and I’ll also be having you tack on some calisthenics as well.

The calisthenics portion of this workout is optional considering it’s not what Mikkelsen would seem to prefer, but it is being programmed specifically to get you into the toned and slim physique that he often shows off.

Complete designated rep count with as many sets as it takes.

Feel free to split up the movements one after another, or complete each in total before moving onto the next.

Mikkelsen’s go-to activity is biking and tennis; but he does mention the fact that he simply likes to do the things he loves.

For that reason you can also opt for this when it comes to getting active.

Of course, if you’re not going to you should probably just hit some cardio, but for now we’ll list some other activities you can choose:

If this doesn’t seem like it’s going so well, you can opt for traditional cardio for 60 minutes:

On your days off, to attempt to replicate Mikkelsen’s high metabolism, I suggest staying active and burning some extra calories.

For that reason I suggest either biking, running, hiking, or at the very least tracking your steps.

For you step trackers out there, this is what we’re going to be looking for:

10k Steps for the day 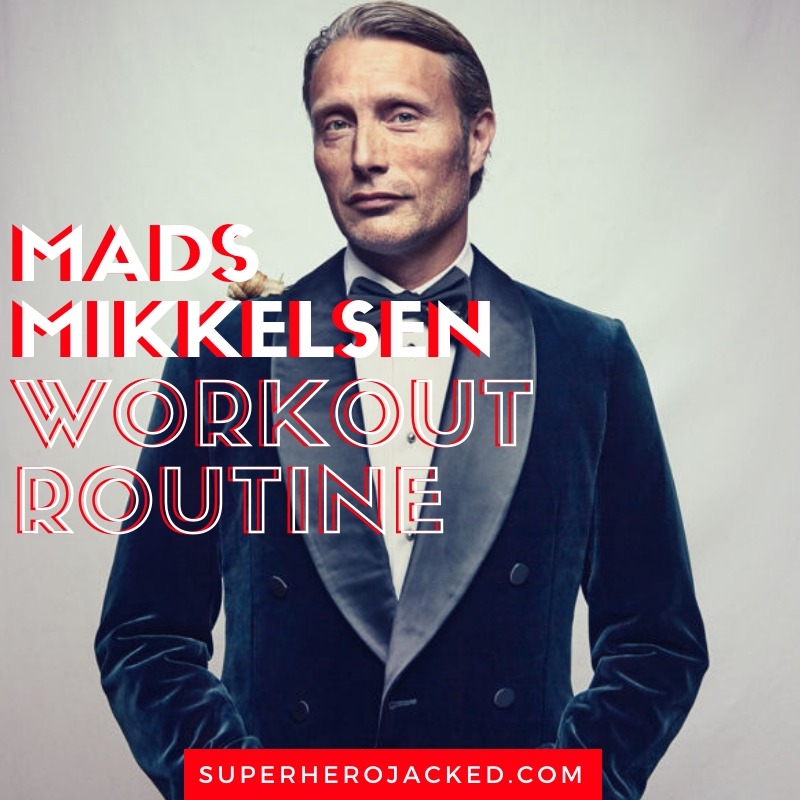