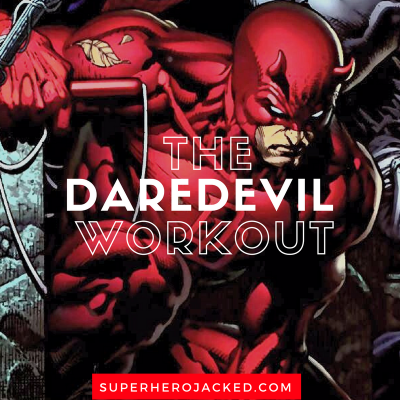 You’re in for a treat today.

One of Coach Derek’s favorite superheroes.

He completely stepped it up a notch for this one. And it’s kind of starting to make me believe he might actually be Daredevil in real life….

But, this one is going to take our superhero / comic / character training to a whole new level – so I hope you’re ready!

Coach Derek has even written reasonings behind his decision making in forming the program, so while you’re going through you’ll have snippets of awesomeness from the coach himself (or possible Daredevil).

Spider-Man and Green Arrow share the shortest spot among the heroes we’ve seen thus far at 5’11 – and Daredevil joins the crew!  Just above them are Aquaman and Punisher standing only an inch or so taller.

We’ve had Superman at 6’3, and both Captain America and Batman at 6’2, with Thor towering over them at 6’6 and Cyborg right there with him.

And, of course, Hulk is up there with Thor and Cyborg, and sometimes even portrayed much taller. 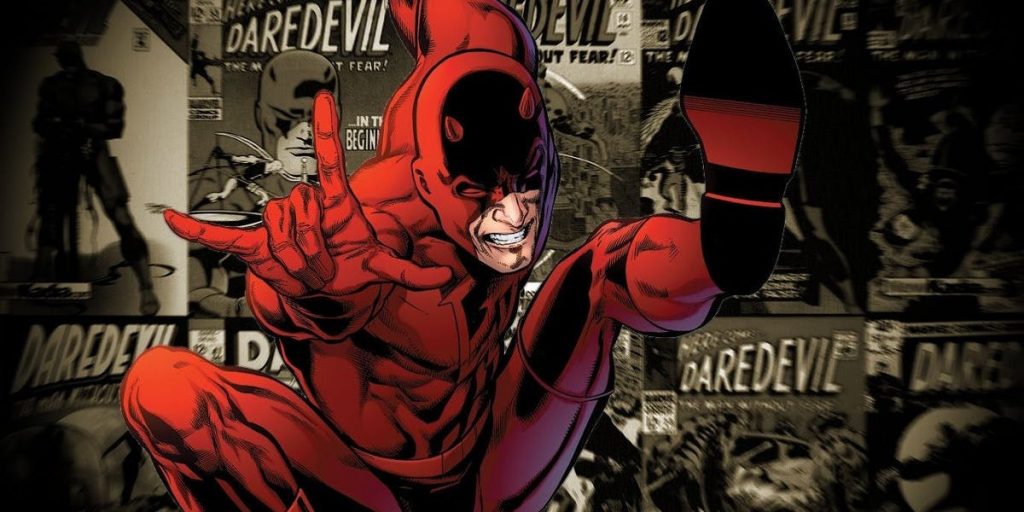 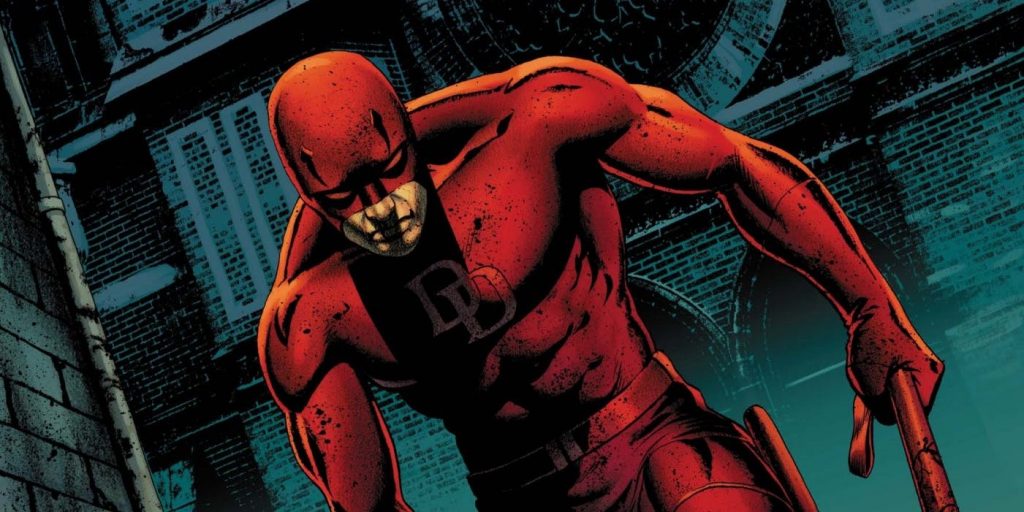 I’d usually say this is the fun part, but I’m actually pretty nervous to live up to Coach Derek’s awesomeness.

But, I’ll keep it short and sweet because he did all the hard stuff in his routine anyway!

And by that I mean he gave background information to make the specifics of the workout fun and sensical.

So let’s go ahead and start with the abilities and powers right off the bat (or club):

Taking that up a notch, the Daredevil Wiki page writes out the explanation like this:

Although the character is blind, his remaining four senses function with superhuman accuracy and sensitivity, giving him abilities far beyond the limits of a sighted person. Few characters know that the hero cannot see. Daredevil developed a radar sense, which is similar to echolocation.

And Marvel’s Daredevil page continues this with:

Daredevil possesses the strength, speed, agility, and endurance, not to mention acrobatic and gymnastic skills, of an Olympic-level athlete. Through a combination of the tutelage of Stick and self-training, Daredevil is a master of a unique martial art form, which is a hybridized form of American boxing and the Japanese arts of ninjutsu, judo and aiki-jujutsu. Martial arts training has given him an immense degree of concentration and personal control over his body and energy, or Ki.

Which is just a snippet of his ability section.

And the power section goes on for a full page!  So, that might be something you’ll want to check out in more depth.

But here’s a piece:

In compensation for his lost sight, Daredevil’s other four senses have been preternaturally enhanced.His sense of touch is sensitive enough to detect the faint impressions of ink on paper, allowing him to read by touch. He is also able to feel minute changes in temperature and pressure, enough to sense a human body at a distance of five feet, due to body heat and air disturbance.

Let’s get on with this routine, though….shall we!?

Daredevil can meditate and recover from injuries and therefore brutal training as well.  If you want to train like this hero, you’re going to have to step it up a notch.

Coach Derek has written out exact details and explanations for each part of your routine so read through carefully and have fun with it!

Matt and his father were both  boxers, while its impossible and dangerous  to box blindfolded, and you are most certainly guaranteed to get injured hitting a heavy bag blindfolded, let’s focus on defensive maneuvers to  give you that  Daredevil like “Radar Sense” to avoid blows

Like the Super Soldier Serum, it does not exist. Use the one that fits your situation and  feels the most natural in that moment. If you have to think about it too much, its not natural. Evade your opponent’s punches any way that you can and be sure to counter immediately  Different techniques will work against different opponent’s styles. Great Fighters are forever adapting their offense to get around opponents defense, so keep changing up your defensive game  to keep up

Hold a medicine ball over your head . put your Right knee forward and your Left knee on the ground, brace your core and explosively slam the ball against the wall, catch the ball, switch legs and repeat

When deploying  club don’t flail, Keep club up by shoulder (hands  in a boxing stance )  keep club close  to body

Without winding up ,Strike down ,at an angle Using rotation of shoulder and power from the hips   immediately bringing the  club back to starting position at shoulder after impacting  not following through the swing .

Main targets should be shoulder, elbow, ribs and knees Do not strike at head as it could potentially be lethal

What is  needed to fight are the ability to See, Think and Breathe

Both partners start either blindfolded or eyes closed  start from their knees. using touch , sticking control and sensitivity  work to get your opponent into a dominant top position (Mount, or cross body/Side Control)

If partner A gets top position , keep your chin & weight down and try to keep / maintain top position. Partner B on bottom should bridge hips, try to trap top person’s limbs and use shrimping to get partner A into guard position or escape.

Muscle Endurance is a key element in fighting. On this day, use little to no rest  to fatigue muscle groups

Shadowboxing using light weights : (Builds shoulder endurance as  gravity works downwards , use your Delts to help keep punches straight  ,  stay in place and hone your punches or move around to add footwork

For round 1: do two circuits of all stamina exercises

Round 2: Do three circuits of all stamina exercises

Round 3: Do Four circuits of all stamina exercises

If you plan on emulating Daredevil’s swinging/ climbing you will need to work grip training and resistance.

Rope Climbs ( if unable to do , tie rope to a secure area and play tug of war for 30 seconds

Tie a resistance band to a pole, tree or post grab an end with both hands with your back facing the post

Remove resistance band,  wrap around  your back, grab dumbbells

you should be holding Dumbbell & end of resistance band

20 Standing rotating bicep curl ,(at top rotate palms out, go back down repeat ,)

Ricochets for 7 minutes ( find a medium sized square or rectangle shape, jump all around feet together ,various directions  inside of square  , side to side back & forth , trace the square etc )

Find a playground or someplace safe to attempt

Squat to explosive pull up:  Get into a squat stance (knees bent) under a pull up bar, swing set or whatever is being used to execute a  pull up, Explosively jump up and catch bar, do one pull up and let go  dropping into squat stance  10 reps

Balance on 1 leg , as long as you can hold, repeat on other side

Monkey Plant -go to a wall or obstacle around waist level or higher, , place both palms on surface and lift yourself using your legs  to fully stand on obstacle – 10  reps

Jump to soft landing, jump off box, allotted steps or other knee high  items, try to land as softly and quietly as possible – 5 to 7 reps I HATE SPAM! Don't worry, your email is safe with me.