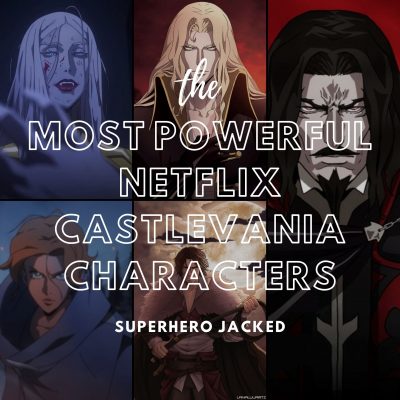 Let’s take some time today to talk about the sheer power of some of these characters in Netflix’s Castlevania. Power in this series isn’t your usual run of the mill power levels. We’re talking about legendary beasts and the men and women brave enough to associate with them, whether friend or foe.

BUT, before I get into the popularity of these characters, I want to mention that Castlevania is a part of our ever growing Workout Database.

We are continuing to work here at SHJ on getting a mini-database together for you guys, as well as a placement quiz to help you find your ideal workout from the Castlevania roster!

Feel free to check out our Anime Workout Database in the meantime.

For this one I scoured the internet for help and almost every single listicle has a different take on who the most powerful Castlevania characters are. So what I decided to do was compile ALL of them together and then took the average of all the compiled ratings and placed them in their slot accordingly. Additional characters who did not make it in the top ten that I want to mention as well can be seen in the runner-up section.

Starting off our list of the most powerful Castlevania characters is someone who loves hammer-time: Hector!

Hector is not simply a Forgemaster…

And is often found likening himself to a wizard…

No guys I’m being completely serious…

Utilizing enchanted pebbles or fenced posts and a powerful talisman, Hector is able to erect a massive force field that is capable of trapping his targets within as well as protecting from without. He is also a fairly capable Forgemaster, able to bring life back into the dead and create what are known as Night Creatures. His particular style of devil forging looks like a master blacksmith as he bangs the souls of hell into the dead.

Crashing in at number nine of the most powerful Castlevania character is the Cyclops!

At first glance, the Cyclops of Castlevania appears to be your typical giant, one-eyed beast. However, one particular power of note is much more akin to that of Medusa. Using its sheer gaze, it is capable of turning enemies to stone. Even more terrifying though is the massive beam it is capable of firing from its eye and sweeping the area before it.

Yeah this cyclops isn’t all about his size…

At number eight among the most powerful Castlevania characters of all time is the last entity you see in life: Death!

I know, I know, how the hell is Death incarnate only number eight here…

Death hits like a damn truck, despite literally being nothing but skin and bones. He possesses immense superhuman strength and can swing his scythe clean through solid objects like they were butter. Death also possesses shapeshifting, which he uses quite deftly to hide amongst Dracula’s court. While not typically being able to manipulate the world directly, he is a master manipulator who more or less sets the entire stage of the Castlevania series.

Coming in at number seven of our most powerful Castlevania characters of all time is the wizard killer: Isaac!

Where Hector may be a skilled magician, Isaac is what magic-wielders should fear. His dagger is capable of tearing through magic defenses as well as burn with such heat that he sets the undead ablaze on strike. Don’t be fooled however, it is not just his dagger that’s terrifying, for humans themselves must fear the combat ability of Isaac. His ability to forge is also something to be feared, as he is capable of forging a Night Creature from his targets at the very moment they are given death.

Number six of our most powerful Castlevania characters of all time is the lovely Lenore!

Lenore is more or less the diplomat of the Styrian sisters. While she by no means is weak, she does not typically deal in matters with her claws and inhuman strength. She is a master manipulator who uses her expertly crafted sweet and kind demeanor to get what she wants from her targets. If their is anyone in the series who shows the truth behind a vampire’s glamour, it is this woman right here. However, let me repeat that she is still a vampire, and if you are unfortunate to feel her wrath, you will be deftly reminded of this fact.

Coming in at number five of our most powerful Castlevania characters of all time is the queen of pain: Carmilla!

Carmila is without a doubt the ring leader of the Styrian sisters. She at first seems to be more like her sister Lenore, where she acts much more diplomatic and only shows her fangs when angered. However, as the series goes on, her plans begin to unfold and she is seen to have an almost endless mass of power. She is on the conquest of world domination and she certainly has the means to do it. Towards the end of her life is when her true power is revealed as far as raw physical prowess. She has the typical strength and agility of a powerful vampire, while also being able to teleport around an area with superhuman speed. She is also an expert swordswoman, which only adds to her overall combat capabilities. She is by far the most terrifying of the sisters when she is met in battle.

At number four among the most powerful Castlevania characters of all time we have the killer of Death: Trevor Belmont!

Trevor is a drunkard with a real knack at killing stuff. He truly deserves to be called the main protagonist of this series as he puts in some serious work. Trevor is typically seen wielding a powerful whip which causes massive explosions within the undead. Any weapon in the hands of this man is dangerous though. I swear if someone decided to face Trevor during dinner, he would end them swiftly with a butter knife before sitting back down to his meal.

If that butter knife happens to be blessed, I feel sorry for that monster…

Coming into the top three of the most powerful Castlevania characters of all time we have the very magical Sypha Belnades!

This entry I can write in few words. This woman literally throws MASSIVE ice spikes at enemies, and that’s just the surface. She is immensely adept at elemental magic and is probably one of the most entertaining combatants to watch fight. She can be a human hurricane one minute, and then turn around and become a storm with immense electrical storms emitting from her fingertips. Vampires beware as she can vaporize them with the flick of a finger.

Coming in at number two among the most powerful Castlevania characters of all time is part vampire himself: Alucard!

Basically imagine if Trevor Belmont was a more serious man that also happened to have the powers of a vampire coursing through his veins. Alucard is an absolute animal out on the battlefield, wielding both physical combat skill and magic. To start off talking about Alucard’s power, he is capable of teleporting to his targets in the blink of an eye. Now, if he doesn’t have time to bother with being up close with his enemy, he can just send his sword hurdling at his enemies and impale them at will. He also possesses the typical physiological enhancements of a vampire, which only adds to this mans monster killing capabilities.

Coming in at number one of the most powerful Castlevania characters of all time is the viciously insane Dracula!

I mean come on now are you surprised by this ranking…

This is damn Dracula we are talking about here. This man is a legend across so many pieces of lore in the world. He is the king of vampires, and it shows when he decides to do some killing. Dracula in Castlevania is an absolute powerhouse who is shown right off the bat, pun intended, to be able to manifest himself as a massive flaming torrent just to go and send a personal message. He is a shadow incarnate, having the ability to travel large distances in the blink of an eye and teleport his entire castle at will. Dracula is so immensely powerful, he can even laugh in the face of normal vampire weaknesses, taking silver blades into himself like they’re sewing needles.

The Most Powerful Netflix Castlevania Characters of All Time (Runner Ups):