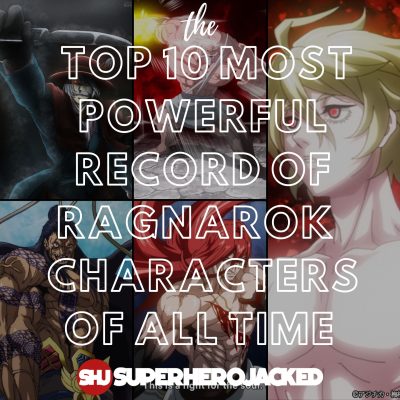 The Most Powerful Record of Ragnarok Characters is a list of the Top 10 strongest characters in the anime and in the manga!

The characters on the top ten deserve their slot, but the power levels are just so close together, and there are just SO MANY powerful characters that even our runner-up section at the bottom of this article was hard to finalize.

Record of Ragnarok is a kind of Battle Royale anime. It’s an anime about the fight for the fate of humanity – whether it be their extinction or their continued existence. The gods (every pantheon of them from Greek, Indian, Norse, Chinese, Japanese – you get the idea) fight against the strongest humans from all of history (the humans are resurrected for this one purpose of fighting for the continued survival of the human race) to determine whether humanity will continue to live or be wiped from the face of the earth.

We have our Anime Workouts Database featuring characters from a handful of the most popular shows – and we also have Workout Placement Quizzes to help SHJ Army members find the best workout for them.

For this one, I scoured the internet for help and almost every single listicle has a different take on who The Most Powerful Record of Ragnarok Characters are so what I decided to do was compile ALL of them together and place each character in the slot they averaged most as well as keeping the list to base TEN most powerful and then increasing the length of the normal runner-up slots I normally do in no specific order.

MOST POWERFUL RECORD OF RAGNAROK CHARACTERS

Starting off our list of The Most Powerful Record of Ragnarok Characters is the Most Famous Serial Killer of All Time – Jack the Ripper!

Jack terrorized London’s streets and society by carving out a reputation for being a brutal and savage murderer. He didn’t just kill people, he enjoyed seeing the fear in their eyes and considered it beautiful. His main weapons of choice are knives, with which he can cut, main, or throw them with deadly accuracy and lethal skill.

Jack the Ripper at SHJ:

Coming in at number nine on the list of the most powerful Record of Ragnarok Characters is the demi-god and Greek Hero, Hercules!

Everyone who’s anyone has heard at least one version of Hercules, whether the Disney version or the short-lived TV series starring Calvin Sabo. Hercules is a demi-god who was tasked with 12 Labors by the Olympians in order to redeem himself. He has incredible strength and can fuse his club with his different skills such as Nemean Lion and Cretan Bull. As a god, he can’t be hurt by conventional weapons and has semi-immortality thanks to drinking ambrosia.

At number eight among the most powerful Record of Ragnarok characters is the Chief of the Hindu Pantheon, Shiva!

Shiva is the god of destruction and death in the Hindu religion. Thanks to his four arms, he can simultaneously defend and attack any opponent and because of his godhood, he can’t be hurt by conventional means. It is only thanks to the fusing of Valkyrie and Hero through Volundr that his opponents can wound him. Shiva can use his arms to attack multiple opponents, and being a god, each punch he deli

Next up among our most powerful Record of Ragnarok characters is the famous Chinese General Lu Bu!

Lu Bu was a famous warlord during China’s 3 Kingdom Era and was known as “The Flying General” because he seemed to fly while riding his horse, the “Red Hare”. Lu Bu is the first to fight for humanity and is pitted against Thor, the Norse God of Thunder. During his lifetime, Lu Bu trained and sought to become the Greatest Warrior of All Time – a feat he succeeded in as he defeated every army and opponent he came up against. His most powerful move, Sky Eater, is powerful enough to split the clouds in the sky in half.

Just missing the top five and coming in at number six among the most powerful Record of Ragnarok characters is the Greek God of the Sea, and the god considered to be the most fearsome in the Greek Pantheon – Poseideon!

Poseidon is known as the most fearsome god because he seems to hold himself superior to others and actually has the strength to back up his attitude! He slaughtered his brother, Adonis when the latter tried to unite the other gods and overthrow Zeus. As the ruler of the seven seas, Poseidon can unleash devastating water attacks and his use of his trident is unmatched. However, despite his formidable skill, this didn’t stop Kojiro Sasaki from defeating him.

Making it to the top five among the most powerful Record of Ragnarok characters is the samurai dubbed as “History’s Greatest Loser” – Kojiro Sasaki!

Kojiro is a swordsman who has the ability to predict any attack his opponent makes by fighting that opponent in his mind. In the span of a few seconds, Kojiro is able to simulate the results of his attacks against his opponent and thereby figure the best strategy to defeat them in actual combat. He spent his life training and fighting stronger opponents than him so that he could continue to hone his skill and “defeat” his opponents in his mind.

At number four among the most powerful Record of Ragnarok characters is the God of War himself, Ares!

Ares has yet to fight in the anime but in the manga, he went up against Hercules and almost defeated him until Zeus intervened. The fact that Hercules is also an incredibly strong god makes this feat even more amazing. During the anime, Ares could perceive the smallest changes in Zeus’ fighting style and attacks that other gods could not. Also, being the God of War, he is well-versed in all kinds of combat and weaponry.

Coming in and making the top three among the most powerful Record of Ragnarok characters is the Norse God of Thunder, Thor himself!

Thor is the first combatant on the side of the gods in Ragnarok, and is pit against the Greatest Warrior of All Time, Lu Bu! While initially seemingly evenly matched, Thor’s godly brute strength prevailed in the end against the mighty Chinese general. His final attack, Geirrod Thors Hammer, countered Lu Bu’s Sky Eater, shattered the general’s bones and in turn, secured Thor’s victory over Lu Bu.

Coming in at number two among the most powerful Record of Ragnarok characters is the Father of the Gods, the Lightning God, Zeus!

Zeus appears to be a kindly and cantankerous old man, but when in the heat of battle, he reveals that his appearance is merely a facade of his true power. His strength is made manifest in his ultimate form, Adamas, and his attacks become even stronger than they already are as his hits are full of the energy of all his compressed muscles.

Coming in at number one among the most powerful Record of Ragnarok characters is the First of Man, the Father of Humanity, Adam!

Adam was the first of humanity and he possesses a unique skill that rivals all the gods – Divine Imitation! With this skill, Adam is able to replicate any godly attack he sees and can perfectly execute it and use it against his attacker. He uses this skill to pummel Zeus with his own attacks while simultaneously dodging the god’s moves. What makes him so powerful is that he has the entirety of humankind behind his back, and he shows them that the gods aren’t infallible and that humanity can win against them if they only have the will to fight with all their might.

Would you place Adam at number one or does Zeus give him a run for his money?

The Most Powerful Record of Ragnarok Characters of All Time (Runner Ups):