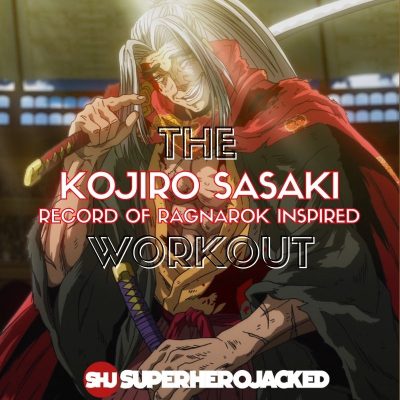 Coming in as our eighth character among our Record Of Ragnarok Inspired Workouts is actually our third round rep, Kojiro Sasaki.

He was almost one of our first characters to hit the site, directly after Adam, but you guys saw Adam and had a flood of other requests come in until now Kojiro can finally get his spot.

We’ve seen a lot of swordsman here at SHJ, especially with anime like Demon Slayer being so popular.

But, Kojiro is actually based on being “History’s Greatest Swordsman”, so we have our work cut out for us here.

ROR will be getting a Workout Placement Quiz pretty soon (if you’re reading this later on it might already have one), but for now Kojiro will be on our base quizzes.

Kojiro’s height and weight aren’t listed, but he is described as a “tall” muscular old man, and stands on par with the god Poseidon.

We can assume he’s above average height if we compare him to male anime characters, putting him about 6′ tall – potentially much higher. To learn more about Kojiro Sasaki I’ll be pulling right from his Wiki Fandom page, starting with this information they share as his bio:

Kojiro Sasaki is Humanity’s representative in the third round of Ragnarok, going against Poseidon. Kojiro is a famed swordsman hailing from feudal Japan, being referred to as “History’s Strongest Loser” and later “Humanity’s Strongest Swordsman“.

We’ve seen quite a few representatives here at SHJ thus far, and I like going in and out of two competitors that have gone against each other.

For example, we recently had Shiva and Raiden; Hercules and Jack; Adam and Zeus; and more entering the arena that can all be found within our Record Of Ragnarok Inspired Workout Database.

This is also hinting at the fact that I want to bring in Poseidon next, so here’s a later spoiler alert as he could be coming in next week.

If we move down into his powers and abilities we can start by learning about his overall abilities here:

Overall Abilities: Kojiro possesses incredible innate talent in the sword, eventually becoming the greatest swordsman in existence, surpassing even Poseidon in combat. He also has an innate talent of evolving and improving whenever he loses, which was the main factor which allowed him to surpass the likes of the Gods with his mortal body.

And when we move into his physical abilities we can break down each one like this:

Godly Strength: Kojiro possesses immense physical strength, matching that of Poseidon as shown when he could block and parry a majority of his trident attacks with the strength he channeled into his blade, even slicing his divine trident in two. One of his techniques: Tsubame Gaeshi, takes advantage of his phenomenal strength and experience, allowing him to stop the descent of a falling blade and swing it back up at speeds exceeding 200km/h (124mph), a feat considered nigh-impossible in accordance with the laws of inertia. While on Earth, Kojiro was able to cause an enormous slash in a wall, possibly by only using a wooden sword.

Godly Speed & Reflexes: Kojiro can move at speeds matching the likes of Gods, as shown in his fight against Poseidon where he could keep up with his countless afterimages and blinding speeds, even managing to overwhelming him. With the help of his innate ability, Senju Musō, Kojiro can predict his opponents movements with extreme accuracy, allowing him to evade attacks even faster. During his time on Earth, Kojiro was shown to be capable of killing a bird in mid-flight.

Godlike Endurance & Stamina: Kojiro possesses immense stamina, being able to keep up with Poseidon during their fight despite having to dodge countless attacks moving at blinding speeds. He also seems to be capable of training for long periods of time, presumably from sundown until sunrise.

The only other thing we have to [obviously] factor into this one is Kojiro’s overall swordsmanship.

They break that down separately by stating:

Swordsmanship: Kojiro possesses a godly swordsmanship prowess, even at a young age, he possessed innate talent in swordsmanship (though some people claimed otherwise) as he was able to block the opening strike of Kagekatsu Toda without prior training. Throughout his lifetime, Kojiro has fought a myriad of prominent and legendary swordsman in feudal Japan, surpassing all of them one after another. During Ragnarok, Kojiro displayed his swordsmanship skill when he unsheathed his sword, which calmed the raging tides in an instant, a feat that Musashi Miyamoto remarked as a form of enlightenment. Even after his death, all of the opponents he’s fought in the span of his lifetime (and later the entirety of Humanity), all acknowledge him as the most powerful swordsman in existence in his fight.

We won’t necessarily be working around swordsman training, but I will be including movements that are on par with strengthening the muscles needed to be adequate and improve if you were to be a swordsman.

So the main goals of this workout are:

Nothing we aren’t used to having to build a routine around.

Be ready for heavy weights to build the muscle and speed, and then extra work to also replicate the swordsman endurance.

For this one we’re going to be training with an Upper/Lower Body Split and also include endurance work each day, but then have a full day devoted to longer stamina training as well as a History’s Greatest Swordsman Circuit Test you can add in for fun weekly, biweekly or monthly that will tie it all together and let you put your skills to the test.