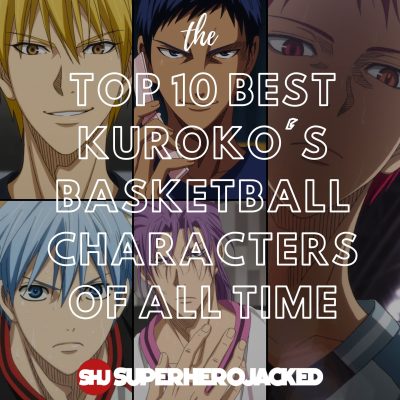 The Best Kuroko’s Basketball Characters is a list of the best basketball players on the anime Kuroko’s Basketball! When deciding on who to include in this list, I considered their overall skills, agility, blocking capacity, and adaptability on the court.

We don’t have so many sports anime lists on the website, so I felt that we should fix that and try to add a bit of sporty flavor to our workout listicles. This might even open up a ton of sports-related workouts if it becomes popular.

BUT, before I rant about the ball skills of these characters throughout the show TOO much (might have already done that), I do want to point out that Kuroko’s Basketball is one of the most popular shows in its genre. Its 3rd season is currently ranked 106th in MyAnimeList from votes cast by a little over a million viewers.

We have several anime listed in our larger Anime Workouts Database as we’ve now been able to do for a handful of the most popular shows – and we also even just recently got our Anime Inspired Workout Placement Quiz to help SHJ Army members find the best workout for them.

For this one, I scoured the internet for help and almost every single listicle has a different take on who The Best Kuroko’s Basketball Characters were so what I decided to do was compile ALL of them together and place each character in the slot they averaged most as well as keeping the list to base TEN best or most skilled and then increasing the length of the normal runner-up slots I normally do in no specific order.

Starting off our list of The Best Kuroko’s Basketball Characters of All Time we have Seirin’s Captain and Center – Teppei Kiyoshi!

Teppei is one of the Uncrowned Kings and has the second-largest hands in the league, second only to Jason Silver. His tall frame and his large hands allow him to play both roles of Center and Point Guard exceptionally well. He is able to control the ball with just one hand and can redirect the ball at a moment’s notice, allowing for his teammates to get the ball and make an unexpected shot.

Coming in at number nine on the list of the best Kuroko’s Basketball Characters is the main protagonist himself, Tetsuya Kuroko!

As a very small basketball player compared to others (he’s only 5’6), he excels at misdirection and performing unbelievable steals and passes during matches. Because of his stature, he is able to travel quickly within the blind spots of other players and can steal the ball and pass it along to his available teammates. Besides being ‘invisible’ to his opponents, Tetsuya has developed his Phantom Shot, which allows him to score against taller players thanks to the speed and trajectory of this move.

At number eight among the best Kuroko’s Basketball characters is the Shooting Guard for Yosen – Tatsuya Himuro! Himuro is famous for creating “perfect fakes” or pretending to do one move before changing direction and doing another entirely different move than before. He has mastered this to the point that even Kagami and Aomine fall for his fakes, allowing him to score easily.

Next up among our best Kuroko’s Basketball characters is the Small Forward of Fukuda Sogo – Shogo Haizaki! Shogo’s special ability, Pillage, allows him to mimic and modify the moves of his opponents, essentially allowing him to disrupt his opponents’ rhythm on the basketball court.

Just missing the top five and coming in at number six among the best Kuroko’s Basketball characters is the Shooting Guard and 3-point shot specialist of Shutoku High – Shintaro Midorima!

As previously mentioned, Shintaro specializes in doing 3-point shots and has honed his skill to the point he can shoot accurately from anywhere on the court. Thanks to his constant training, he is able to shoot from the other end of the court. Not only is this impressive, but it unnerves the opposing team seeing the power of the shot. He has also developed a special shot called the Sky Direct 3-Point in which he jumps in the air without a ball, accepts a pass from his teammate, and immediately shoots it into the basket while in the air.

Making it to the top five among the best Kuroko’s Basketball characters is the Center for Yosen High and former Generation of Miracles Center – Atsushi Murasakibara!

Atsushi is a fantastic all-around player, but he excels in defense. He completely dominates the inside of the 3-point zone and can easily block any person within that area. Aside from that, Atsushi has incredible dunking ability thanks to his height (6’10) and is able to perform a 2-handed twisting dunk.

At number four among the best Kuroko’s Basketball characters is Kuroko’s friend and teammate – Taiga Kagami! Kagami is called “The Miracle who didn’t become one of the Miracles”. He is a powerful all-around player, able to do both offense and defense, and can also steal and dunk the ball.  Kagami has excellent reflexes on the court and is able to adjust his tactics depending on his opponent. Thanks to his training with Alexandra, he has developed his Meteor Jam, a one-handed skill shot that goes right through the hoop and past the defenders’ blocks.

Coming in and making the top three among the best Kuroko’s Basketball characters is the former Small Forward of the Generation of Miracles and the current Small Forward at Kaijo High – Ryota Kise!

Kise has the ability to copy any player’s movements perfectly thanks to his exceptional visual comprehension skill. This allows him to copy how another player dunks the ball, passes the ball, and drives the ball. His Perfect Copy ability makes him a formidable opponent and one of the best players in the series, well-deserving of being in the Top 3.

Coming in at number two among the best Kuroko’s Basketball characters is Kuroko’s former partner in Teiko High-  Daiki Aomine!

Daiki is currently the Ace and Power Forward for Too Academy and is the rival of Kagami. He is a fantastic player and can score from anywhere on the basketball field thanks to his background in street basketball. His speed is second to none and his signature move, formless shot, allows him to shoot from any position.

Coming in at number one among the best Kuroko’s Basketball characters is the Point Guard and Captain of Rakuzan High – Seijuro Akashi!

Seijuro was the captain of the Generation of Miracles before he transferred to Rakuzan High. Unlike other players, Seijuro has two special abilities – Emperor Eye and Perfect Rhythmed Plays. Emperor Eye allows him to observe all his opponent’s movements thereby being able to predict his next move. Perfect Rhythmed Plays allows Seijuro to make perfect passes to his teammates, making him the ideal Playmaker.

The Best Kuroko’s Basketball Players of All Time (Runner Ups):