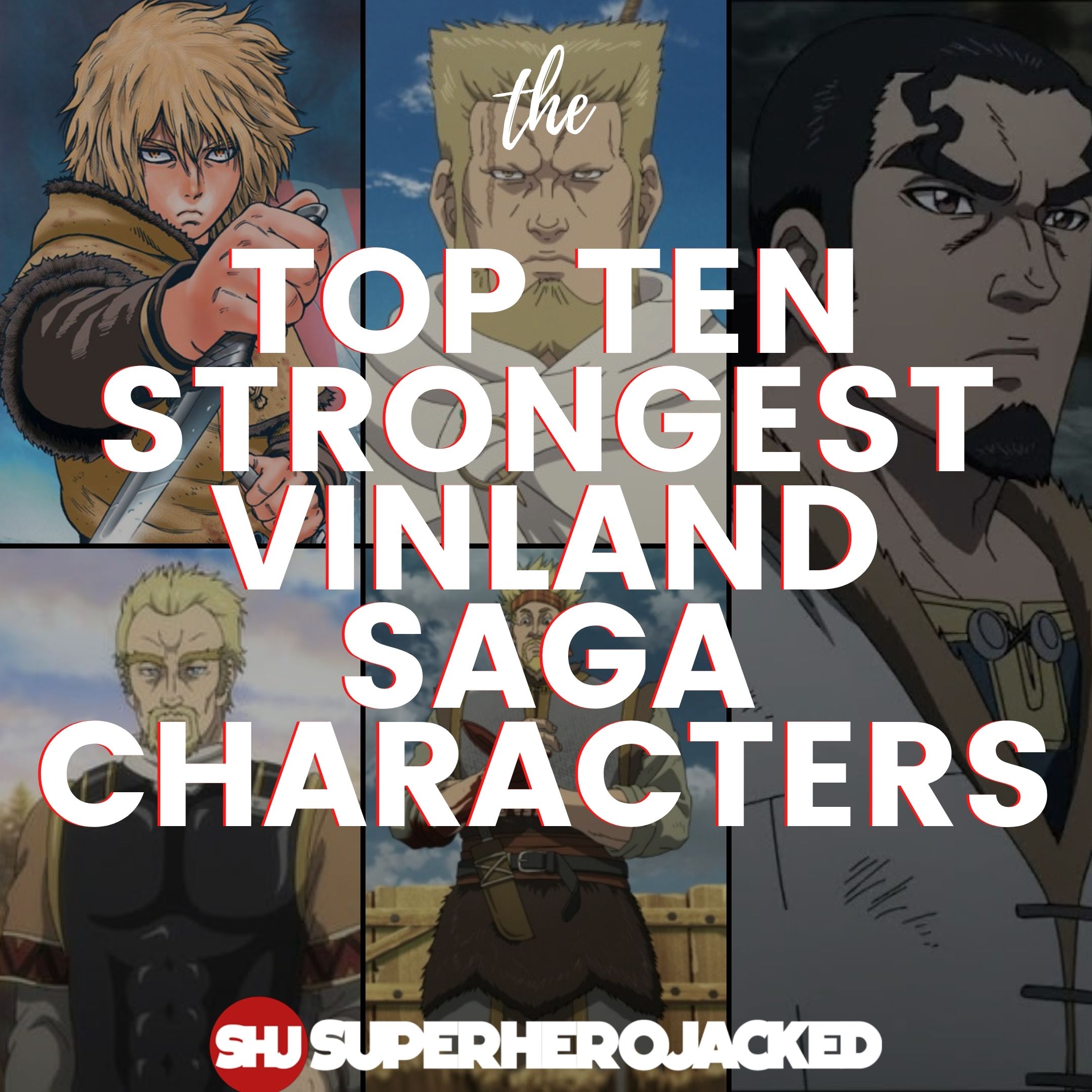 For this one we're going to be breaking down the top ten strongest Vinland Saga characters of all time!

It's about time we add our Vinland Saga characters to the growing listicles we have breaking down the most powerful and popular characters.

BUT, the reason it took longer than expected is because I was waiting to get some of our characters added to our Anime Inspired Workouts - starting with our Thors Inspired workout!

Don't worry though, I'm sure this isn't going to be the last of them. We'll continue adding our strongest Vinland Saga characters to our workouts based on your requests. 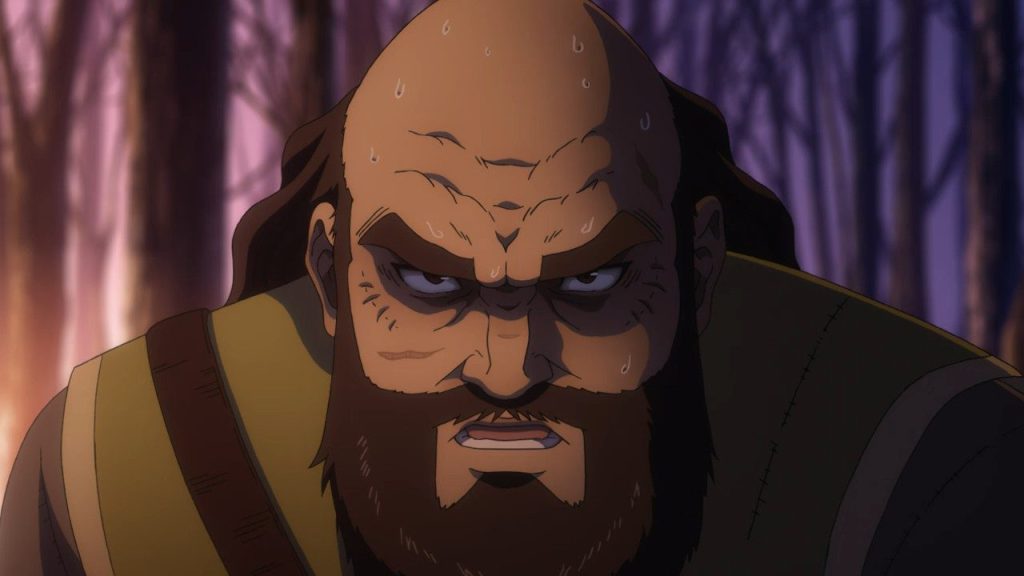 The first among our list of the strongest Vinland Saga characters is Ragnar!

Ragnar is Prince Canute's guardian, idol and chief retainer. Although having his flaws, Ragnar generally aims for good.

He treats Canute as his son, which Ragnar states this shortly before his death, and he is the only one to know of Canute's hobbies.

Outside of being Prince Canute's guardian, trainer and confidante, though - Rangar is also an extremely strong character within the series. 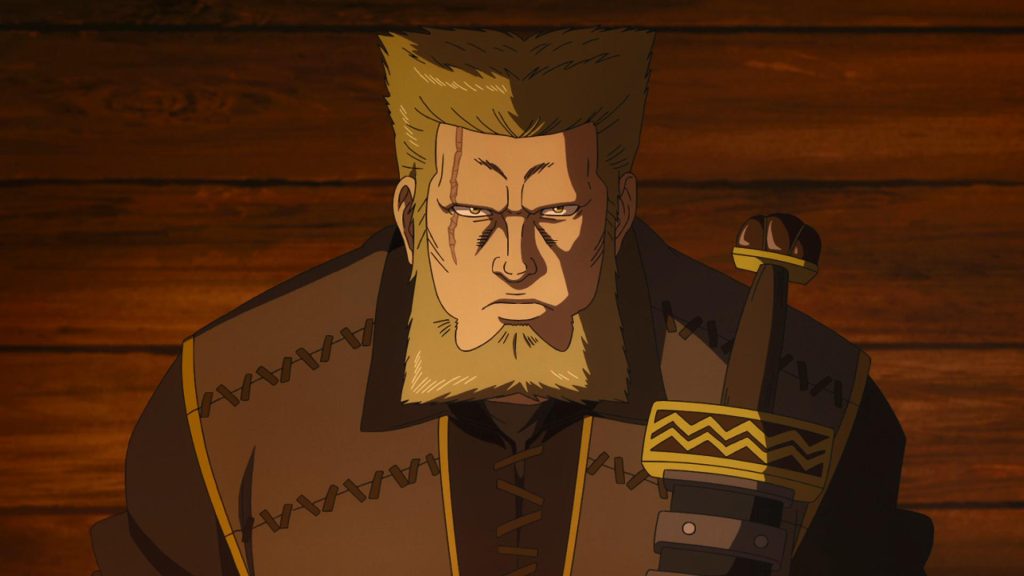 Coming in at number nine among our strongest Vinland Saga characters is Floki.

Floki is a Jomsviking commander and was one of the principal Viking commanders under Sweyn during the invasion of England and subsequently under Canute.

Here's what his Wiki Fandom tells us about his abilities: "Floki was only shown briefly in combat when he crossed swords with Askeladd after the latter's assassination of King Sweyn. However as only exceptional members of the Jomsvikings are made commanders, his combat abilities are presumably formidable."

Next up among our most powerful Vinland Saga characters is Snake at number eight.

His Wiki Fandom does not tell us much about his strength and skills, but it does tell us this: "Snake has strength greater than Askeladd and speed nearly matching Thorfinn."

Which technically does tell us loads about his overall power level if we really think about it. 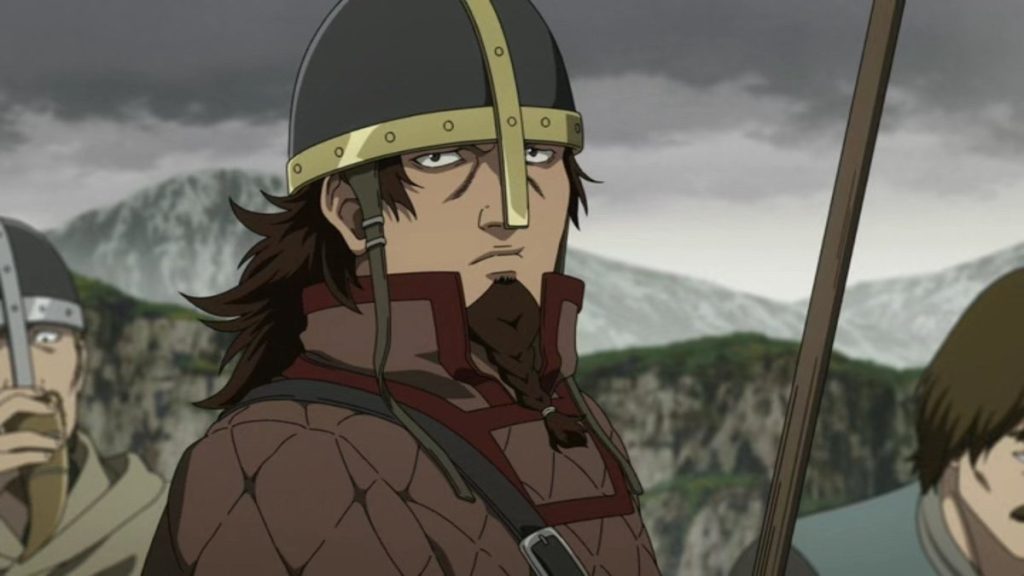 Next up among our strongest Vinland Saga characters, at number eight, is Bjorn!

His Wiki Fandom page actually tells us more than any other character prior, giving us a full and fun breakdown.

Here's what they have to say: "Berserker: Bjorn was a skilled warrior and fought with a sword and shield. His full power was displayed when he used the berserker mushroom. When in this state, he displayed tremendous ferocity, strength, and resistance to pain, becoming a highly dangerous opponent capable of continuing to battle even despite multiple injuries. The downside was that Bjorn could not distinguish between friend and foe in this state, making him potentially lethal even to his allies. Despite this, he was defeated by Thors in hand to hand combat, not managing to land a hit on the former. Years later while defending Canute, he single-handedly defeated 10 of his former companions, despite sustaining several injuries and starting out unarmed. However, after being snapped out of his berserker state by Canute, he was surprised by Atli, who was able to stab him deeply in the guts."

Most lists place Ymir anywhere from five to seven, but other lists forgot about him entirely, so I thought it was only fair to acknowledge him at the six slot.

I'm curious what you guys think!

Starting our top five strongest Vinland Saga characters is Garm, which leads us into a very solid top five.

Garm is a sociopath who always is ready to fight to the death. He is actually pretty similar to Thorkell due to their similar love for violence and battle.

He thinks of assassination as a  game and despises the idea of a peaceful and monotonous life. He is intrigued by Thorfinn as he has recognized his combat prowess and has acknowledged him as a worthy opponent. 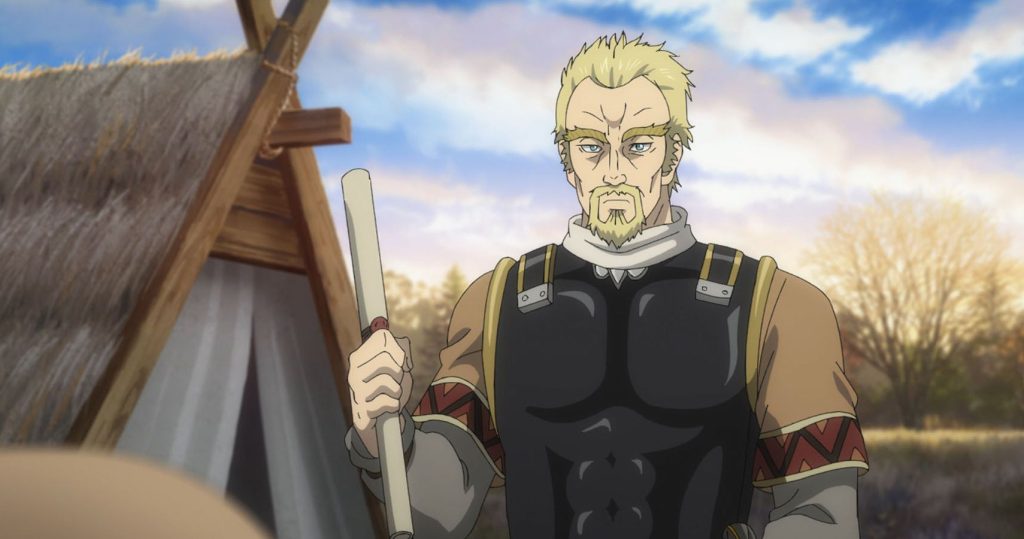 Next up, at number four among our strongest Vinland Saga characters, is Askeladd.

Most lists had Askeladd between three and five, some of which had him above our number three slot, but it seemed like a fair place to put him.

He was a cunning strategist who led a band of mercenary Vikings who looted and plundered villages for gold. He used deception to give his enemies a false sense of overconfidence. He then took advantage of them and crushed them mercilessly and ruthlessly. 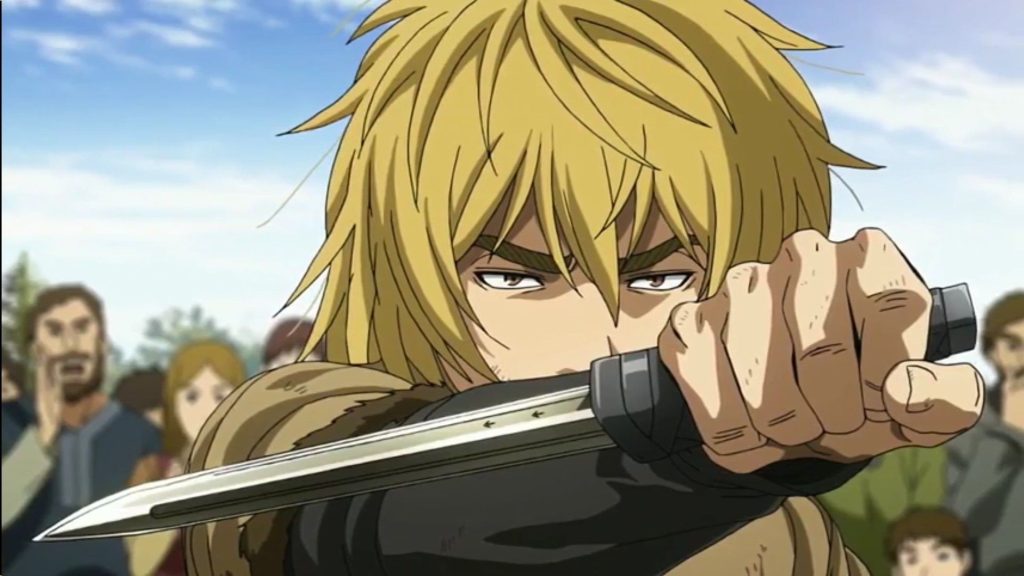 Thorfinn was often placed behind Askeladd in some lists, due to failing to defeat him, but actually proceeds to deserve his slot at number three in my opinion.

As for a warrior, Thorfinn is very skilled as he combined speed and his dual blades to attack the weak points of his opponents, thereby making him a deadly opponent. 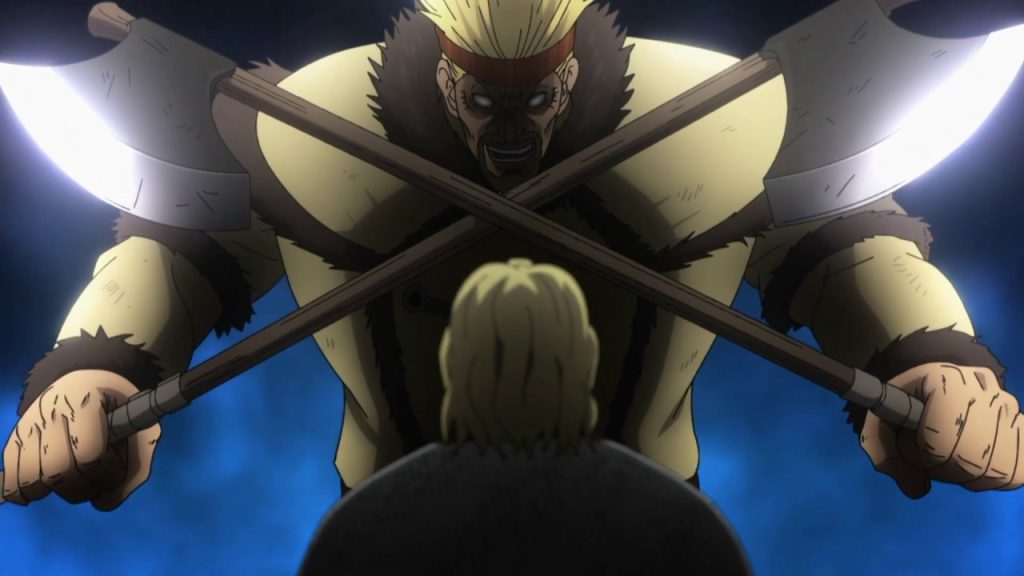 At number two, just missing the number one slot among our strongest Vinland Saga characters of all time is Thorkell!

I bet many of you could see this coming, as Thorkell was placed at the number two slot on almost every list, but we'll still break it down here anyways.

His Wiki Fandom actually does a great job talking about his abilities, and we'll use some of what they say to paint the picture: "Thorkell possesses superhuman strength, with the only person ever being able to beat him in the past being Thors. Thorfinn stated that one punch from Thorkell would be enough to kill him. Despite being massively huge, Thorkell is quick in close combat. Amongst his many feats include being able to lift an around 5 tons enormous boulder and throw it strongly enough to sink longships, throw several logs with ease and use/swing them as quarterstaffs, throwing a spear over a kilometer and killing several men with it in the process, kicking Thorfinn several feet into the air, punching a horse in the abdomen so hard it flies off in the air and most notably, bulldozing two houses on his own with his axe."

Coming in at the top slot among our strongest Vinland Saga characters is Thors Snorresson.

Thors, the Troll of Jom was the mightiest warrior in the entire land of the North Sea Empire – the strongest and bravest of all. During his military days, he was a ruthless and cold-hearted warrior; however, the birth of his first child changed him forever.

Here's how his Wiki Fandom breaks down his combat skills: "Thors possessed a mastery of hand to hand combat unparalleled by any other character thus far and was capable of fighting against multiple opponents in a melee. In 987, he defeated Thorkell in combat and knocked him out despite being unarmed, whereas Thorkell was armed with an ax. Despite settling down to the life of a farmer in Iceland, his combat skills remained sharp, although how he maintained them as a well-kept secret. Thus despite not having fought actively since deserting the Jomsvikings more than a decade before, Thors single-handedly defeated one of Askeladd's crews by incapacitating or disabling his opponents, including Bjorn. Despite this, he inflicted at worst broken bones and did not cause any fatalities."

Do you have any favorites that didn’t make the list?

We also have over 1,000 Workouts inside our Workout Database and HUNDREDS of Anime Inspired Workouts.

If you want to check out some of our Naruto specific stuff, here's some more links I shared before:

And, if this was helpful, don't forget to leave a comment below.

Welcome to The SHJ Army! 🙂