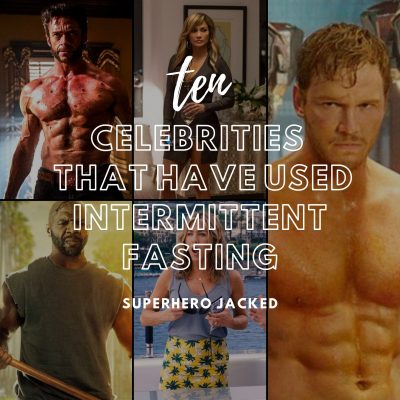 Intermittent fasting is something I have used every single day for years now.

It’s not something that I pretend to think of as some magic Super Soldier Serum, but it is a tool that I find super effective and efficient in allowing us to control our hunger in the manner we’d like.

We have had tons of success stories from members and coaches alike, and this is something we utilize in different variations within our own Superhuman System as well.

You can see more Nutrition Pillars (including the rest of the Pillars utilized in our 4-Tier-Nutrition-System inside The Superhuman System), and even our SHJ Guide to Intermittent Fasting if you’d like more of a breakdown after this article.

That being said, we’re definitely not the only ones utilizing intermittent fasting in all it’s variable glory.

This is a list of just ten celebrities who have also used intermittent fasting and seen great success.

Two of them have actually even sworn by it, one going as far as to call it his fountain of youth!

And, just to be clear before we even begin:

But, without further ado, let’s get crackin’.

I mean, who doesn’t want to be shredded like Wolverine?

Hugh Jackman is one of the two members of this list that I was talking about that swear by intermittent fasting.

Although, if you ask Delish they’ll tell you all of these actors I’m naming swear by it!

Jackman uses a 16/8 variation which means he fasts for 16 hours each day and then eats within an 8 hour window.

I actually even use a video of Jackman talking about his success with it in the full guide I shared above.

You can check out the full Hugh Jackman Workout Routine and Diet Plan here.

Next up on the list is another absolute badass.

Terry Crews is a man of many talents, just one of which is being able to make his pecks dance better than just about any other human.

Crews is the celebrity I was referring to when I said one of the members of this list refer to intermittent fasting as their fountain of youth!

Of course Crews pairs his intermittent fasting with an incredible diet, but he definitely shared a ton of information that is all included in his main article.

You can check out the full Terry Crews Workout Routine and Diet Plan here.

That means no honey between the hours of …

I’m sure Beyonce is like many others on this list (quite possibly with the exeption of Crews and myself who can’t live without it) who go in and out of different dietary restrictions that best fit her life at the moment (goals, lifestyle changes, etc; we get it, our Academy is literally built around that exact thing), but even if Beyonce is using it SOME of the time, I want to know about it.

You can check out the full Beyonce Workout Routine and Diet Plan here.

I mean when you see two badasses you have to follow it up with two of the hottest babes on the planet, right?

When I did my research on J-Lo I actually learned that she utilizes keto with A-Rod as well, so again, they likely switch in and out of their restrictions the same way we’d see others as well.

That being said, it seems like they like to keep it fairly intuitive throughout the main portion of the year, while training like crazy of course, and then tack on the game-time restrictions when it’s time to shred down the last bit of fat.

You can check out the full Jennifer Lopez Workout Routine and Diet Plan here.

Next up, supermodel Miranda Kerr!

I actually didn’t find a ton of information when doing research on Kerr for her article or for my book that pointed in the direction of her utilizing intermittent fasting if I’m being overly honest.

That being said, when I did follow up research on each specific diet and the celebrities that have used and/or tried them, I came across the Delish article I made mention to earlier and found out the Kerr has actually been rumored to have been “following it forever”.

You can check out the Miranda Kerr Workout Routine and Diet Plan here.

Cumberbatch actually put his intermittent fasting into play when it was time to transform his own physique into Doctor Strange.

No secrets other than a workout plan from Marvel coaches (don’t worry, we have you covered there) and a similarly structured 16/8 fasting schedule like I talked about Hugh Jackman utilizing.

I know, just when you think the list was going to get less awesome it just continues to spice up again.

Next up on the list is Batman.  Or Batfleck.  Or Benman.  Nope, not that one.

Some people think Affleck’s physique in his Batman workout scene was mainly CGI, but regardless of what your thoughts are in regards to that specifically: we do know Affleck put a lot of time in the gym to tack on a ton of muscle and shred some fat off his physique.

In order to do that, as we know, you also have to have a diet to go with it. So seeing him make this list should be no surprise.

You can check out the Ben Affleck Workout Routine and Diet Plan here.

Bring in the Pratt man.

I mean c’mon that’s Doctor Strange, Batman and then Star-Lord back to back to back.  It doesn’t get much better.

I led you with some X-Men/X-Force celebs to start and then I bet you thought that was the end of it…but not even close!

Pratt made his notorious transformation and then proceeded to take up some cross-training style fitness aspects like we use in our Superhuman System,  which at first he combined with a paleo diet, but then even tried out some intermittent fasting as well.

Pratt actually said “So I’m doing this intermittent fasting thing; don’t eat till noon, try to get my cardio in in the morning. It’s super exciting actor stuff,” regarding his fasting.

Oh, and don’t worry, we have the original transformation workout AND the comeback workout!

You can check out the Chris Pratt Workout Routine and Diet Plan here.

Okay, and not just one Queen, but TWO use intermittent fasting and end up in the same listicle?

Jennifer Aniston is actually a big case study in my book Superhuman Secrets among the women I talk about there because for the majority of her life she was able to eat fairly intuitively (of course healthy, but with indulgences and not really overly thinking about it), all while being fairly active and utilizing some yoga; but as she got older she actually kicked her training up a notch….or like three.

She started crushing cross-training style workout routines and including high intensity interval training and weights in there as well.

So, I obviously am not surprised to see her on this list, and if you’ve been keeping up with all things SHJ you shouldn’t be either!

You can check out the Jennifer Aniston Workout Routine and Diet Plan here.

Last but certainly not least is Vanessa Hudgens, who I actually admire as a woman utilizing some awesome nutrition tactics.

When I first wrote her full article I was really surprised to learn about all the awesomeness she includes in her regime, and the fact that intermittent fasting was one of them made it just that much better.

Hudgen described her fasting experience to Women’s Health as “”pulling a Benjamin Button”; which is similar to Terry Crews’ feelings towards it.

You can check out the Vanessa Hudgens Workout Routine and Diet Plan here.