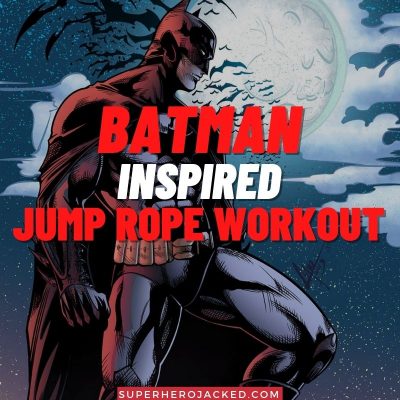 Being that we’re going back and forth, drawing inspiration from DC and Marvel characters as we build out our Jump Rope Workouts Database, it’s only right we finally see Batman.

Although, I should add that this week is a bit special as we’re getting THREE jump rope workouts as opposed to the normal two we see per week, being that I also added our Darth Maul Jump Rope Inspired Workout into the mix.

That being said, I’m excited to move onto Batman because I also want to give us a Top 5-10 Batman Inspired Listicle this week as well, and this one will be right there with them.

With that, you should obviously know that we have seen quite a few different Batman inspired workouts, but in that listicle I also plan on including heroes from the Bat-Family in general.

From that, we’ve actually seen what feels like more than two handfuls!

Which means we’ve already went over abilities, powers and stats as well.

BUT, we’ll still be using those powers, abilities and some other Batman characteristics to build this routine out.

And, if you’re a member of The SHJ Army (and even if you’re “NOT”…now you are!) you’ve probably noticed that our Workout Database is growing into all different areas, but being that jump ropes are so effective, efficient, and portable, I prioritized them for this database.

Our Superhuman System has been so successful that I also recently released our Jump Rope and Calisthenics 30 Day Superhuman Booklet for members to take advantage of as well (after running a 30 Day Jump Rope Challenge inside our Academy) and I’ve been blown away with the results.

Let’s talk about some of the inspiration we’re going to draw from Batman, though.

For this one we’re going to be focusing in on:

A jump rope is one gadget, sure, but I’ll also be adding other tools to this one as well.

With that we’re going to use both calisthenics and weight training to build our strength focus and work on gymnastic abilities, while also adding in some leg training with those weights to build power for the speed and agility also needed.

Our new jump rope workouts can be completed in multiple different formats and are extremely easy to scale.  They emulate our Superhuman System training and are incredible for both beginner and advanced users.  You can complete them by doing the “Rounds” as sets (and breaking in between), or complete the entire thing as a circuit with no break (while keeping track of your time and looking to improve the next time you do it).  You can also scale by dropping the sets, or scaling the movements; as well as adding breaks where needed.

If you want more training similar to this one you can grab our Jump Rope & Calisthenics 30 Day Superhuman Booklet that is built off the aspects we utilize in our Superhuman System and revolves around strictly jump rope and calisthenics to level you up!