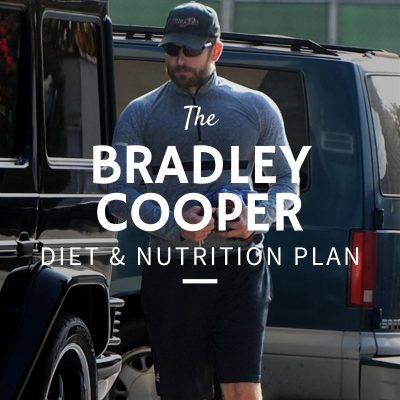 Bradley Cooper tacked on a ton of mass for his role in American Sniper, portraying hero Chris Kyle.

That being said, he did it in a way that he wanted to look bigger and bulkier, but it didn’t specifically have to be super lean like we’ve seen from guys like Hugh Jackman, Chris Hemsworth and a few others.

We actually even took a look at Hugh Jackman’s Diet Plan recently as well (the above link is to his workout routine and extra dietary research), and comparatively they were taking in similar caloric ranges, but Cooper was about 1,000 or so above, with less restrictions and less volume to his training.

GQ shares some information (which we’ll be using to build out the entire Bradley Cooper American Sniper Diet Plan below), from Cooper’s trainer that we can use to get some more insight to his massive nutrition plan:

“Bradley was coming off a movie where he had to be smaller,” says Cooper’s PT Jason Walsh. “We had to force-feed him. That was the hardest part.”

They continue by telling us a little about Cooper’s agreement with trainer Walsh:

Cooper agrees. “It was a real shock to my body. If it’s pizza and cake, that’s one thing. Putting 6,000 calories a day in your body gets old quick.”

From there they go on to talk about a bunch of the information we’ll be utilizing while building out the routine, with a bit more from Walsh as well:

His personal chef prepared five daily meals, but even that wasn’t enough. They supplemented with Plazma, a pre- and post-workout drink, and energy bars, both of which provide a combination of carbs and protein.

“Without that kind of caloric intake and the ability to recover, he probably wouldn’t have made it,” Walsh says. “His body just absorbed everything I threw at it.”

This type of dieting would generally be considered a “dirty bulk” because it tacks on more fat with the muscle mass than is generally necessary, but sometimes it can be effective for a quicker gain.

So be wary when you’re taking in this many calories on a daily basis, and think about what type of progress you’re actually looking to make.

Restriction One: 6,000 Calories a Day

Specific Restrictions: None, Makes Mention To “Pizza and Ice Cream” to hit calories, as long as Protein Goals Met