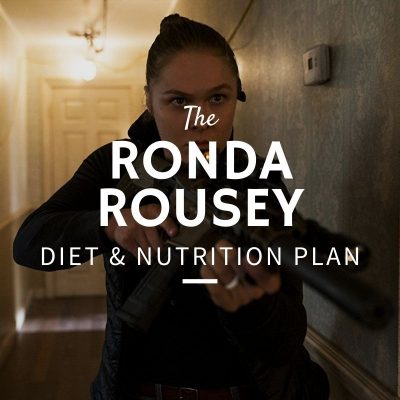 So we went from a soccer superstar with Carli Lloyd’s diet to an Olympic diver with Abby Johnston’s diet, and now we’re here with an MMA superstar!

These ladies diet plans are cranking it up to a different level!

Of the three Ronda Rousey is the only one we had seen at SHJ prior to these diet plan articles, and for this one specifically we’ll be building off what we already know from our original Ronda Rousey Workout Routine and Diet Plan to zoom in on her nutrition like we’ve done for a handful of other celebrities in our Celeb Diet Plan Database.

When we first took a look at Rousey’s nutrition we came across sources (specifically an interview with her) where she stated:

The diet encompasses whole foods that work to preserve muscle mass while expediting recovery time – tailored to meet your personal goals. Rousey tells the site, “It’s not really so much for tastes as it is for, like, sustenance… I’m just happy to have a full stomach. It’s not a bad thing to feel full and feel satisfied – you’re supposed to.”

Basically what Rousey was saying is that she eats for her training and for her body and overall health and much less for taste.

She also makes sure to mention that she feels full and “satisfied” which I think really sheds some light on how just because she’s not eating specifically for the flavor of the food does not mean she’s not enjoying it.

She is enjoying it with the way it makes her body feel and grow.

Rousey also shared a full daily diet plan that is awesome for us to build on as well.

I’ll be sharing all the details for you below and even giving you another opportunity to download the PDF version to print out and try for yourself!