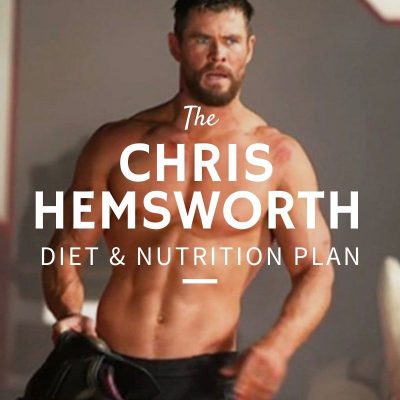 Chris Hemsworth has made quite a few appearances at SHJ.

His transformations have been pretty drastic, starting with his original bulk and shred to show off his incredible Thor physique.

We cover that and a ton of other information (including Thor 3) in our original Chris Hemsworth Workout Routine, but we’ve had much more since then as well.

We’ve also had our Chris Hemsworth Home Workout shared by his trainer, and a Chris Hemworth Ab Workout as well!

But now it’s time to really take a closer look at his nutrition and see just how it is Thor eats.

Although, the be clear: we’re talking about ripped and jacked Thor, not Bro-Thor.

Hemsworth has jumped in and out a few different nutrition phases and tactics, but more-or-less stuck to a pretty simplistic approach that falls right in with The Top Diets Among Celebrities.

We’ve seen him even try a vegan diet like his brother Liam Hemsworth for a bit, but now we’re going to actually take some information from his trainer on what REALLY seemed to work best for him while becoming Thor.

Here’s what GQ shares regarding Hemsworth’s nutrition in an interview with his trainer (and best bud) Luke Zocchi:

You can’t build a body like a superhero by eating like a peasant. In the past, Hemsworth has even gone as far as to say his physique is more about diet than it is training.

“It has to be very clean… Sometimes the amount of protein I have to eat can be overwhelming.” (We can think of worse things.) Zocchi shares three of his best bud’s favourite meals for different occasions.

I’ll be breaking down the specifics below for you so they’re nice and clean in a full diet (and cheat meal) format.

And, just to share what we had mentioned about his vegan diet for Thor Ragnarok from our original article before we move into this nutrition plan (more-so to show that even these big name celebrities switch it up and try new things):

‘That was a big experiment we tried to see if he could keep the muscle being vegan and it actually surprised me as well because we’re all in this mentality of ‘gotta eat animal protein, protein, protein’ but you can get a lot of protein from beans,’ said Zocchi in an interview with Today Extra. ‘It got a little gassy at times,’ he joked.

But, that was a very specific phase that Hemsworth tested, and he’s back to eating meats.

So we’ll discuss more of that with specific food groups below!

GQ/Zocchi: “Putting on muscle mass requires both carbs and protein so don’t be shy with the rice if you’re trying to pile on the pounds.”

Grilled chicken with a salad of rocket, tomatoes, a small amount of parmesan and balsamic dressing

GQ/Zocchi: “When stripping weight the opposite is true. Eating plenty of veggies will fill you up and limit calorie intake.”