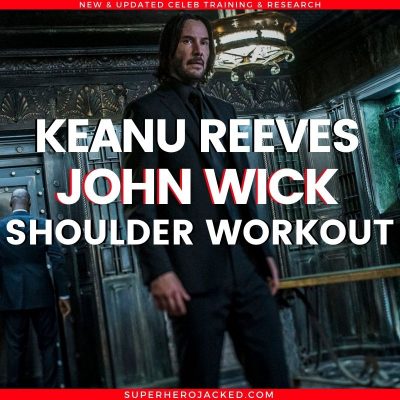 I told you we were going to have a shoulder workout theme going on this week.

John Krasinski’s Jack Ryan Season 2 Shoulder Workout we saw in the last article was pretty awesome, but what about some John Wick?

If you’re looking for a full Keanu Reeves Workout Routine and Diet Plan, we have that already inside our Workout Database, but this one is specific to a shoulder routine he did while prepping for the third film.

Murphy starts off by telling MJ:

“Keanu is an animal,” says Murphy. “I never have to convince him to do another rep. But or workouts are designed to make him feel good and strong, not destroy him. Because he is getting so beat up during the shoot as it is.”

So intensity for this one is on us!

Murphy goes on to state:

“John Wick needs crazy endurance, a powerful core, and grip strength,” says Murphy. “I spent a lot of time dreaming up different combinations and pairings of exercises.” There was also special attention paid to the shoulders, which got a lot of use during the jiu jitsu, gun-fu, Judo, wrestling, and other stunts.

“I pay a lot of attention to the lines that the body naturally wants to make,” says Murphy. “That is what I am doing with Keanu, working to encourage proper posture and alignment, which in the end gives him better leverage and strength.” These adjustments, along with recovery methods like massage and acupuncture, allowed Reeves to survive the shoots, while Murphy admits just barely.

“I am always blown away by his level of commitment,” Murphy says. “There are no quick edits to save him, he is stunt fighting with dozens of guys at a time, and really selling it. By the end of filming he is almost as battered and bruised as the character he is playing. There is the heart of a warrior in there.”

We’re looking to let out the heart of the warrior on this one.

Well, at least our shoulders are…

This workout is shared by Men’s Journal but courtesy of celeb trainer Patrick Murphy.