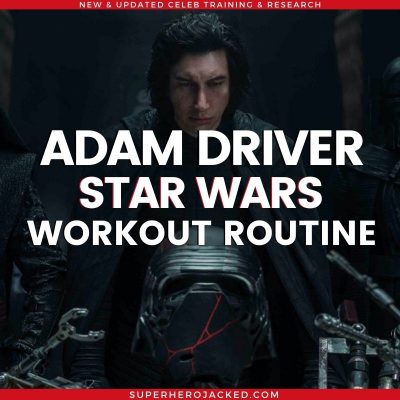 We have had a TON of different Star Wars Inspired Workout Routines, and Star Wars Celebrity Workouts at SHJ, but it’s time for another big one.

We’ve already had our original Adam Driver Workout Routine and Diet Plan article, but now we’re going to take a look at a specific chest and arm workout that Driver utilized while preparing for Star Wars: The Rise of Skywalker!

If you want to check out more Star Wars research and character inspired workouts you can use any search bar on the site and just type in “Star Wars” to see what we have!

We talked about that a bit in our original article, and the volume and intensity of this training session will show a bit of that as well.

Although this is really just an article about his training, his trainer does also share some nutrition information with Men’s Journal (who we’ll be pulling from for this one) as well.

The nutritional guidelines were simple—high amounts of protein and a moderate amount of carbs. The carbs were necessary to keep Driver’s energy up because of how heavy and cumbersome his costume was on top of the extensive fight sequences. That also meant proper hydration was always a top priority. There were a few occasions, like Driver’s shirtless scene, that required him to dial back the carbs and ramp up the cardio.

And this isn’t the first time we’ve seen Waterson. He works with a lot of big name celebrities to help them prepare for roles!

Shoot days were very demanding for Driver, from the action to wirework stunts. After days on set and training, Driver did dynamic stretching and utilized trigger point precision tools (think Theragun or Hypervolt) to curb any muscle soreness.

As well as giving some additional information about the training sessions before sharing the entirety:

Waterson had plenty of time to whip Driver into shape, given that filming took place over seven months. This workout is part of the pre-production period, where the goal was to put on lean mass and enhance Driver’s explosiveness. The inclusion of Olympic movements helped build up Driver’s chest and arms, which are showcased a few times during the newest Star Wars trilogy.

Remember what I said about volume and intensity?

Waterson gives these as extra directions to Men’s Journal:

“Directions: Kick off the workout with a 10-minute dynamic warmup, then start the adapted superset workout completing 2 to 4 rounds of the full program depending on your fitness level. Because this is a full-body routine, you can repeat up to three times a week, with a cardio and core day in between. As you progress, see if you can advance the number of rounds you can do.

The Finisher: Cap off the routine with this ultimate burner: 5 sets of 25 ab-wheel rollouts with a 1-minute plank in between sets.”