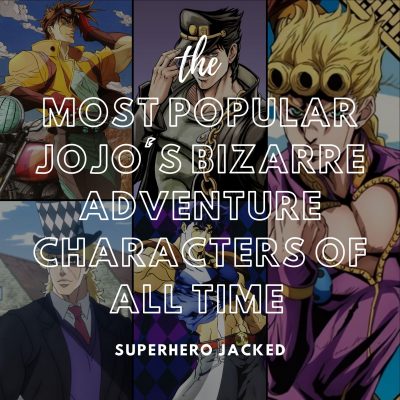 Jojo is definitely full of some bizarre adventures and interesting fashion senses. There is also an endless array of memes across the internet to show just how much fans love this series and its quirky ways. So today we are going to break it down amongst these characters and see who exactly the fans enjoy the most.

BUT, before I get into the popularity of these characters, I want to mention that Jojo is a part of our ever growing Workout Database. This series also features its very own Anime Database, as well as a Workout Quiz to help you find the ideal character workout for your goals.

Of course we’ve also done a handful more “Most Powerful” and “Most Popular” for other anime, so if you’d like to check those out you can visit our other listicles here.

For this one we scoured the internet for help and almost every single listicle has a different take on who the most popular Jojo characters are. So what we decided to do was compile ALL of them together and then took the average of all the compiled ratings and placed them in their slot accordingly. Additional characters who did not make it in the top ten that deserve a mention as well can be seen in the runner-up section.

At number ten of the most popular Jojo characters is the only female in the Jojo lineage: Jolyne Kujo!

Jolyne in her younger years was the epitome of teenage angst. She is not a fan of authority and has no problem speaking her mind. After spending quite a few years in prison and learning that the affection of her father was always present, she begins to mature and toughen up. These hard years shaped her into a courageous and confident individual who aggressively asserts herself. She is a not at all surprisingly brutal character who uses her stand to sever the limbs off her enemies and pay back any wrongs committed against her many times over.

Coming in at number nine of our most popular Jojo characters is the mighty Joestar mentor: Lisa Lisa!

Lisa Lisa, whose real name is Elizabeth Joestar, is the mother of our number three slot Joseph Joestar. She is an amazingly courageous character who trains with rock hard resolve and harsh lessons. Her harsh training is what molds Joseph into the warrior that he becomes, and is why she made it to number two in our Greatest Mentors listicle. In normal life, she acts with elegance and strong posturing with a deep interest in fashion, which if you’ve noticed, is an ever growing aspect of the series.

At number eight among the most popular Jojo characters is the sad horse racer: Johnny Joestar!

Johnny starts the series as a depressed paraplegic ex-jockey who was shot in the spine after antagonizing a passerby. This injury leaves him in a dark despair, as the life that he knew is instantly taken from him. Upon hearing of an ability that could bring back his legs and life as he once knew it, Johnny acts with ruthless determination to acquire this ability. He has zero remorse for killing his competition and achieving his goals. This ruthlessly selfish attitude extends to those he cares about and no obstacle will stand in his way. He is even ruthless enough to sacrifice himself, if that is ultimately what it takes to achieve his goals.

At number seven of our most popular Jojo characters is the ultimate healer: Josuke Higashikata!

This is one hell of a guy…

Josuke is a kind-hearted, confident and friendly individual who makes many friends throughout the series. Even learning that he is an illegitimate Joestar, he simply wishes to inform his father that he is doing well and could care less about making any claims to his heritage. He is the protector of Morioh and does so with deep resolve and bravery. He is not afraid to jump into danger to save someone, especially those who he cares for.

Plus, it is always fun watching Josuke’s intense emotional reactions to situations…

Number six of our most popular Jojo characters is the stunning vampire: Dio Brando!

Seriously… have you seen how this man carries himself…

Dio is first and foremost Jonathan Joestar’s rival. He entered into the Joestar family with the sole intent of taking the families fortune for himself. In a desperate attempt to bring more power to himself, Dio puts on a cursed mask which turns him into a vampire. Now, let me tell you, Dio is full of the glamour a vampire historically possesses, as well as the physiological enhancements. Throughout the various appearances of Dio in the series, one consistent factor that’s seen is the overwhelming loyalty and admiration his followers have of him. The Dio walk is almost as iconic as his viciously calm personality and his stand The World.

Coming in at number five of our most popular Jojo characters is the O.G. Jojo: Jonathan Joestar!

Jonathan is the first Jojo to be introduced into the series and begins the lineage that appears throughout the series. Even before gaining his Ripple abilities, Jonathan is a very athletic man with a great intelligence which he uses in a career of archeology. His drive and confidence is actually a product of his adoptive brother, Dio Brando. In his younger years, Jonathan was a bit more mischievous and had a lack of manners which he dramatically improves upon in challenge to Dio. The two of these men are truly what sets off the ever evolving world of good and evil which plagues each Jojo protagonist in the following arcs. His goal beyond defeating Dio, who eventually becomes a destructive force for his family, is to become a true gentleman, which can be seen in his character as he interacts with those around him.

At number four among the most popular Jojo characters is the stylish mugger Robert Speedwagon!

This man is a very different character to most here on this list. He is not in direct lineage with the Joestar or Brando family, but does play a significant part in the Joestar story. Though Speedwagon’s story may start off with a life of crime on the streets, he is truly a dedicated and loyal friend who is capable of smelling out the personality and intent of a person. As time progresses, Speedwagon becomes a very competent and honorable businessman, which spurs the creation of his very own organization. The Speedwagon Foundation goes on to not only assist the Joestar family even after Robert’s death, but also provides astounding medical research and ecological protection.

A true man to the saying that honor lives amongst thieves…

Coming into the top 3 of the most popular Jojo characters truly ages with the series: Joseph Joestar!

Joseph is a confrontational and aggressive youth at the beginning of his journey. He is a master of agitating his enemies, always seeming to find the right words to finish their lines and speaking their thoughts before they even finish speaking. He is a master of creating surprisingly intelligible schemes which take his enemies off guard with their zany tactics. Throughout his appearance in the series, Joseph does gain some maturity and gains a more composed personality. However, his goofy and boastful nature always remains the same, sometimes leading to quite humorous scenarios which make a fool of himself and puts a smile on the face of fans.

Coming in at number two among the most popular Jojo characters is the iconic Jotaro Kujo!

Jotaro is easily one of the most memorable characters in the Joestar lineage. His stand, Star Platinum, is a memorable powerhouse that has become a meme amongst fans for his iconic attack phrase. Though Jotaro begins his journey as a dismissive delinquent, it is seen that he is kind-hearted and cares deeply for those he likes. He is always calm under pressure, and even in the direst of situations maintains control of his emotions. It is ultimately through Jotaro’s actions and composure under pressure which finally brings an end to Dio Brando’s evil reign once and for all.

Coming in at number one of the most popular Jojo characters is the Gang-Star Giorno Giovana!

Giorno is first and foremost actually a Brando, though he was conceived through the body of Jonathan Joestar, who was possessed at the time by Dio. His stand, Gold Experience, is a clear indicator of his deepest compassions and strong resolve. It is capable of creating and manipulating life, which Giorno uses for recon as well as to heal his allies and himself. More often than not, Giorno intentionally injures himself as a means to throw his opponent off guard and make them think him insane, or in the least a man of insanely strong will. Similar to Jotaro, Giorno also has an extremely calm demeanor and stays composed even in the most dire of situations. Nothing stands in his way of becoming the greatest of Gang-Stars, which is made clear in his will to make this dream come true.

The Most Popular Jojo’s Bizarre Adventure Characters of All Time (Runner Ups):