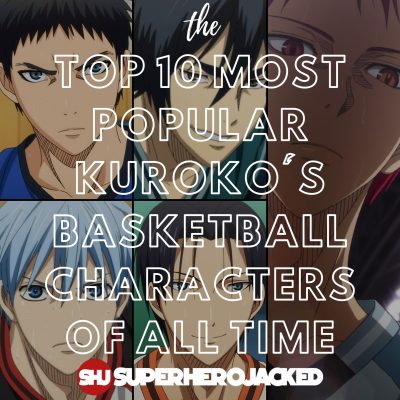 Based on the anime, the characters on the top 10 are really impressive and based on some web research, fans feel the same way – enough to vote for these Top 10 in three separate ‘Most Popular’ polls.

Kuroko’s Basketball is a sports anime, and we don’t have too many characters on the site under that category. If this becomes popular, that could change. The show has very ‘Slam Dunk’ vibes, but follows the trend now of giving athletes a specific sports ability, such as Seijuro’s Emperor Eye or Kise’s Perfect Copy.

BUT, before I rant about the popularity throughout the show TOO much (might have already done that), I do want to point out that Kuroko’s Basketball is one of the more popular sports anime shows right now – ranking 106th in a poll of over a million anime viewers.

We have our larger Anime Workouts Database as we’ve now been able to do for a handful of the most popular shows – and we also have our Workout Placement Quiz to help SHJ Army members find the best workout for them.

For this one, I scoured the internet for help and almost every single listicle has a different take on who The Most Popular Kuroko’s Basketball Characters are so what I decided to do was compile ALL of them together and place each character in the slot they averaged most as well as keeping the list to base TEN most popular and then increasing the length of the normal runner-up slots I normally do in no specific order.

TOP 10 MOST POPULAR KUROKO’S BASKETBALL CHARACTERS OF ALL TIME

Starting off our list of The Most Popular Kuroko’s Basketball Characters of All Time we have the Captain, Coach, and Point Guard of Kirisaki Daiichi – Makoto Hanamiya!

Makoto is one of the Uncrowned Kings, and is an intelligent but sadistic basketball player. He is well-known for his underhanded game tactics and he doesn’t really care about any person any more than how they are useful to his team winning. What makes him popular is the stark difference he offers to Kuroko’s positivity and his role in helping others score. They couldn’t be more polar opposites, and perhaps that contrast is what draws in people.

Coming in at number nine on the list of the most popular Kuroko’s Basketball characters in the former Captain and Point Guard of Kaijo High – Yukio Kasamatsu!

Yukio is a responsible and respected player among his team. He is strong-willed and he shows his determination in coming up with his game strategy that will allow his team to achieve victory. While his aim may be to win the Interhigh competition, he doesn’t allow his goal to forget the value of his teammates. He keeps them motivated during matches and tries not to show his anger or frustration when they miss a play. I find that while he’s good at basketball, it’s his general ineptitude with girls that makes him quite relatable and likable.

At number eight among the most popular Kuroko’s Basketball characters is the Small Forward of Shutoku High – Kiyoshi Miyaji!

Kiyoshi is NO DOUBT the scariest upperclassman because of his strict attitude towards his teammates and juniors, but also because of his strict training regimen. He has a short temper and often likes to hurl fruits at people he feels have messed up. What makes him popular is that he’s not one to be a hypocrite  – the same strictness he applies to others he also applies even more so to himself. He works hard and trains hard to achieve his basketball goals. I think we can all relate to someone who is intense in the pursuit of their goals, right?

Next up among our most popular Kuroko’s Basketball characters is the Captain and Power Forward of Too Academy – Daiki Aomine!

Daiki is undoubtedly one of the strongest players in the series. What makes him likable, however, is the fact that he still cares and looks out for his former teammates in Teiko Junior High – even after he transferred to Too Academy. When his new classmates said some bad things about Kuroko, Daiki defended him and attacked his new teammate. Something can be said about loyalty and the bonds that can’t be broken – certainly, this applies to Daiki as he retains his ‘soft spot’ for his former teammates.

Just missing the top five and coming in at number six among the most popular Kuroko’s Basketball characters is the former Vice-Captain of the Generation of Miracles – Shintaro Midorima!

Shintaro is a very reserved person and doesn’t really interact with people unless he needs to. He is very confident in his abilities and doesn’t like to pretend to like someone who he feels has inferior abilities. He however shows his care in a different way – such as giving advice to others, but he never takes credit for helping them. Who doesn’t like a guy who just genuinely wants to help people without any expectation for thanks?

Making it to the top five among the most popular Kuroko’s Basketball characters is Kuroko’s friend and teammate, Taiga Kagami!

Taiga has already shown that he has incredible basketball skills and can easily keep pace with much stronger opponents, but what really makes him popular is the growth that he has shown from being a short-tempered player to a player who thinks before he acts. He is very determined, ambitious, and stubborn in the pursuit of his goals.

At number four among the most popular Kuroko’s Basketball characters is Ryota Kise, the Small Forward of Kaijo High and former Generation of Miracles Small Forward. Ryota has the incredible ability to copy any basketball technique he sees, and perform it perfectly and with much greater power than initially done.

He is very friendly and cheerful with people that he respects and is quite upbeat with them even off the court. However, he shows a serious side to himself when he plays. He often tries to make all the shots himself and acts like a one-man team in the same manner his team played in Teiko. Like Kagami, Ryota has changed some, and instead of trying to claim glory for himself, gives up the shot so his teammates can score.

Coming in and making the top three among the most popular Kuroko’s Basketball characters is the Point Guard of Shutoku High – Kazunari Takao!

Kazunari has a very cheerful personality towards everyone, even his rivals in Seirin High. He often tries to get his more serious teammates to relax and just have some fun. Think of him like ‘Mikey’ from Teenage Mutant Ninja Turtles. He can get along with anyone and that simple fact makes him deserving of the Top 3 spot. Anyone who can play such a competitive sport but harbor no ill will is a good egg in my book.

Coming in at number two among the most popular Kuroko’s Basketball characters is the titular character and main protagonist of the series – Tetsuya Kuroko!

Kuroko has a rather deadpan and straightforward personality. He is a pleaser of people and will often prioritize their needs over his own. He has a weakness for cute animals, and he can be cheerful and warm up to people he spends time with, such as his friends and his teammates.

He is also a gentleman and knows how to behave around women, which often irks Aomine and Kagami. What makes him so popular is that he doesn’t seek the spotlight, but just wants to do his best to help the team achieve their goals. He shows his support through his action on the court, and as they say ‘actions speak louder than words.’

Coming in at number one among the most popular Kuroko’s Basketball characters is the former captain of the Generation of Miracles, and is the current captain of Rakuzan High – Seijuro Akashi!

Seijuro was originally seen as having a very condescending and superior attitude towards others. This was due to his upbringing with a ‘strong winners’ mentality where the strong deserve victory while the weak deserve nothing. However, as he plays and develops bonds with his team in Teiko his personality changes to one of respect and concern for their well-being and their overall development.

He encourages them to care for their health to the point that some of his teammates call him ‘mother’. What makes him the most popular is that he is both Kuroko and Kagami’s mentor but also their rival later on when his second personality takes over during his matches with Seirin High.

Would you place Kaguya at number one or does Naruto give her a run for her money?

The Most Popular Kuroko’s Basketball Characters of All Time (Runner Ups):