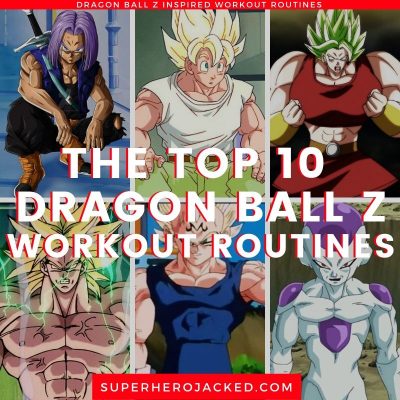 After making our Top Ten My Hero Academia Workouts Listicle I decided we need a Dragon Ball Z list as well.

Not to mention that two of our Dragon Ball Z character consistently show up as the top utilized and highest rated character workouts on the entire site.

And I’m sure you can guess who they are but we’ll talk more about it in a bit.

If you’re part of The SHJ Army you’ll probably know already that we’ve been seeing more and more workout styled listicles like this one on the site.

This is not only because they’re cool, but also because it’s a fun way to filter through old workouts that many of you may otherwise never get the chance to know are actually hidden deep in the depths of our Workout Database.

We now have well over 500 workout routines (and growing every minute) that make up the most comprehensive Workout Database on the internet.

That being said, listicles are also just fun.  That’s why we’re even writing more devoted to fitness gear, and other cool things like workout songs, playlists, and so much more.

But just to be clear about how this works: we’re going to be basing this listicle around a few things (none of which are me simply saying “This is an exact order of the best workouts from MHA”).

And those are all weighed in the same, although the coolest character and workout pairing might be ever-so-slightly lower than the other two when I make my decisions. But anywho… Let’s start with number one….

You guys had to know Goku was going to be first on the list, right?

Similar to the first on the list for our My Hero Academia listicle (All Might), both Goku, and Vegeta (Spoiler Alert: he comes in at number two for this list) have tops spots on our Top Superhero, Anime, Video Game and Character Workouts EVER on SHJ article; and therefore are some of the top routines on the site.

The SHJ Army loves Goku so much that we have actually had multiple workout routines built around him.

That’s a lot of Goku and DBZ training to get us started, but there’s so much more where that comes from.

For the sake of number on, I’m talking about the regular Goku Workout Routine, so that’s what I’ll be linking to at the top and bottom of this portion.

You can check out the Goku workout routine here.

Although I already spoiled it for you, next on the list is Vegeta!

Everyone wants to train like Kakarot and Vegeta; it’s a fact.  If you didn’t want to, you likely wouldn’t be here.

For that reason, the top two on this list were quite easy.  They’re very similar to one another (Goku and Vegeta train together, or for similar goals in the show quite often), with some minor tweaks to make them more unique to each individual character.

They were also our first ever Dragon Ball Z Inspired Workouts on SHJ and what led to many more anime and DBZ workout routines to appear here.

So here’s to Goku and Vegeta, but our list just keeps getting bigger…and bigger…!

You can check out the Vegeta workout routine here.

Next on the list we have some Legendary Super Saiyans coming in; starting with Broly!

And yes, I purposely made Legendary Super Saiyans plural…

Broly has always been a fan favorite, and definitely one of my favorites as well; and I”m super excited for what they did with him in the new Dragon Ball Super Broly movie.

His routine packs an extra punch, revolving around becoming even bigger than Goku and Vegeta’s training methods, while still having to allow for the endurance, fighting skill and movement that would come with being a Legendary Super Saiyan.

So it’s safe to say that this one is no easy workout!  But, if you’re looking to train insaiyan, then this one might just be for you.

You can check out the Broly workout routine here.

Number four is another Legendary Super Saiyan, this time of Universe Six: Kale.

Kale is also our first female on our list of Dragon Ball Z Inspired Workouts (although she is technically from Super, this is a compilation of all Dragon Ball characters), but certainly not the last!

Kale’s program is different than some of the other female programs on our list because she, like Broly, is HUGE and needs to be able to have the strength to be a Legendary Super Saiyan; especially when she takes the form.

That being said, it will not magically make the ladies of The SHJ Army look like Kale, the same way you won’t magically have the hormones to ever be capable of replicating it.  I know some women are afraid that lifting weights will make them “manly” or “too big” but I promise that’s not the case, and I do not want to scare you with any workouts that look to replicate the strength of these heroes.

But, of course, there are a ton of other options you can pick from this list if lifting heavy isn’t for you!

You can check out the Kale workout routine here.

Just like we started with Goku and Vegeta, we moved on into Kale and Caulifla!

Caulifla is the perfect counter to Kale’s massive physique and allows us to still train with the goal of becoming strong and toned, but doing so in a way that doesn’t necessarily revolve around lifting heavy weights.

Think of lifting weights without the idea of powerlifting and lifting as heavy as you possibly can.  It’s more of a personal preference type of thing that comes with your training than anything else!

That being said, I definitely recommend Caulifla’s routine for any ladies out there who are looking to step it up a notch and transform into their Superhero Physique.

You can check out the Caulifla workout routine here.

Time for some Frieza!

Whether you want to reach your final golden form or not, this one is definitely going to be taking you through different forms of your own physique!

Frieza has stood up against Goku, Vegeta and the whole gang (sorry, Krillin), with ease, so training like Frieza is definitely something many of you may want to potentially try out if you’re looking to get into Super Saiyan shape.

He has also been around for quite some time, and his character arch is pretty incredible, which makes him an easy pick for the number six spot on this list.

Whether or not you’re a Frieza fan is irrelevant to how awesome of a character he is; so if you’re looking to train hard and get shredded and strong, this could be a great option.

You can check out the Frieza workout routine here.

Can we talk about “over-powered” for a second?

Jiren is so incredibly powerful that it’s almost a joke.

You may have thought Toppo was strong (you’ll catch his workout later on), but Jiren blows him out of the water.

Coming in from Universe 11, training like Jiren is no easy task.  We need to train to be as powerful as Goku and Vegeta, and then step it up a notch again and again and again.

We train to be strong, fast, and insanely powerful in all areas, while also looking to achieve a big and aesthetic physique.

You can check out the Jiren workout routine here.

I bet you would have never guessed the next two come in at number eight and nine!

Gohan coming in at number eight feels soooooo late on the list, but we just have so many incredible Dragon Ball Z characters to train like that we could have just made the list even longer and just not ordered it with any criteria!

Gohan, like our other saiyan warriors, knows a thing or two about training.  From a young age with Piccolo (who will be on the list, don’t worry), Gohan has gone through a ton of training, and he continues to pick it up (although taking some time off here and there) into the later stages of the show.

He is also incredibly powerful, showing off just some of his potential when he was sent in to battle cell with the rest of the warriors.

So if you’re looking to achieve The Superhero Physique while training for strength, aesthetics, speed and more; this is a great option!

You can check out the Gohan workout routine here.

The basis of this training was meant to focus on Future Trunks; but all Trunks are awesome Trunks!

So whether you plan to pick up a sword or not, this one packs a punch!

Trunks is one of Ryan’s (YouTube: Donutman) favorite characters, so I wanted to move him up the list just because of that, but seeing as how we have his parts on the list, and he still makes the top ten, I think he comes in at the right spot.

His training style (in this specific workout routine) is very unique and fun, so if you want a change of pace this might be the one for you.

I know there are a lot of people who opt to cosplay as Trunks over one of the other main characters, so here you go!

You can check out the Trunks workout routine here.

Last but certainly not least on our top ten list is Piccolo!

Like I said for Gohan, Piccolo and him know a thing or two about training.

Even though Goku and Vegeta’s training goes to different levels and takes them to become the two most powerful Super Saiyans we have, Piccolo is beyond strong in his own right and was one of the very first characters to pick up training methods outside our core group of Saiyans working with Master Roshi and take on Gohan as an apprentice.

Although, if you really want to be like Piccolo you may want to throw on a weighted vest!

My DBZ fans out there know what I’m talking about.

You can check out the Piccolo workout routine here.

Bonus Workouts: The Rest of Our DBZ Inspired Workouts

There’s more where that came from!

As a nice, fun bonus, here are the rest of our Dragon Ball Z Inspired Workout Routines:

And, as we get more DBZ characters added on the site I’ll continue to add them here in this bonus section; but you can also find them all right in their Dragon Ball Z Inspired Workout section inside The Workout Database.

With Dragon Ball Z and My Hero Academia coming in as two of my top favorite anime shows, do you guys have any others you recommend me checking out?