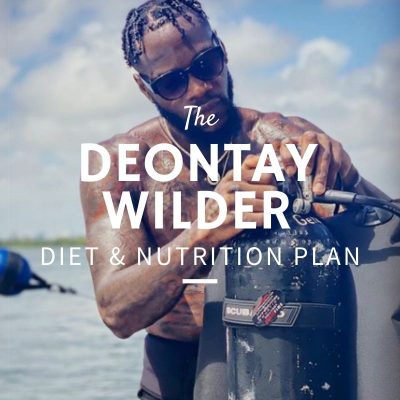 We recently had our Deontay Wilder Workout Routine here at SHJ, and considering we’ve been switching up the formatting of our workout routines, I figured we’d keep his diet and training separate.

The large majority of our Workout Database is NOT separated when it comes to training and nutrition among celebrities, but recently we’ve been making some new fun changes.

For example, we have our Celeb Diet Database that is growing quite quickly, so that is where this article will land for us.

On top of that we’ve been seeing a TON of updated workout routines among celebrities we’ve already had once at the site (we used to go back in and update the old article to have multiple routines, now we just update information but add the secondary routine as a separate article).

So Deontay is coming in as a part of some new awesomeness.

We’re lucky enough to have a couple different sources coming in for this one, actually.

When we shared his workout routine from Men’s Journal Wilder chimed in on why his training is different:

“I’m just very different from the average fighter and so I train differently than the average fighter,” Wilder tells Men’s Journal. “That’s why I’m able to do a lot of things. When you look at me, I’m big, but I’m agile and mobile, so it makes me flexible in the ring and able to move around. When you have the flexibility to move around the ring like I can, you don’t get as tired. I work on the basics a lot, and I do a lot of sparring as part of my camps. I also like to use swimming and water workouts as part of my training.”

To as mobile and agile inside the ting but still have as much power as Wilder it takes a specific way of eating as well.

Nutrition is obviously HUGE for body composition and aesthetics, but it’s also vital to how he is able to perform overall.

And all of that is outside of also needing to stay within his weight class and where he feels most comfortable fighting at.

For a specific diet plan we’re going to actually be pulling from Man Of Many, who shares an example of what Wilder’s daily diet looks like.

I’ll break the entire meal plan down below by specific meal, but here’s what they say about it overall:

Consuming up to six meals a day, Deontay Wilder eats eggs, sausage, pancakes, steak, sandwiches, yams, red potatoes, green beans, and pasta when preparing for a fight. He’ll also supplement with two protein shakes. When not prepping for a fight, he’s all about the pizza and Pepsi.

I really like how they also add in the fact that he’s all about his pizza and Pepsi when not prepping because it shows even the world’s greatest athletes are also human.

That’s exactly why we cut through the BS out there and work around sustainability, efficiency and effectiveness here at SHJ.
We’re looking to unleash our inner superhero and become superHUMAN.

(Man of Many lists this around 8 am)

**Man of Many also makes note that Wilder likes to bring Egg McMuffins into his diet quite often as well.**

Alfredo chicken pasta, corn on the cob, garlic bread, and another protein shake.

(Man of Many lists this around 2 pm)

(Man of Many lists this around 5 pm)