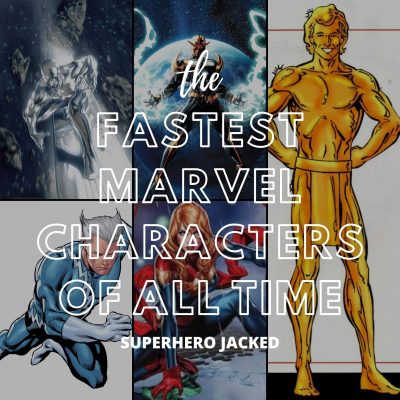 The Marvel Comics Universe has come out with a lot of different, fantastic, and amazing characters over the last few decades and it’s all thanks to the genius that is Stan Lee. When Lee started in the comics industry as a writer in 1939, little did he know that the characters that he would imagine would have such a profound impact on today’s culture. The heroes he imagined and brought to life have inspired many of us and reading about them has defined many a childhood.

As such, ranking the fastest heroes in ALL of Marvel is gonna be tough. I mean, I grew up reading the adventures of Thor, Silver Surfer, and Spider-Man and The Avengers, and I couldn’t even decide which character was my favorite – let alone who I thought the fastest character was. However, with the dawn of the internet comes an ease to gathering data and that’s what I did.

Honestly, though, this list was easier to create as a lot of the fastest characters mentioned here were also mentioned in another list, The Fastest Superheroes of All Time. The characters on the top ten deserve their slot, but their speed levels are so close that it’s hard to distinguish which character really deserves their spot on the list.

Before we start our list, I’d like to point out that Marvel is one of the biggest names in pop culture and I believe it will continue to be for many generations to come. That being said, we never really know what abilities new characters could have, so this list is not a definitive list and may still be changed in the future.

We have our Marvel Infinity War Workouts in a mini-database within our larger Superhero Workouts Database like we’ve now been able to do for a handful of the most popular shows – and we also have our Which Avenger Character Are You Placement Quiz to help SHJ Army members find the best workout for them.

For this one I searched far and wide and did more than a few Google searches to find some references to the Fastest Marvel Characters of All Time. After an exhaustive search, I have narrowed down the top characters to these ten. According to CBR, Screenrant, Fandom, and Marvel, these are the fastest characters in the entire Marvel universe.

THE FASTEST MARVEL CHARACTERS OF ALL TIME

Starting off our list of The Fastest Marvel Characters of All Time we have the young mutant with super speed and a very on-the-nose superhero name – Speed!

Thomas Shepard is a young mutant with the ability of enhanced speed. Not only can he run super fast, but he can accelerate the molecules of other objects, making them vibrate at insane speeds – and explode. Very neat trick when you’re fighting multiple opponents. Aside from this, Speed can become intangible and “phase” through solid objects, very similar to DC’s superhero The Flash.

Coming in at number nine on the list of the fastest Marvel characters of all time is the Messenger of the Gods – Hermes!

Hermes is the God of Speed – not to be confused with Godspeed (who is human). He is the fleet-footed messenger of the Gods of Olympus.

Hermes has been known to intercede in human affairs and even warns Wonder Woman on several occasions when there is an impending peril that would soon befall Man’s World. Being able to be in any place in a matter of seconds certainly is handy.

Major Carol Danvers, aka Captain Marvel, is a former American astronaut and USAF test pilot, who worked for NASA. She became head of security at NASA when it was infiltrated by a Kree soldier named Captain Mar-Vell. She was accidentally subjected to the Psyche-Magnitron and mutated on a genetic level becoming a Human/Kree Hybrid superhuman warrior. Calling herself Ms. Marvel, she established herself as one of the most prominent heroes on Earth.

In the Marvel Cinematic Universe, Captain Marvel is portrayed by Brie Larson. Her origin in the movie is very similar to the comics, with the exception that she seems to have gotten amnesia after being exposed to the Kree technology and was led to believe she was a true Kree warrior.

Next up among our fastest Marvel characters of all time is Monica Rambeau, aka Spectrum!

Monica Rambeau was born and raised in New Orleans, Louisiana. She was the daughter of Maria Rambeau, a successful seamstress, and firefighter, Frank Rambeau.

Monica was a lieutenant in the New Orleans Harbor Patrol. Fate came upon her one day when she gained superpowers after being bombarded by extra-dimensional energy, produced by an energy disruptor weapon created by a criminal scientist.

In the Marvel series WandaVision, Monica is portrayed as the daughter of Maria Rambeau, Carol Danvers’ wingman during her time on the USAF. She doesn’t seem to have any powers in the show, except to show that her exposure to Scarlet Witch’s warped reality seems to have activated some latent powers, shown when her eyes glow blue.

Just missing the top five and coming in at number six among the fastest Marvel characters of all time is Beta Ray Bill.

” I may not be a native son of the realm eternal, but the power in my hammer comes from Odin himself. So Beta Ray Bill fights for Asgard! On this day and all the tomorrows! “—Beta Ray Bill

Beta Ray Bill is a Korbinite, a race of beings from the Burning Galaxy, and was chosen by his people to be their guardian and protector to help them find a new planet to call home. On the course of this journey, Beta Ray Bill crossed paths with Thor, and they fought.

Because Beta Ray was enhanced by Korbinite technology, he was able to knock out Thor and lifted his hammer, Mjolnir. Upon seeing this, Odin brought both Thor and Beta Ray to Asgard to duel for the ownership of the hammer. When Beta Ray won, Odin granted him another hammer, Stormbreaker, and returned Mjolnir to Thor.

Pietro Maximoff aka Quicksilver is a mutant, and the son of Erik Lenshir aka Magneto. He is also the brother of Wanda Maximoff aka Scarlet Witch. In the comics, Pietro and Wanda are members of Magneto’s Brotherhood of Mutants, and are the foes of the X-Men.

In the Marvel Cinematic Universe, Pietro and Wanda are Sokovian twins whose parents were killed after one of Tony Stark’s missiles exploded inside their home. After this, they volunteer as test subjects for HYDRA, and develop powers as a result of their genetic experiments.

They are briefly aligned with Ultron, until they learn that his plan is to eradicate the entire human race. The twins team up with the Avengers and Pietro uses his superhuman speed to evacuate the citizens of Sokovia and help fight Ultron’s copies. Unfortunately, he dies while saving Hawkeye and few Sokovian stragglers from machine gun fire.

At number four among the fastest Marvel characters of all time we go out into space once more and recruit the first human Nova Prime, Richard Rider!

Richard Rider was an unsuspecting human until the day that the last remaining Nova Prime, Rhomann Dey, bestowed on him the power of the Nova Corps. This infusion of power granted Rider with the powers of flight, super strength, near invulnerability, as well as a personalized life support suit.

After his encounter with Dey, Rider was thrust into the fight against the alien that destroyed Xandar, Dey’s homeworld. Having defeated Zorr, Rider became the hero Nova: The Human Rocket and fought multiple villains in his superhero tenure. After a short stint as a human superhero, Rider was called to the newly reformed Xandar, to serve as its protector and guardian.

Coming in and making the top three among the fastest Marvel characters of all time is our first (and only) Eternal – the speed hero Makkari!
Makkari, like Runner, is obsessed with speed and has devoted his life to becoming faster – at the expense of his other abilities. As such, he can no longer run for long periods as his body accumulates fatigue toxins very quickly.

Coming in at number two among the fastest Marvel characters of all time  is the Silver Surfer! “One of the noblest and most tormented cosmic entities in the universe, the Silver Surfer treasures freedom above all else, but has often sacrificed his liberty for the greater good.”

Norrin Radd was a scientist on the planet Zenn-La, but when Galactus the World Devourer came, he pleaded with his life to spare his planet in exchange for his service. Galactus accepted and transformed Norrin into the Silver Surfer, imbuing him with the Power Cosmic, and allowing Radd to absord energy and travel at faster-than-light speeds. While once a herald of Galactus, he banded with the heroes of Earth to force Galactus away from Earth before he could devour it.

Race: Elders of the Universe

Coming in at number one among the fastest Marvel characters of all time is Runner!

While majority of these heroes were given or found their power later in their life, Runner has the natural ability to traverse the expanse of space in mere seconds. He is a survivor of one of the early galaxies after the Big Bang, and is obsessed with being the first being to see all that the universe has to offer. He regularly holds the Galactic Marathon to test the mettle of other speedsters and crown them the Fastest of All.

Would you place Runner at number one or does Silver Surfer give him a run for his money?

The Fastest Marvel Characters of All Time (Runner Ups):