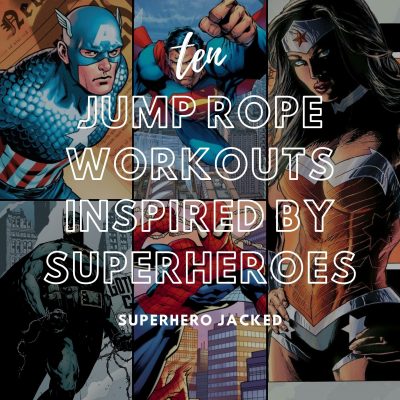 We’ve been slowly building out our Jump Rope Workout Database and we’ve officially made it to ten!

To make it easier for new members to not only find our database, but also out first ten jump rope inspired workouts before we move into other categories like anime and video game characters for inspiration, I figured we should start with our listicle.

I know how much you guys like our Workout Routine Listicles…

Since a lot of gyms have been close we started introducing tons of different variety and style of workout routines here at SHJ.

With that we had a TON of jump rope workouts just due to the sheer fact that a jump rope is one of the most effective and efficient tools for fat loss.

I even ranked it as one of the top two portable pieces of fitness equipment….ever.

And, if you’re now in the market for a jump rope…we have you covered there as well.

Here’s my list of the best jump ropes and speed ropes for every fitness level.

That will definitely get you on the right track to take on this list.

Number one has to be Wonder Woman.

Wonder Woman’s jump rope inspired workout routine was our first ever character inspired jump rope workout, and it was well before I even considered making a Jump Rope Workout Database at SHJ!

Wonder Woman has her lasso, and at the time I was building some character specific weaponry inspired workouts; now flash forward and we’re doing that COMBINED with our jump rope workout routines (as you’ll see more of below).

You can check out The Wonder Woman Inspired Jump Rope Workout here.

Next up is Darth Maul.

The reason I’m bringing him in at number two is because he’s the only non-superhero on the list, and also the only non-DC/Marvel character.

He’s also in a similar boat the Wonder Woman.

You can check out The Darth Maul Inspired Jump Rope Workout here.

But now we’re into our new Marvel and DC Jump Rope Inspired Workouts!

Starting with non-other than Spider-Man himself.

We just recently saw another list built on all our workout routines inspired by Spidey characters, so it only felt fitting to start this section of this list off with Spidey as well.

You can check out The Spider-Man Inspired Jump Rope Workout here.

Now it’s time to jump back and forth from Marvel to DC (although, TECHNICALLY we went from DC to Star Wars to start us off so I could have kept that going).

Superman brought us another twist with our jump rope workouts that began with doing some superman holds (of course), but also brought us into more of a strength oriented routine.

While I don’t go over all the hero’s powers and abilities each and every time like I do in a full character workout, we still base it around the characters powers and overall lore.

You can check out the Superman Inspired Jump Rope Workout here.

For this jump rope workout we take Captain America’s shield and instead we replace it with a weighted plate.

If you have a plate handy, we use all different fun exercises using one.

If not, we can easily substitute it with any other weight you have.

You can check out the Captain America Inspired Workout here.

I almost put Batman in place of Superman, but I wanted to go in order of how they landed on the site to be unbiased.

Like Spider-Man, we also recently saw a listicle combining all our Bat-Family Inspired Workouts at SHJ as well.

This is just one of the many Batman workouts, so once we combed through all the Bat-FAMILY routines, I noticed just how much The SHJ Army loves them.

You can check out the Batman Inspired Jump Rope Workout here.

Black Panther’s workout came at the same week I did Batman’s because I wanted to run with similar themes.

We focus on strength, parkour, calisthenics and an overall wide ranged skillset.

Black Panther’s powers are extremely diverse, which made it an awesome set of powers and abilities to build a routine around.

You can check out the Black Panther Inspired Jump Rope Workout here.

Starting with Green Arrow I wanted to make our way into the bow and arrow slinging characters slowly.

We utilize regular exercises that would strengthen an archers muscles that are used for the bow and therefore increase effectiveness.

Moving into our next archer we switched it up a bit…

You can check out the Green Arrow Inspired Jump Rope Workout here.

For Hawkeye we took a different approach.

Instead of using regular resistance bands or even weights we built this one around what is called a “Gorilla Bow”, which is essentially a bow with a band attached to it to use for specific exercises.

If you don’t have one, don’t worry, you can substitute other exercises quite easily.

You can check out the Hawkeye Inspired Jump Rope Workout here.

Last up on the list is a routine that works around two different types of cardio.

Soooo if you’re not a cardio person, this one might not be for you.

BUT, if you’re looking to burn fat, maybe come on back because it definitely IS for you.

With The Flash’s jump rope workout I still wanted to help us build speed but I also opted to take on the challenge of putting together training that incorporates both jump rope and speed with the Flash’s running.

I think we did it successful and we had a ton of members take it on!

You can check out the Flash Inspired Jump Rope Workout here.

That’s a wrap on our superhero inspired jump rope workouts that make up our Jump Rope Workout Database.