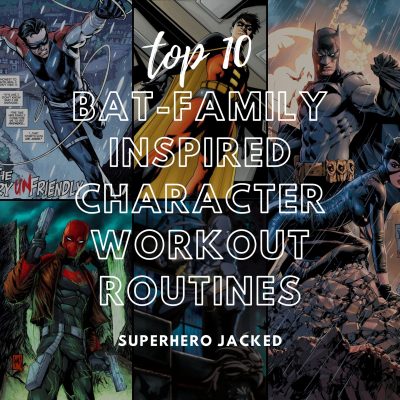 It’s well known that we love the Bat-Family here at SHJ.

We have seen countless Batman, Nightwing and Robin workout routines in all different variations, as well as a ton of other members of the Bat-Family that we’re going to be covering.

I’ll also be adding a good handful of double up workout routines for characters that we’ve covered multiple times in different variations like Batman and Nightwing; although those I’ll share below the base workout that I’m referring to in the list.

These are of course just a small fraction of the DC Inspired Workout Routines that make up a large portion of our Workout Database.

That’s why we even just rolled out our DC Themed Workout Booklet with over 150 pages of DC Inspired Character Workout Routines.

For this one though we won’t have a specific path to follow for which come first, we’ll simply be basing it on what I think are the most utilized and effective at SHJ, and the ones we have the most members raving about.

From there I may throw in some other favorites or just simply stick to whatever trend we’re following.

But, it should be no surprise who we’re starting with.

Without further ado, let’s get right into it.

Well, nothing like starting off with what is obvious.

We’ve actually seen a good handful of Batman Inspired Workout Routines, so I’m starting us off with more than just one workout.

Here’s a list of workouts we’ve taken inspiration from the man himself for:

So if you’re looking to train like Bruce Wayne, we have you covered with a ton of inspired workout routine.

We even have a Benchmark Workout Routine inspired off his abilities and characters in our Superhuman System as well.

We’ve not only seen a Dick Grayson inspired Benchmark Workout Routine in our Superhuman System, but we’ve also had paths inside our Academy built off of his character as well as a handful of workout routines land on the site.

Here’s some that you can jump into today:

So technically you already have seven workouts to choose from only two members of The Bat-Family.

And we have A LOT more where that came from.

Next up is a workout I have shared HUNDREDS of times.

We now have about 3-4 parkour workout routines that I share as resources for other characters that need some parkour training to go along with the other core workout that I build based on their character, but our Nightrunner Workout Routine is our first and one that is still my go-to.

It has calisthenics training and covers a ton of depth to get you started with your parkour training.

As the Batman of Paris, Nightrunner has also even taken the name “The Free Runner”.

You can check out the Nightrunner Workout Routine here.

We left Batman inspired workouts there for a second, but now we’re coming right back.

This one was a ton of fun to build and one I almost put with our other Batman workouts above, but I decided to split it up as this one is built off an entirely different character to draw inspiration from.

We see more calisthenics and a much different training style for this one, so if you’re a fan of the Batman Beyond aesthetic, this might be your best bet.

You can check out the Batman Beyond Workout Routine here.

Yes, we’ve already seen Nightwing, but now we’re going to run it down with a few in a row.

This one is built similarly to Batman’s original workout routine but scaled back a bit to be more fitting for Robin.

You can check out the Damian Wayne Workout Routine here.

Tim Drake’s routine is another fun one, but one that is built much differently than our original Batman and Robin, AKA The Waynes.

We draw inspiration from Tim Drake’s acrobatics, but it’s still built around calisthenics and stepping up our overall gymnastics ability.

If you’re looking to switch it up a bit from the workouts I shared above, this one is another great variation.

You can check out the Tim Drake Workout Routine here.

Red Hood, AKA Jason Todd, is back to being built around weights and circuits with a mixture of heavy training and high intensity.

You’re going to really need to step up you’re game if you want to take this one on, but if you need to scale down and work your way up, that’s great as well.

You can check out the Red Hood Workout Routine here.

Now it’s time for some of the ladies!

We’re going to start off with Batwoman, although next up (spoiler alert) is Catwoman and I almost felt like she should go first, I decided to split up Batwoman and Batgirl to make it more diversified for the ladies.

All if these workouts built off training styles that are great for the overall aesthetic that these comic character portray, which is a mix of incredible abilities with curved and toned physiques.

You can check out the Batwoman Workout Routine here.

Next up is Catwoman.

As I said above, part of me felt like she should actually come in at number eight, but I decided I wanted to split up the style a bit and also split up Batwoman and Batgirl to give you guys a bit of a swap back and forth if you’re going to be making your way through all of these workouts.

If not, none of these are better than the other, and it really just comes down to your preference of who you want to train like, and which style workout routine you’re going to most enjoy utilizing on a daily basis.

You can check out the Catwoman Workout Routine here.

And, to finish us off we have Batgirl!

Batgirl’s routine is one that we hit while we were going through our Young Justice characters.

We actually saw quite a few of them and I had a lot of fun building out that list, including all of our female characters.

So, if you like Batgirl, and/or Batgirls training, it’s probably a good idea to also go ahead and check out all our Young Justice Inspired Workout Routines as well!

You can check out the Batgirl Workout Routine here.

For this one I want to simply throw out another female member of The Bat-Family!

I really enjoyed writing up our Bluebird Workout as well, and it is completely calisthenics for you all who may be stuck at home right now.

But, that’s a wrap for us and the Bat-Family.