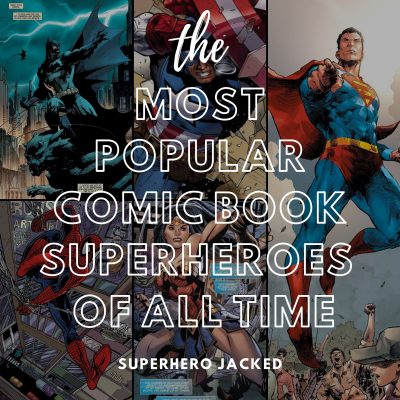 When I was researching to build this list I knew for a fact there was going to be a ton of members of The SHJ Army that didn’t agree.

But, I suppose that’s going to happen with any popularity based list.

These listicles started as a way to help members find workouts they may have forgotten about, missed, or just would have otherwise had a hard time finding within our Workout Database, but now they’ve grown into much more.

For this one I will not be using ANY of my own biased, and I also will not be taking into account anything to do with the characters workout routine we’ve built based on them or how effective I believe it is.

This is entirely based on research into user ratings and popularity of the characters.

Oh, and if you’re new here to SHJ, another awesome part of the listicles here is that not only are getting what you originally came for, but you’re also getting any workouts that we’ve built inspired by the characters of the list!

As always, leave your comments below if you were expecting other characters or even if you think this list is going to make some serious swaps now that MCU and DCEU are making such crazy moves!

MOST POPULAR SUPERHEROES OF ALL TIME

Wolverine is one of my personal favorite characters.  And that’s not just because he’s 5’3 in the comics and makes me feel good about myself.  It’s also because he’s an absolute badass of a character.

The X-Men and Wolverine movies only brought even more to his popularity, so I have a feeling he’s not going anywhere on this list of the top ten superheroes of all time!

Black Panther actually just topped our list as the richest superhero of all time and now he’s back as one of the most popular.

When it comes to discussing popularity and the changes the MCU will bring I don’t think there will be any change here; if anything he might deserve a higher spot on this list after Chadwick Boseman’s performance and the Black Panther film as a whole.

This one actually came as a bit of a surprise to me.  I think Captain Marvel is awesome and I think after her recent solo film and even Endgame she has grown even more in popularity, but I still thought we were going to see some other females in her place for now.

That being said, I’m happy she’s here because we have some killer workouts that were built using her as inspiration.

I’ll be honest: Aquaman has grown to one of my favorite characters mainly due to the fact that he’s portrayed by Jason Momoa.

I’m not sure if Momoa also had any effect over this list, but I would assume he might, even if it was purely for the way he played Aquaman and not also factoring in the fact that Momoa is also our Khal Drogo and Conan!

Similar to the others on his list I think Wonder Woman’s popularity is only on the up.  While some people might say her second recent film wasn’t as good as the first…let’s be honest for a second: when is it ever?

Either way Wonder Woman is an incredible female hero and Gal Gadot KILLS it in the role.

Iron Man is another character, like Black Panther that we just saw among the richest, although he came in second behind Black Panther, and ahead of the character that takes the third slot on this list.

Iron Man is one of the only two characters that doesn’t have a long list of powers on this list, and that second character is also that same one he beat out that now tops him among the most popular.

Can you guess who it is?

Captain America has always been one of my favorite heroes of all time.  That being said, I wouldn’t say he’s my all time favorite, but at the same time neither are any of the characters on this list (although some are pretty damn close).

With The Falcon and the Winter Soldier now streaming on Disney+ it’s a perfect time to tip our hats to Captain America, as I don’t think his slot on this list is moving anytime soon.

Jumping back to what I asked you when we went through Iron Man at number five…did you guess it right?

Batman came in at the third richest comic book superhero of all time, just behind Iron Man, but now joins Iron Man as the only other character without powers on this list.

Both characters also came in first and second (Batman in first) on our list of The Most Powerful Superheroes With No Powers as well.

I think it’s safe to say we could have all guessed the top three most popular superheroes of all time.  I think I would have jumped around a bit trying to figure out which superhero belong in what precise slot, but Batman and Spidey would have likely been my top two guesses if I had to say most popular Marvel and DC.

Of course I would have obviously been wrong, but hey, can’t always be right! 😛

I was about to just wrote “All of Them” for Superman’s powers, but I decided to give you a breakdown for the pure fact that every single other character on this list got one so it would be a little silly if the most popular superhero of all time didn’t get one!

Superman’s popularity is definitely well know, but as I admitted above, I personally thought we were going to see Spider-Man or Batman at the top slot.

The Most Popular Comic Book Superheroes of All Time [Honorable Mentions]: