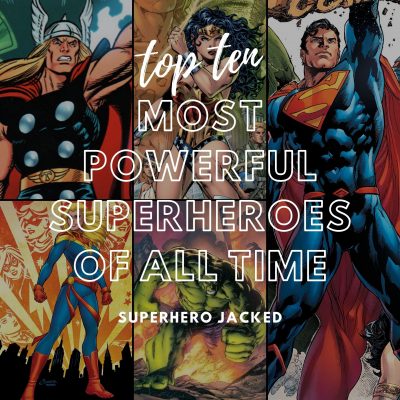 Today we’re trying something a little different than we’re used to.

Instead of going through a handful of workout routines that fall into a specific category, we’re going to be taking a look at a list of The Top Ten Most Powerful Superheroes Of All Time!

Our Superhero Workouts Database and Anime Workouts Database within our full Workout Database are growing in popularity each and every single day and it has got to the point where I think we need to expand on it and continue making it easier for you guys to find workout routines you may very well never find without these lists.

Of course we’re already doing that with our other Workout Listicles, but these may end up being more of a “fun” way of doing it so we do a Bam Smack Pow, 1-2-3 punch, of fun information mixed with awesome workout routines.

Some other fun listicles you guys may be interested in that aren’t exactly in the same category, but do fit the same script in terms of fun categorization in order to find routines, are:

And, of course, so many more.

There are also a ton of anime listicles and many of which revolve around the specific goal or style of the routine you can find as well.

But for now, let’s talk about the ten most powerful superheroes of all time.

For this one I’m going to do my best to put it in an order that I’m basing on research of other listicles, the characters powers and abilities, how they’re portrayed in both the comics AND the movies/shows, and my own understanding of the character(s) as a whole.

Some of them will be easier to put into a specific order while others will likely have a clump of 2-3 that seem like they could move up or down slots, but for the most part this is meant to be fun, so if you have any you would like to add don’t hesitate to comment below.

Also: I will be doing another listicle in the future on the STRONGEST Superheroes of All Time as well, so for this one we’re sticking to the overpowered heroes we all love and know so well.

TOP TEN MOST POWERFUL SUPERHEROES OF ALL TIME

Oh yeah! You guys might not be used to this, but we’re going in the REAL listicle style order now.

Starting with number ten and working our way down, unlike how I usually do it when the listicles revolve around the workouts and/or goals/style/etc.

Wonder Woman is insanely powerful and will likely rank at the top even among our STRONGEST superheroes as well when we do that one.  She is one of the strongest heroes on the planet and has even overpowered Hercules!

You can check out The Wonder Woman Inspired Workout Routine here.

Some lists have him in their top 10-20 while others don’t but I think being that we’re looking for well rounded superheroes and taking into account ALL their powers for this one he deserves a spot on the list.

As I mentioned above, there are a few heroes that could easily jump up and down a few spots, so I understand if you guys think he should be at ten and Wonder Woman higher, but this is just how I chose to score it being that his powers are much more unique than the rest of our list.

We haven’t seen as much Aquaman Inspired Workouts as we have for Wonder Woman, but we have seen a fair deal of Jason Momoa.

So you definitely have a ton to work with in terms of Aquaman training!

You can check out The Aquaman Inspired Workout Routine here.

At number eight we have our second super-powered female character!

Captain Marvel is INSANELY strong. I mean, we all saw Endgame, right?

MCU has portrayed her as one of, if not THE, strongest character within The Avengers.

And Brie Larson trained to get STRONG, so if you’re interested in that, that’s a good one for you!

You can check out The Captain Marvel Inspired Workout here.

Next up at number seven is The Flash.

I was personally going to have The Flash come in somewhere between eight to ten but based on research from other lists and articles I read to make this article more than just my own knowledge, he seemed to deserve a slightly higher position.

I suppose The CW portrayal has tainted the way I view the Flash apparently!

Either way he was making the list so I decided to trust the research as always and move him up a few slots. I’m also okay with it because his powers, like Aquaman’s, are also unique compared to the majority of this list.

Most of which revolve around running and our some form of stamina and agility training.

You can check out the Flash Inspired Workout here.

Technically speaking this spot is for Martian Manhunter, but would you believe me if I told you we don’t have workout for him at SHJ yet?

So I will only be able to share Miss Martian’s Workout Routine for you on this one, but there was no way I could make this list without at the very least acknowledging Martian Manhunters powers!

Oh, and I also promise to make Martian Manhunter’s Workout a priority for the coming weeks.

You can check out the Miss Martian Inspired Workout here.

I’m sure you all could have guessed this one!

We may not be talking about the STRONGEST in terms of mere strength for this article, but The Hulk’s strength and powers are enough to make him one of the top five most powerful superheroes as well.

We’ve even seen a few different workout routines and Hulks here at SHJ that you guys might find fun.

Ready to get strong?

You can check out the Hulk Inspired Jump Rope Workout here.

We don’t have a Jean Gray Inspired Workout or even Cosplay Workout, but we do have Sophie Turner!

Jean Gray is INSANELY powerful.  I was actually surprised she didn’t rank higher on a handful of the lists I checked out, but she is by far the most powerful female character in the superhero world.

You can check out our Sophie Turner Workout Routine to help you prepare to become Jean Gray, or you can use TONS of other routines here at SHJ as well that will do the job.

But, just be aware: none of the routines will make you as powerful, but they CAN get you ready to cosplay.

You can check out the Sophie Turner Workout here.

Here’s a fun one!

Doctor Manhattan is from Watchmen and our only character not coming from our typical Marvel and DC Universes.

Our newest depiction and portrayal of Doctor Manhattan came from HBO’s series Watchmen and it was amazing and inspired me to build his workout routine (luckily enough), but we also have a handful of other Watchmen characters here at SHJ as well.

So if you’re looking to train like one of the top three superheroes of all time, you have a couple options.

You can check out the Doctor Manhattan Inspired Workout here.

And then there were only two!

Thor is another character that can easily go up and down a few slots being that our top five is so insanely powerful (and I even have an honorable mention that could also have even taken this slot), but his power is endless in both the comics and the movies (more-so the comics) and he’s a fan favorite here at SHJ.

We’ve had tons of Thor Inspired Workouts and a ton of information about/from Chris Hemsworth.

Whether Hemsworth and the MCU moved Thor up a slot or two or not, he took the top 2-3 spots in a ton of other listicles I found during my research so I feel safe naming him here as well.

You can check out the Thor Inspired Workout here.

Did you guys see this one coming?  C’mon, you had to.

On every single list I checked with no exception, Superman was listed as the strongest and most powerful superhero of all time.  And I’m not about to be the one to kill that…mainly because he is, and I’m not a liar!

We’ve seen a handful of Superhero Inspired Workouts (naturally), and also a handful of actors who have portrayed him as well.

We also have our Henry Cavill Workout, Tyler Hoechlin Workout, Brandon Routh Workout, Tom Welling Workout, and since we were technical with voice actors for Wonder Woman, we also have to give Matt Bomer credit as his voice acts as Supe!

Think we have enough Super-Men?

You can check out the Superman Inspired Workout here.

Here’s that honorable mention I talked about before.

Silver Surfer is INCREDIBLY powerful and would likely make the top five pretty easily, but seeing as how we haven’t had a single routine that I could share to portray him above (and the fact that I ALWAYS add in a bonus or two) I decided to save him for the finish line.

Don’t forget to tell me what you think about the list in the comments and add any superheroes you think should be included in this one or future lists!