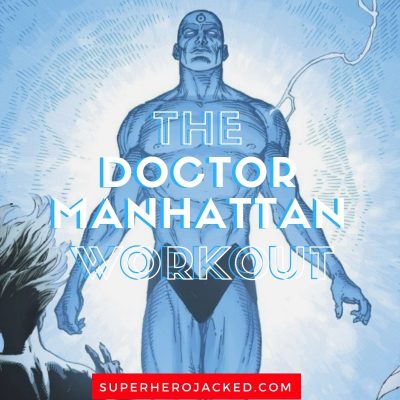 It’s going to be hard to match the last workout.

And by that I mean The Comedians.

The Comedian is a peak human condition and an absolute tank of a human, so our workout for him was INTENSE, but now we’re here for a character that is just God-Like.

If you don’t know why we’re seeing some more Watchmen characters after see Silk Spectre recently as well, it’s because HBO’s take on The Watchman airs this weekend and it’s definitely about time we give them their spot!

If we weren’t comparing him to characters, Doctor Manhattan would be considered in the tallest range among men we’ve seen at SHJ.

And while he still might be near that tallest slot among characters, it’s just not quite as impressive standing next to some of the other giants. 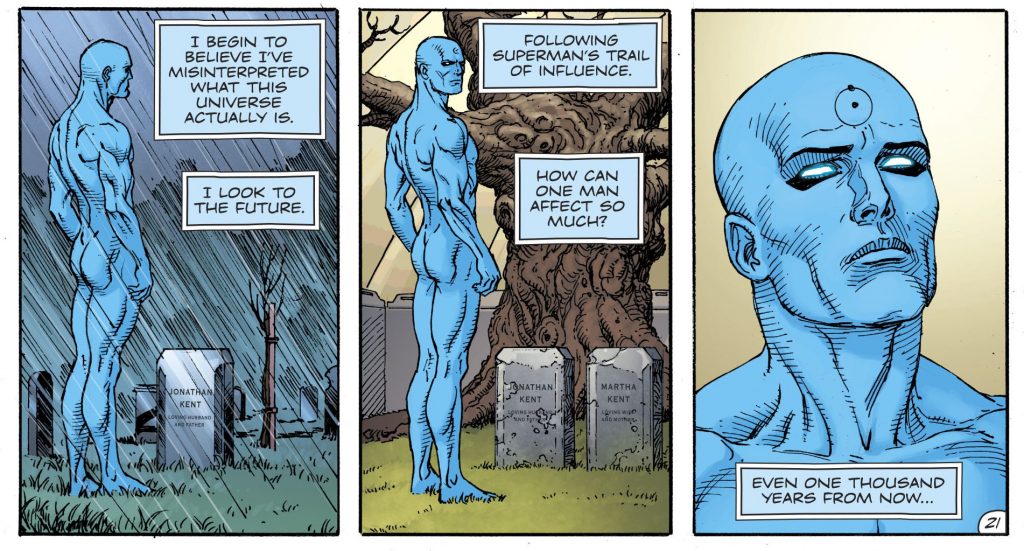 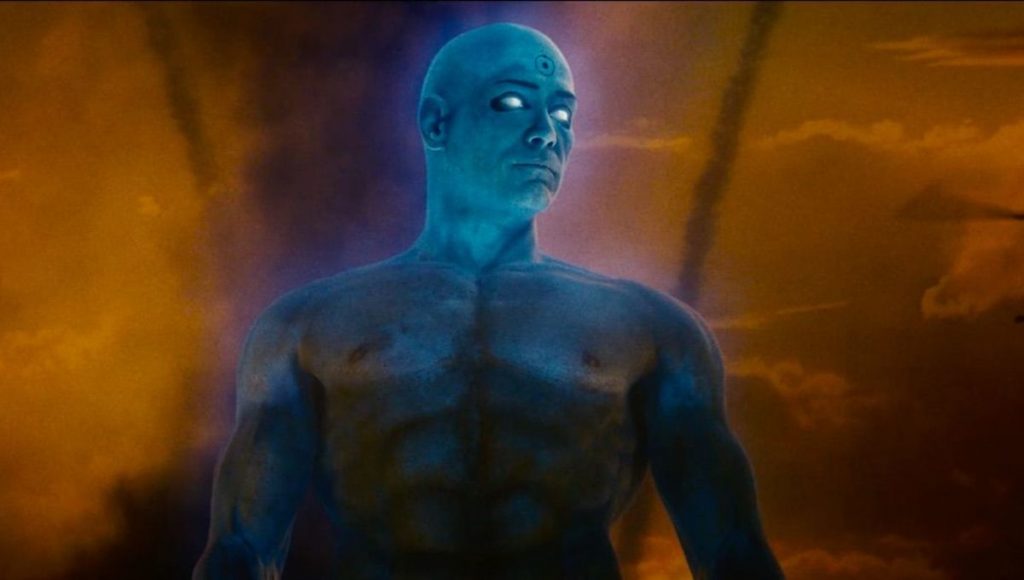 This is where I get to break down the “how” and “why” of the workout we’re going to build based on the characters, in this case Doctor Manhattan’s, powers and/or abilities.

As you’ll find out, Doctor Manhattan is pretty powerful.

Here’s a list of Doctor Manhattan’s powers as told by his Wiki:

Jon is the only character in Watchmen to possess superpowers. Throughout Watchmen, he is shown to be absolutely powerful and invulnerable to all harm; even when his body is disintegrated, he can reconstruct it in a matter of seconds and remains unharmed. He is capable of altering his size depending on his needs, for example, reconstructing himself in a much bigger form. He can hurl huge objects effortlessly with his hands. He is also unable to exhaust himself. Jon has complete awareness of and control over atomic and subatomic particles. He is also an omnikinetic. He does not need air, water, food or sleep, and is immortal. He can teleport himself and others over limitless distances. He is also capable of true flight, although he uses only levitation in most of his appearances. Due to his perception of time, he sees his past, present and future simultaneously.

In addition to these powers, Jon is able to phase any part of his body through solid objects without damaging them, produce multiple copies of himself which function independently of each other, project destructive energy, disintegrate people, create force fields, transmute, create and destroy matter, move objects without physically touching them (telekinesis), reverse entropy, repair anything no matter how severe the damage is, and, he suggests, create life. He also claims to have walked on the surface of the sun. At one point it is stated that, in the event of a nuclear war, he would be capable of destroying Soviet nuclear missiles while at the same time ‘destroying’ large areas of Russia. As a result of these capabilities, Jon becomes central to the United States’ Cold War strategy of deterrence.

They continue on by telling us this about some of his strength:

He effortlessly overpowered and disintegrated Pandora, who in turn overpowered the Seven Deadly Sins with ease, with each Sin being capable of destroying a multiverse the size of DC Comics several times over.

He is also capable of manipulating reality as he sees fit, as seen when he erased ten years from the DC Universe, when Barry Allen tried to bring his original universe back to normal. The intervention of Jon caused The New 52 timeline to be formed, within which most superheroes are younger and less experienced, and most of them lose their most important relationships before they even begin. Even Mister Mxyzptlk himself acknowledges Jon to be far more powerful than him. Such power makes him one of the most powerful beings in the DC Multiverse.

I apologize if this is a bit of a longer read than we’re used to, but I felt like he deserves it.

We had to do the power and background justice for a character like him.

And after all of that, I’m not sure if you can tell, but he’s almost so overpowered in so many areas that we can’t specifically target that it almost just makes sense to go a different route for this routine.

That route, although this isn’t a cosplay workout guide, is to train for the Doctor Manhattan physique.

Both in the comics and in the 2008 film, Doctor Manhattan is shown to be absolutely shredded.

Some would likely compare him to a Greek God.

Which is what we’re going to train to become for this one.

This one is going to be intense. Even though we’re not specifically training to be overpowered like Doctor Manhattan, we ARE training to essentially become chiseled like a Greek God. Prepare for high volume and intensity. Pair this with a good diet and be prepared for the shred.

30 Second Side Planks (Each Side)

For time:
150 wall balls at 20 pounds with 10-foot target (stopping before complete failure) 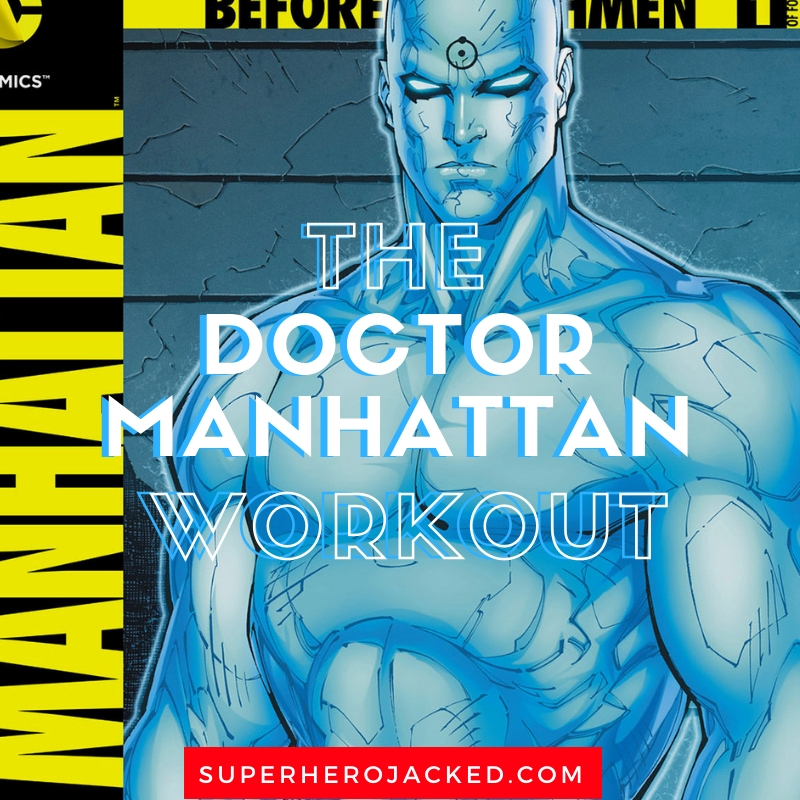 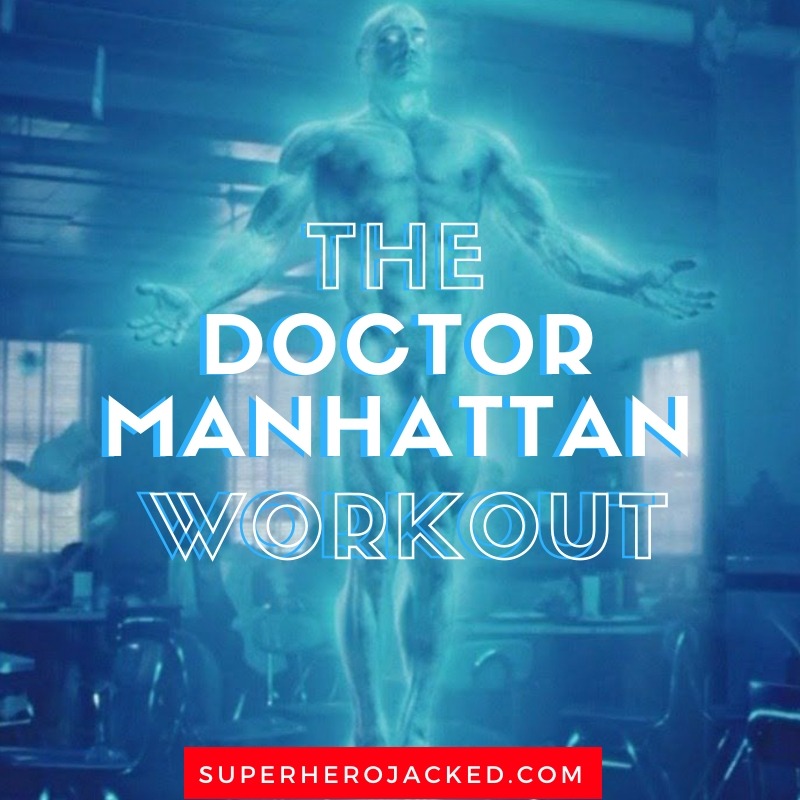 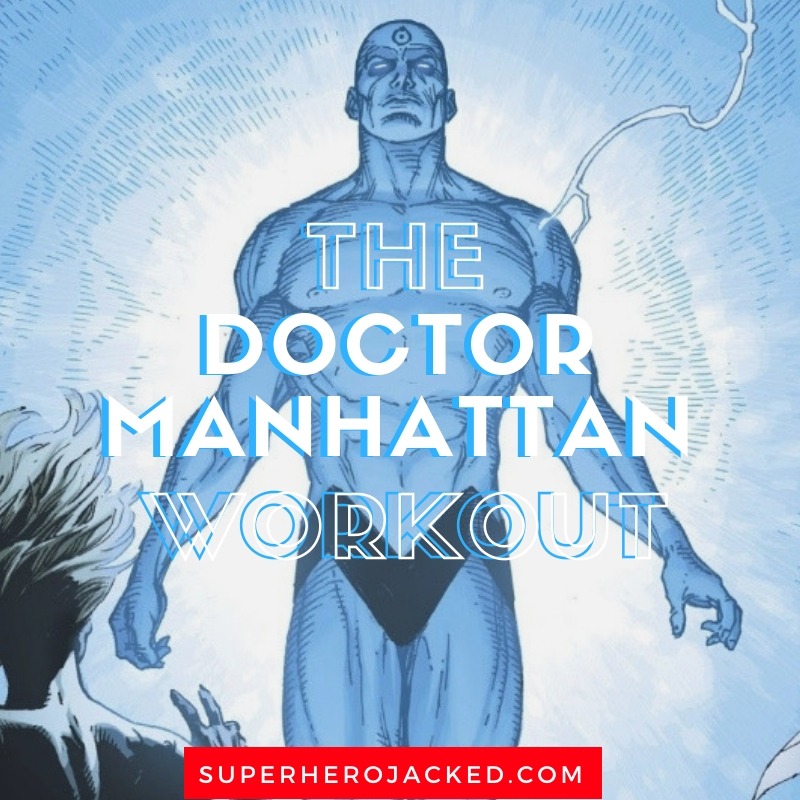