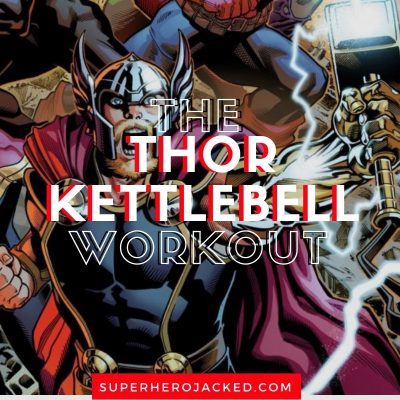 We’ve seen a few other Thor inspired workouts on SHJ, one of which was a similar theme to this one.

But with everything going on in the world right now I decided that small little swaps from our bodyweight and calisthenics workouts may be helpful for those of you who have some other equipment.

Even if that is just some of the stuff from our Build Your Superhero Home Gym Under $100.

But, before we go any further, I will point you in the direction of some other sources just in case you’re looking for them.

We have our main Thor workout routine, our Thor kettlebell circuit workout, and also our Ultimate Calisthenics Workout Routine & Guide for any of you who are stuck at home (and don’t have a kettlebell; or anything to sub it for).

As you can see I added a new category for Thor’s weapon, his hammer, AKA Mjölnir!

This will only come into play when we’re doing specific workouts that revolve around the character’s weapon like this one! 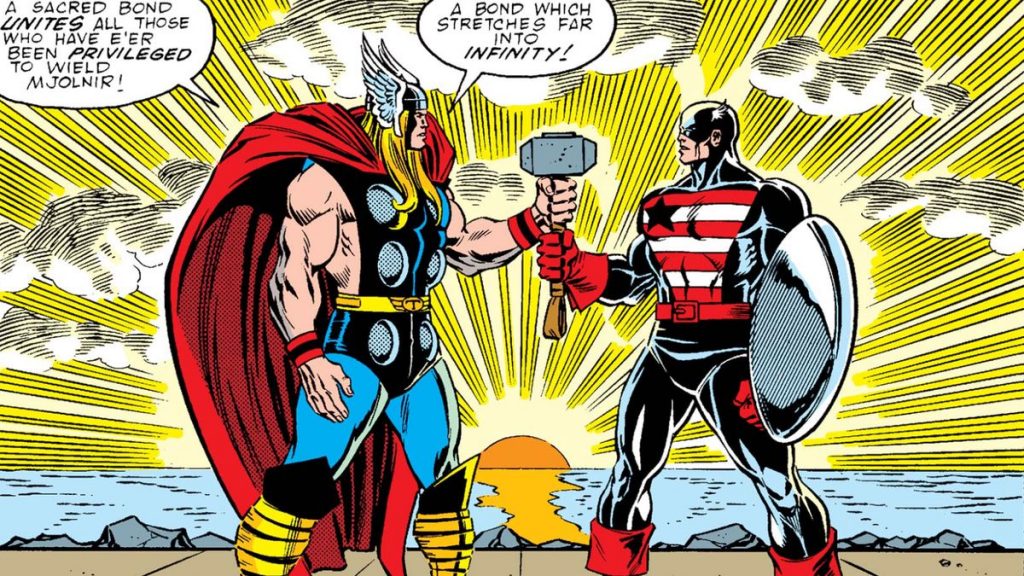 Now instead of giving you background information in a broad overview for Thor and his powers, I actually want to switch it up a bit and talk about Mjölnir.

So if you’re not up for a long read about the background of Thor’s hammer, you can go ahead and skip this part, because we’re still doing it!

Here’s what Wiki Fandom tells us about Mjölnir and how it came to be in Thor’s possession:

Mjolnir is the enchanted hammer wielded by Thor, the Norse god of thunder.

Ages ago, an unimaginably powerful cosmic storm called the God Tempest approached Asgard. Odin, chief of the Norse gods, battled the storm for many days when it threatened Asgard. Once the storm was weakened enough, Odin defeated the God Tempest by trapping it into a chunk of Uru that had been given to him by the Dwarves of Nidavellir as a gift, after Odin saved their realm from an invasion of Trolls.

From the Uru, Odin ordered the Dwarves of Nidavellir to forge Mjolnir. The blacksmiths Eitri, Brokk, and Buri needed to use the tremendous heat of a star to get the forge hot enough to manipulate the Uru. The hammer was completed in seventeen weeks. In the process the star exploded and almost took Midgard with it; that event may explain the extinction of the dinosaurs, about 65 million years ago. After Mjolnir landed on Earth, Odin who lost control of the hammer, found Mjolnir and regained it.

When Odin first tried to wield Mjolnir, he couldn’t control it due to the God Tempest still retaining its power. The hammer devastated Asgard as it flew out of control. Out of spite, Odin cast an enchantment on the hammer to prevent anyone else from wielding it. The hammer was stored away where it sat for untold ages where the God Tempest would eventually die, but its power would remain inside Mjolnir.

Although powerful in and of itself, the hammer also received several potent spells from Odin, who slew the Frost Giant Laufey with it.

Much later, Mjolnir was bequeathed to his son Thor, after he proved himself worthy through several trials. With few exceptions, Thor has carried Mjolnir throughout his adventures. Thus, the history of Mjolnir follows that of Thor. Although Asgard was destroyed in Ragnarök, Thor and the hammer, survived.

Now, backstory or not, Mjölnir does equipped Thor with powers that we’re not going to be getting from our kettlebell.

Some of which consist of:

So instead of thinking that we’re actually wielding Mjölnir, let’s build this workout in a way that gets us near worthy of one day wielding it!

This workout is to be completed 4 days per week.  The entire workout is done with just a kettlebell!

This is also created in conjunction with sourcing movements and ideas from Stack.

Kettlebell Step-Ups (hold the kettlebells at your sides): 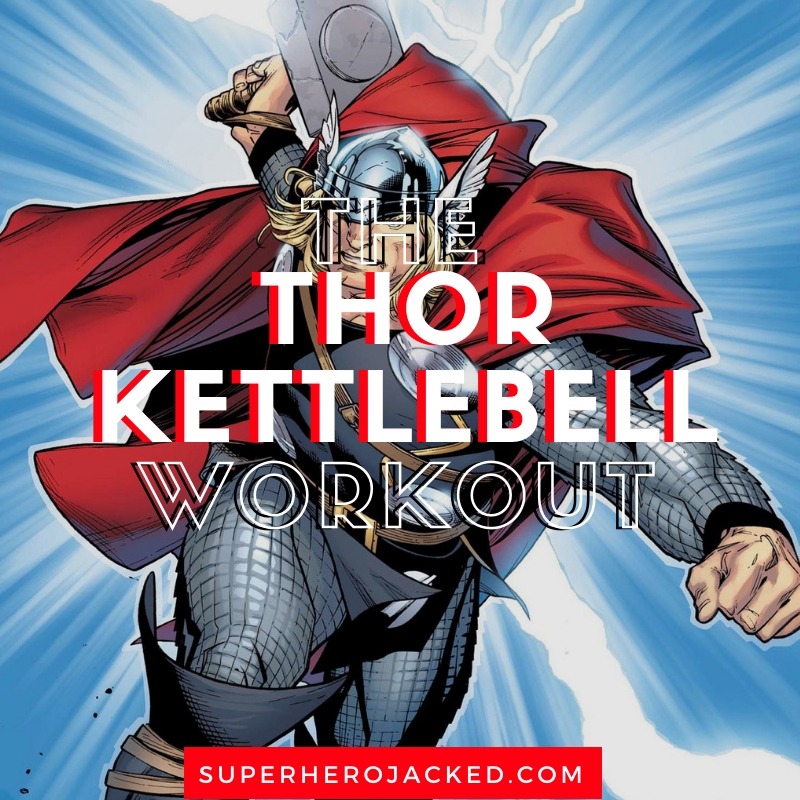 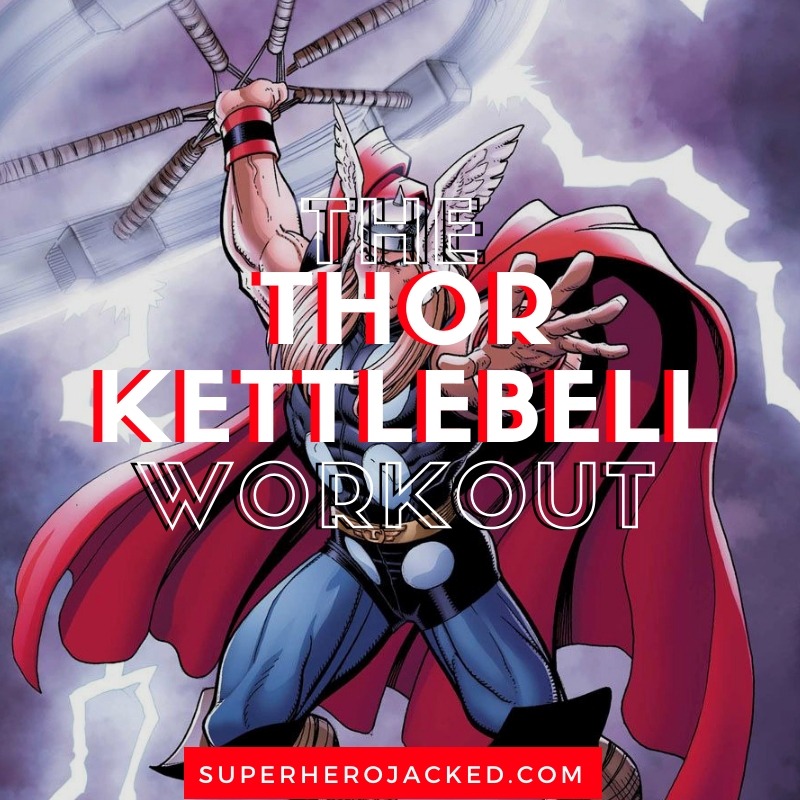 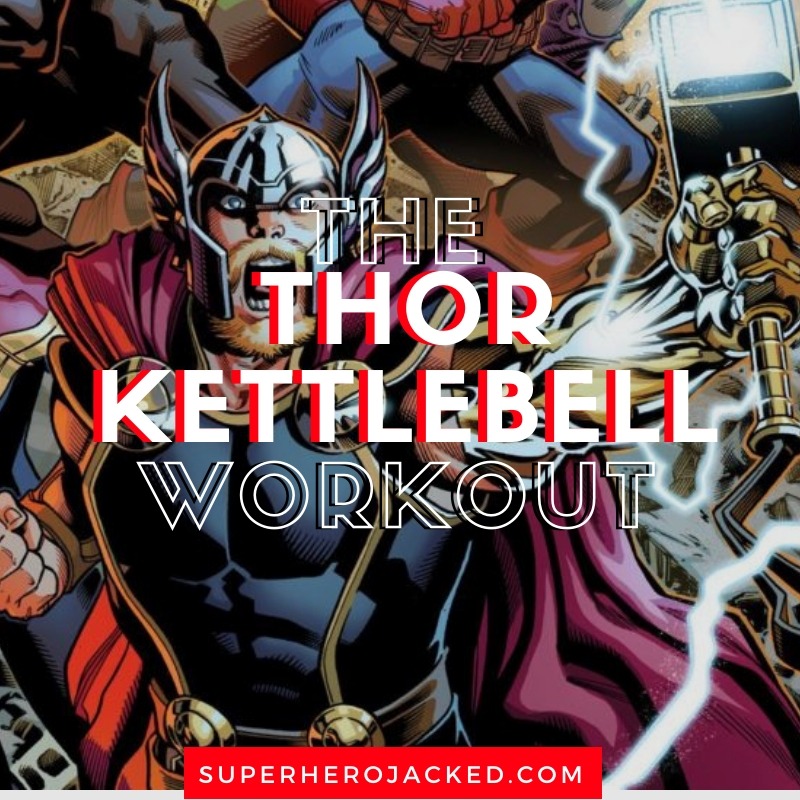