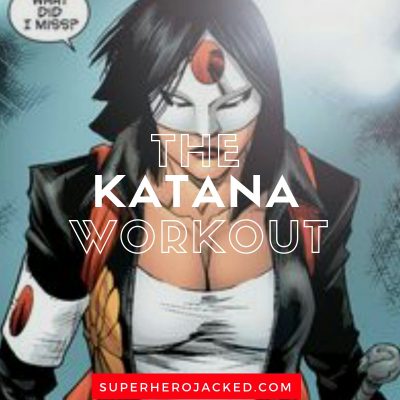 This is one I’m really excited to create!

After having Nightwing built around weights, calisthenics and mixed martial arts, I wanted to get in and hit a badass female heroine.

We were lucky enough to get a glimpse of Katana’s character in Suicide Squad, and I would love to see more of her if we get a second!

Margot Robbie and her Harley Quinn will be coming back in Birds of Prey, but Suicide Squad 2, while announced, only currently has rumored characters and celebrities.

Katana is one of the shortest female superheroes we’ve seen at SHJ!

Only one other character being even shorter.

This is where I get to break down the “how” and “why” of the workout we’re going to build based on the characters, in this case Katana’s, powers and/or abilities.

Tatsu Toro grew up in Japan where she was an Olympic-level martial artist.

Remember to keep in mind we’re talking about Tatsu Toro from Prime Earth and not Tatsu Yamashiro from New Earth.

And a synopsis that comes from the Wiki for both Katana characters:

Katana is a sword-wielding Japanese super-hero with magical weaponry. Her blade is the Soultaker Sword, a relic that steals the essence of those it slays and stores them inside. It was taken in a duel with the man who killed her family, Takeo Yamashiro. Batman eventually recruited her to become a member of his black-ops team the Outsiders during a mission in Markovia. She has also been a member of the Birds of Prey.

So we might even be seeing her in the Birds of Prey movie, although I did not see her casted YET!

Continuing into her abilities we get:

And the regular Wiki page gives us some information about her Soultaker sword:

Aside from her powerful sword, I find her incredible martial arts skills to be the most interesting information her.

We’re definitely going to use that for the routine.

With the bodyweight training and mixed martial arts stuff we’re going to be able to train at a really high volume.

Similar to how we’ve seen Daredevil train with multiple types of mixed martial arts methods (caught up on your Netflix series, guys?), we’re going to utilize more than one for this as well.  I’ll be providing you with multiple styles programmed from Coach Derek to utilize with a simple bodyweight routine to throw in 3 days a week.