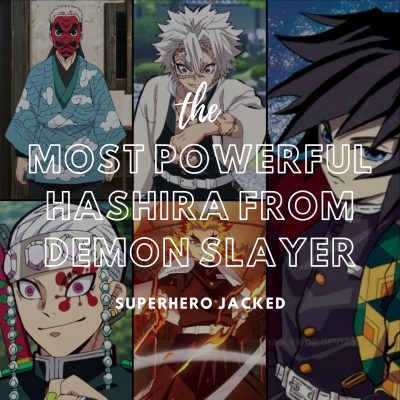 Demon Slayer has been on a roll here at SHJ lately.

Workout after workout has been rolled out for this anime as well as various articles. We have written about the strongest amongst the demons, but now it’s time we talk about the most powerful men and women who are given the task to tear them down.

BUT, before I get into the power of these characters, I want to mention that Demon Slayer is a part of our ever growing Workout Database and has it’s very own mini-database specific to the anime within our Anime Workout Database.

For this one I scoured the internet for help and almost every single listicle has a different take on who the most powerful Hashira are. So what I decided to do was compile ALL of them together and then took the average of all the compiled ratings and placed them in their slot accordingly. Additional characters who did not make it in the top ten that I want to mention as well can be seen in the runner-up section.

MOST POWERFUL HASHIRA FROM DEMON SLAYER

Starting off our list of the most powerful Hashira is likely to kill you with her love: Mitsuri!

Mitsuri is a very interesting character in that her breathing technique is actually built from flame breathing.

Guess you could say she loves with a burning passion…

She also utilizes a uniquely malleable blade that is more whip than sword. This blade allows her to possess one of the fastest attack speeds among the Hashira. She is also quite dense in body, requiring massive amounts of calories to maintain it. This is mostly hidden within her small frame, leaving enemies to quickly underestimate her strength.

Coming in at number nine of the most powerful Hashira is the medical expert Shinobu!

Shinobu is more or less the nurse of the Hashira, but do not underestimate this medical genius. She is known as the Insect Hashira due to her particular breathing ability. She attacks with a stinging effect that injects demons with a powerful weakening poison. This poison is created from Wisteria flowers, a deadly plant for demons, which she was even capable of injecting it into herself and basically turned herself into a walking poison sac.

At number eight among the most powerful Hashira of all time is the snake master Obanai!

Obanai is a very unique Hashira in the Demon Slayer series. Of particular note is his ability to use his snake, Kaburamaru, to sense nearby enemies, even when blinded by an enemy. His combat style is similar to that of his trusted companion, where he almost seems to slither through the battlefield, attacking with his powerful crimson blade. Obanai even possesses the ability to decapitate multiple enemies at once.

Coming in at number seven of our most powerful Hashira is truly of the hidden mist: Muichiro!

Yes that was a play on Naruto’s Hidden Mist Village…

Muichiro is typically seen wearing baggy clothing, believed to help obscure his movements. He is capable of using a personally created seventh breathing form which causes his enemies to be disoriented. Similar to that of Killua from HunterXHunter, Muichiro moves with a particular tempo that can cause his image to become hazy, but in Muichiro’s case his movement becomes a large cloud of mist which he utilizes to disorient his enemies. In general, Muichiro seems to move like mist, capable of rushing into the face of enemies quickly.

Number six of our most powerful Hashira is the Kratos of Demon Slayer: Tengen!

Yes I refer to his giant chained blades…

Tengen is one of the only slayers who utilizes two weapons, and they certainly match his explosively outgoing personality. Tengen tends to attack both with his massive dual cleavers, as well as sets of bombs he carries on himself. These bombs are said to sound like crashes of thunder as they go off among the enemy. However, as aggressive and destructive as Tengen may seem, he is actually a master of controlling his explosions and massive attacks, ensuring that no civilians in the area will be caught in the catastrophe.  Tengen also possesses enhanced hearing, which he can utilize to look for key openings in the beat of an enemies movement, as well as use echolocation when necessary to analyze his surroundings.

Coming in at number five of our most powerful Hashira is the beloved sensei of Tonjiro: Sakonji!

Sakonji is basically the reason we have a main character in Demon Slayer, as well as the teacher of our number two Hashira, Giyu. He is capable of utilizing ten forms of water breathing, which perform various offensive and defensive functions. His particular method of breathing brings his strength and agility to levels in par with Demons. As the former water Hashira it can be assumed, especially looking at the skill of his former students, that he was a force to be reckoned with and can still hold his own.

At number four among the most powerful Hashira is a man who certainly sets fire to the hearts of fans: Kyojuro!

Seriously how can you not love this guy…

Kyojuro is a man of burning passion who brings enthusiasm into any situation. In battle this enthusiasm is replaced with immense focus as well as indomitable will that makes him a force to be reckoned with. Just in his Flame Breathing First Form: Unknowing Fire, he is capable of decapitating demons in a single slash before they even know what hit them. One of his most devastating attacks, known as Rengoku, truly shows his passion to slay Demons however. When this attack is unleashed, it leaves behind deep,  burnt impressions in the ground, showing the sheer power that’s released from it.

Coming into the top three of the most powerful Hashira is the human hurricane Sanemi!

Sanemi tends to attack his opponents with massive gusts of wind and tornado like bursts. Any enemy who is unlucky enough to meet this guy in battle is met by a gust of slashes which cut from all sides as the torrent envelops them. Many of his breathing forms cause disorienting gale force cuts which absolutely shred his opponents. It is needless to say that if the enemy thinks numbers matter against this guy, his Ninth Form: Idaten Typhoon is capable of tearing apart anything, including multiple enemies, that are beneath him when he unleashes this storm.

Coming in at number two among the most powerful Hashira is what Tanjiro can only dream of becoming: Giyu!

Giyu is a ruthless and reserved slayer who believes in justice over anything. That being said, his hatred of demons does not seem quite as that of his comrades, though it still takes some convincing from Toshiro to initially spare the life of Nezuko during their first confrontation. He is considered the greatest user of the Water Breathing technique, even impressing upper rank demons with his skill. He possesses a self created Eleventh Form: Dead Calm, which allows him to deflect and counter any incoming attacks while he is able to maintain this state.

Coming in at number one of the most powerful Hashira is the stone giant himself: Gyomei!

Gyomei is an absolute monster, standing at 7’2″ and weighing in at 287 lbs. Tanjiro and Inosuke are found noting to themselves that this monster, though typically displaying the gentle giant archetype, is the most powerful Hashira of the Demon Corps. Before I go on however, let me mention that this legend is also blind, which only leaves a greater impression on Demon Slayer fans.

He is capable of sensing enemies through the Transparent World, a space where he is able to predict movement naturally, as well as possesses enhanced hearing to analyze his surroundings. Gyomei is also one of the only slayers to utilize dual weapons, a flail and axe. He utilizes these weapons in a way you can imagine a Stone Hashira would. Many of his Stone Breathing attacks involve crushing his opponents with overwhelming force. One particular technique of note is his Fifth Form: Arcs Of Justice, which first hits with his axe, and then is followed up by a blow from his flail, causing his opponent to be crushed in between the two as he continuously barrages them from both sides.

The Most Powerful Hashira In Demon Slayer (Runner Ups):